This month’s list features books titled after quotes from the works of Shakespeare, words and phrases which have made their way into the names of books ranging from mystery to romance to science fiction. 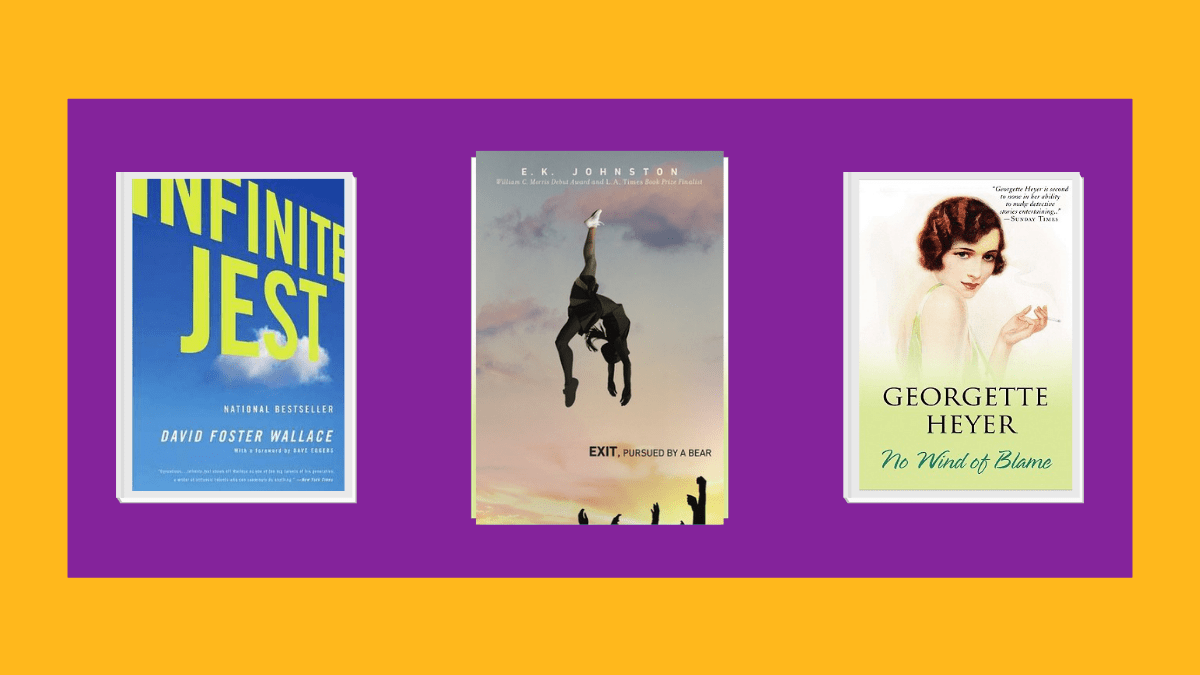 William Shakespeare, one of history’s best-known writers, authored dozens of plays and hundreds of poems, and originated words such as “gossip,” “dauntless,” and “negotiate” which are still part of our vocabulary today. His works have inspired novels such as Vinegar Girl by Anne Tyler (DB 84781) and A Thousand Acres by Jean Smiley (DB 33926); movies including The Lion King (DVD 1881), She’s the Man and 10 Things I Hate About You; and musicals like West Side Story and Kiss Me, Kate, alongside the thousands of adaptations and interpretations of his original plays. But it is not only the stories themselves that have influenced later writers. This month’s list features books titled after quotes from the works of Shakespeare, words and phrases which have made their way into the names of books ranging from mystery to romance to science fiction. Even if you skimmed over Shakespeare in school, you might find that there’s something to enjoy inspired by his words.

Drawing on journals, letters, and interviews with veterans of Easy Company, the author tells the story of the combat rifle unit that parachuted into France early on D-Day. And, despite hardships and casualties, E Company was responsible for the capture of Hitler’s Bavarian retreat at war’s end. Some strong language. 1992.

Title from The Tempest

A satire set in a future technocratic society in which people are rigidly classified by the state and kept happy by a government-administered drug. When two bureaucrats, Lenina and Bernard, travel to a “savage” reservation, they “rescue” a woman and her adult son, abandoned long ago, and return them to civilization. 1932.

By the Pricking of My Thumbs

A woman finds herself fascinated by the familiarity of a small house in a painting. A mystery ensues as she tries to find out more about it. 1968.

Exit, Pursued by a Bear

Title from The Winter’s Tale

At her last cheerleading camp, Hermione is drugged and raped. Unsure whether it was one of her teammates or a boy on another team, Hermione deals with the aftermath in her small Ontario town. For senior high and older readers. 2016.

The Fault in Our Stars

A miracle drug may have given sixteen-year-old cancer patient Hazel a few more years, but she is still depressed. Then Hazel meets cute Augustus during a support-group meeting and her world shifts in unexpected and inspiring ways. Some strong language. For senior high and older readers. 2012.

Tana Roberts has enjoyed a very secure childhood because her widowed mother has worked so hard to ensure happiness for her. But Tana’s happiness ends abruptly after high school graduation when the son of her mother’s lover rapes her. His drunken act changes the course of Tana’s life. Strong language and explicit descriptions of sex. Bestseller. 1984.

Title from Antony and Cleopatra

Harriet Vane attends the Oxford reunion known as the ‘Gaudy,’ but is soon upset by bizarre pranks, scrawled obscenities, burnt effigies, and poison-pen letters. She finds herself involved in a nightmare with few clues, and Lord Peter Wimsey offers both his customary help, as well as, his hand in marriage. 1936.

Title from Timon of Athens

The author coined the term “nonfiction novel” for this account of the murder of a Kansas family. He reconstructs the crime and the backgrounds and personalities of all the principals, drawing his information from observation, interviews, and official records. Violence and some strong language. 1965.

Infinite Jest, a movie so funny that people lose interest in everything else, was produced by Dr. Incandenza, who has one son at Enfield Tennis Academy and one at Ennet House, a home for recovering alcoholics and narcotics. The two institutions’ residents become involved with a Quebecois separatist who wants to distribute copies of the film. Strong language, some violence, and some descriptions of sex. Bestseller. 1996.

Members of a London acting troupe performing Shakespeare’s Macbeth suspect the play is cursed after several pranks disrupt rehearsals. Their apprehension turns to horror when an actor is murdered onstage during a performance. Scotland Yard Chief Superintendent Roderick Alleyn, who happens to be in the audience, investigates. 1982.

No Wind of Blame

In a small English town, Inspector Hemingway investigates the murder of a nasty little rich man who is shot through the heart. Ermyntrude, the dead man’s wife, is an overly merry widow. 1970.

Listening from within his mother Trudy’s womb, an unborn child learns about human behavior. He overhears how Trudy has left his father, John, and is now living with John’s brother, Claude, while the two plot John’s demise. Some violence, some strong language, and some descriptions of sex. 2016.

On Such a Full Sea

In a post-apocalyptic world, Fan lives in the settlement of B-Mor, where she works as a diver cultivating fish. One day her boyfriend Reg disappears, and Fan leaves B-Mor to discover his fate. 2014.

In the present day, Helen Young is trying to sell the last painting by famous pulp magazine illustrator Haskel. Flashback to 1940 San Francisco, where Haskel is part of a bohemian group of women who dabble in magic. Some strong language. 2017.

Title from The Winter’s Tale

San Francisco PI October “Toby” Daye, a half-human, half-fae changeling, is desperate to avoid magic. But when a curse forces her to investigate the murder of elven countess Evening Winterrose, Toby must return to the world of the fae–or die. Strong language, some violence, and some descriptions of sex. 2010.

Something Rotten: A Fresh Look at Roadkill

Wildlife researcher examines what happens to the many dead animals that we pass by daily. Showcases how others take the tragedy of roadkill and turn it into a scientific (and sometimes artistic) triumph. For grades 4-7. 2018.

Download Something Rotten: A Fresh Look at Roadkill, DB 93514

Download Something Rotten: A Fresh Look at Roadkill, BR 22527

Something Wicked This Way Comes

Will Halloway and Jim Nightshade, both thirteen, are fascinated by the carnival that comes to their small town. But after a series of frightening events, the boys realize there is something sinister about the show and its owner. 1962.

The Sound and the Fury

In 1928 Yoknapatawpha County, Mississippi, the Compson brothers–Quentin, Jason, and the “idiot” son Benjy–narrate events that trace the gradual disintegration of the family and include the ostracism of their wanton sister, Caddy. 1929.

In a world where people are implanted with technology to recode their DNA, gene-hacking genius Cat must decrypt her late father’s message concealing a vaccine for a horrifying plague that turns the sick into exploding zombies. For senior high and older readers. 2017.

This is Nathaniel Hawthorne’s first collection of short stories. It includes many of his best-known stories that incorporate scenes and themes from New England history and demonstrate the young Hawthorne’s mastery of the short story form. 1842.

Twenty-six-year-old Brady Neil–who had no criminal record, worked full time, and attended community college–is found brutally murdered. After Detective Peter Decker learns that Brady’s father was convicted of robbing and killing the owners of a local jewelry store years ago, he suspects the son’s murder may be connected. 2018.

Having moved to the small Maryland town of Willow Creek for the summer to help her sister recover from an accident, Emily gets roped into helping out at the Renaissance Faire. There she clashes with local school teacher Simon, who considers the Faire his family’s legacy. 2019.

Who Done It? Investigation of Murder Most Foul

Author investigates the murder of despised book editor Mr. Herman Q. Mildew. Each of the suspects–more than eighty fellow writers and illustrators–provides an alibi. But someone must have something to hide. For junior and senior high and older readers. 2013.

Download Who Done It? Investigation of Murder Most Foul, DB 76474

Lord Felmet orchestrates the murder of King Verence of Lancre and ascends the throne. Granny Weatherwax and her fellow witches, having come into possession of a royal youth, conspire to replace Felmet with the rightful–if reluctant–heir and lay Verence’s ghost to rest. 1980