Tips for traveling with Faye

Learn about traveling with Faye, a young woman who is deaf and has low vision. 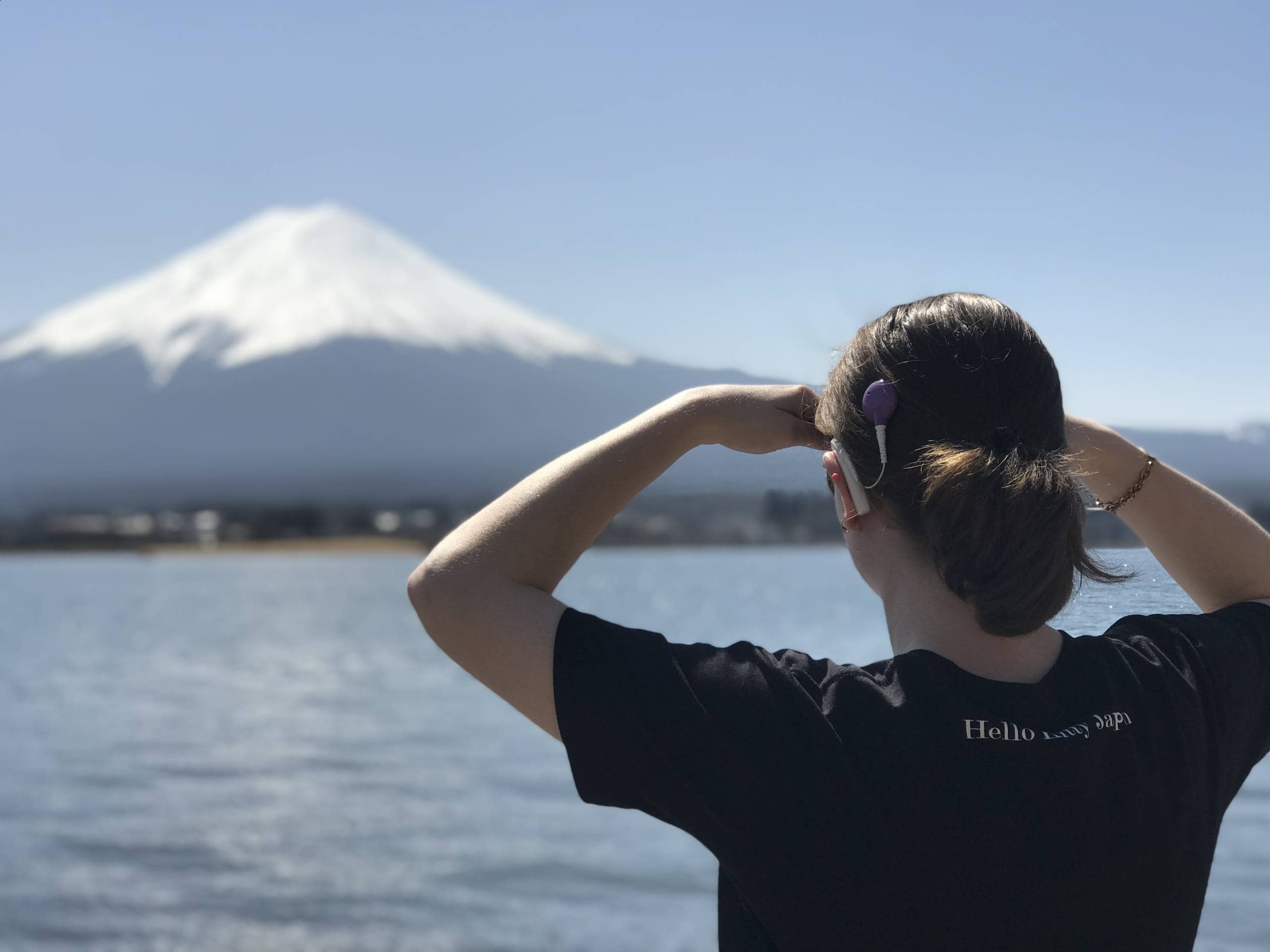 Hello! I am Faye and I’m deaf and have low vision. I use my cochlear implant to hear and a cane. I traveled to Japan alone back in 2018 for Spring Break while I was in college. It was one of my favorite vacations of all time besides Disney World. You may have asked, “Wow! How did you do that?!”. I’ll tell you my story of how I made a plan to travel alone in Japan and how I succeeded in it. Now, let’s start with how I planned the trip alone to Japan…

The number one thing you must do before you travel is research, research, and research! There are many stories you may have heard about how traveling internationally has gone wrong and this is what happens when you don’t research. You will be surprised by what you don’t know about the country you’re planning to visit and their requirements. For instance, I was searching for a flight with an overlay. I had the option of overlaying in China or Canada. I was considering overlaying in China since it’s cheaper. I did some research because I had an odd gut feeling about an overlay in China. I’m so glad I did! I found that the travel time is longer to overlay in China than it is in Canada. In addition, China requires foreigners to have a Visa regardless of whether you are in China airport just for overlay. Many travelers were unaware of it and were sent back to their home country instead of their final destination. So I chose the Canada overlay which costs more but it’s the best option and I don’t need a Visa card.

Another topic you would want to research is the culture of the country such as how to dress appropriately, what gestures are considered inappropriate, and the “unwritten” rules of their society. For instance, when you eat in a restaurant in Japan, don’t tip. It’s considered insulting if you tip the server. Instead, you will pay exactly the prices shown on the menu. Also, the hand gesture for “come here” is considered insulting in Japan. Instead, they do the gesture where your fingertips face the ground which would look like a “go away” gesture but in Japan, it’s a polite way of gesturing to “come here”. Lastly, some countries have laws associated with clothing and how we dress. The general rule of thumb is to wear clothing that covers your shoulders, is non-revealing, and is casual if you’re unsure of how to dress. Most of the world doesn’t wear gym gear and sweatpants in public.

The next topic to research is how safe the country or the city you’re planning to visit is. I visited Tokyo and the research showed me that it’s very safe. This is essential especially being a woman and a foreigner. For example, when researching Japan I found that they have train tubes and buses specifically for women which bans men from using them. This made me feel safer traveling alone.

The final topic to research is the budget. Find out how the general costs of traveling in that country such as food, souvenirs, essentials, public transportation, and museum admission fees. This research will help give you an idea of how much money to bring with you and make budget plans. I planned by how much money I had in hand divided by how many days I had left. The answer I get Is my budget limit for the day. I did this the first thing in the morning before I left the hostel.

Finding a place to stay

So now, you got the flight booked, done some research…so how about a place to sleep?

To find a place to stay in Tokyo, I looked into different options such as AirBnB, hotels, and hostels. But first, I researched to find the safest part of Tokyo to stay in which I found a hostel that is only for women. I stayed in Akihabara Bay Hostel. The hostel option was ideal for me since it was within my budget and it was very close to a train station and several cafes where I can stop by for breakfast. Plus, it was close to a convenience store that is open for 24 hours which was useful. I booked my capsule many months in advance because it gets full quickly. I highly recommend booking a place to stay in advance so you know for sure that you have a place to stay. In addition, most customs require you to have an address to write down where you will be staying so it’s a great idea to print out the address.

Now I am about to mention a famous deaf traveler, Joel Barish. I met him while I was traveling in Texas many years ago and because of him, he saved me the hassle of luggage claims I could’ve experienced. I asked him, “Wow! You traveled and you’re not home for a long time? What do you do with your clothes and your stuff?” Joel took his bag out and explained that he only packs mostly his clothes and a little bit of essential stuff if I remember correctly. He told me that he doesn’t do check-ins because he doesn’t have time to claim his luggage during overlay most of the time. I’m so glad I asked him because his response was helpful while traveling to Japan. I had a small gym bag with just my clothes enough for two days (the hostel had the washer and dryer set), voltage adaptors, phone and cochlear implant charger, OTC pain relievers (you will need this, trust me, especially the jet lag headaches!), a book, and a hairbrush. My gym bag was barely full to ensure that I have plenty of space for souvenirs. The hostels had everything else including toothbrushes, toothpaste, shampoo/conditioner, body lotion, face wash, and so much more. Amazing, isn’t it?! I am so glad I decided to do carry-on instead of doing the luggage claim because when I did the overlay in Toronto, Canada, I had two hours before I can get on the plane to Japan. The airport was enormous! I wish I could find a word that would describe something bigger than enormous. I’ve never seen an airport that big. I thought the airport was probably covering the whole country. By the time I found the plane to Japan, I only had 20 minutes left. I wouldn’t have had time to grab my luggage. I managed to get my flight in time because I got help from the security I bumped into. Another reason it took me a while during the overlay was that I went through customs. There was also a TSA line to go through.

How I enjoyed my trip to Japan

Before I traveled, I took a course, Japanese Sign Language for one semester in college, hoping I would meet deaf people in Japan. It’s a great idea to take a basic spoken/sign language course before travel. It will be useful. It was for me because I love making new friends. Also, I researched in advance to find places I want to see in Japan which helped me know what I want to do. Even though I traveled alone, I didn’t plan the trip all by myself. I had a friend who was from Japan in college which she was a student for at least one semester and then she moved back to Japan. I contacted her months before I traveled. She sent an SSP to pick me up from the airport and then my friend and I met. She has many friends to meet me and her friends ended up making plans for me. If you happen to know someone living in this country you’re traveling to, connect with them. I highly recommend this because they know the place better than you. Even better than your research. Trust me!

One thing you should consider is a WiFi pocket. It’s just like the WiFi box you have at your home but it’s small and you can fit it in your pocket. You can rent it in the country and return it on your last day. It was a huge lifesaver because I used it for GPS on my phone and to communicate with my friends in the middle of the city when we were trying to meet.

The next tip, which is extremely important, have a backup passport by making a copy and print it the paper, and knowing where your country’s ambassador is. Print out the address and attach it to your backup passport. The best place to put it in your pocket. If you lose your passport and have your backup ready, it will make it easier for the ambassador to help you. Regardless of how safe a country is, anything can happen. Lastly, always bring your passport with you. Not only to prevent it from being stolen at the hotel but also you will be surprised how often you will be asked for the passport for identification purposes and also to remove the tax charges when you make a purchase in a store. Yes, even the cashier at the souvenir shops asked me for my passport so they can take out the tax.

Supporting your child with disabilities at home

Summer camp information for families of children with disabilities