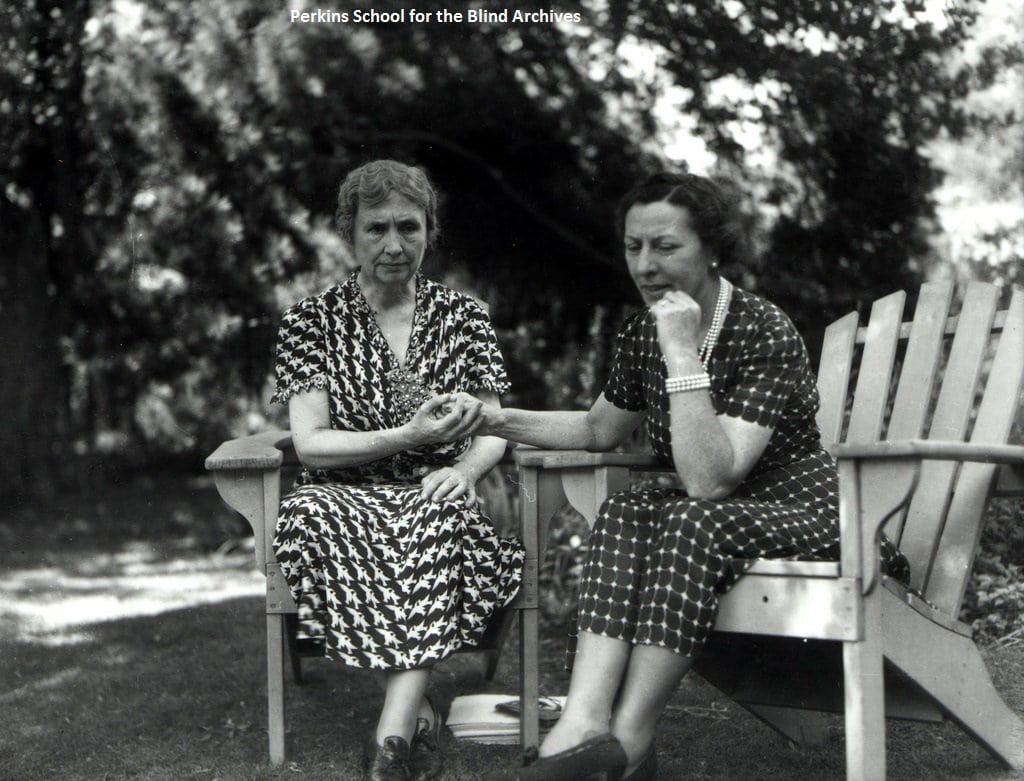 Polly Thomson’s hairdresser told her that another client of hers was looking for someone to travel about the country with her and “Miss Keller” on a lecture tour. Thomson was interested in the position, she loved to travel, but had never heard of Miss Keller or the hairdresser’s other client, Anne Sullivan Macy. Soon after, Thomson met with Keller and Sullivan at the New England Conservatory of Music to interview. Sullivan was impressed by Thomson’s “clear, deliberate, cultivated” voice and “attractive personality, good health,…and great willingness.” On October 20, 1914, Thomson joined the household as secretary, eventually becoming Keller’s companion and interpreter following Sullivan’s death in 1936.

Mary Agnes (Polly) Thomson was born in Glasgow, Scotland on February 20, 1885. In 1913, Thomson came to the United States for a long visit to an uncle who worked as a shoe manufacturer in Swampscott, Massachusetts.

Nella Braddy Henney was close friends with Thomson, Keller, and Sullivan, often referring to them as The Three Musketeers. She collected notes for a never-finished or published biography of Polly Thomson. Henney’s notes do a great service in introducing us to Thomson, a relatively unknown but vitally important figure in Keller’s adult life. In fact, Thomson spent 46 years with Keller, just 3 fewer than Sullivan’s tenure with Keller.

Sullivan made it clear that she wanted Thomson and Keller to stay together after her death. She said that “they need each other.” Henney wrote that Thomson “might be called Mrs. Macy’s second pupil” as she taught her not only the manual alphabet, but also how to care for Keller. Thomson was “eager to learn and learned a lot.” She quickly became a fast enough speller to keep up with Keller’s expectations. She did not, however, use shortcuts. She explained that “If Teacher had, I would. I do it the way Teacher did.”

Thomson’s early years in the household with Keller and Sullivan were not always easy. Henney explained that Thomson often felt lonely as she was not “welded into the unity that was formed of Helen Keller and Anne Sullivan.” Nonetheless, she was devoted to both women. “Her devotion to ‘Teacher’ no less than her devotion to Helen,” wrote Henney in her notes. As Sullivan got older, Thomson began to take on more roles in Keller’s life. Thomson loved to travel with Keller and enjoyed meeting famous people and luminaries while working with Keller. She had, according to Henney, a “deep respect for Helen’s knowledge” and devoted all aspects of her life to Keller. Henney noted her “single-minded dedication.”

Thomson’s strong personality and protectiveness of Keller frustrated some. Henney summarized that “[Friends] meant more to her than anything else except Helen, but that was a large ‘except’ no friend was ever so close as to be sacrificed by Polly for Helen’s sake or by Helen for her work’s sake.” The two women filled their days with work, especially responding to endless correspondence that Thomson would read to Keller. Henney commented that Thomson could become resentful of other people spelling to Keller in public. Thomson wanted to know “exactly what goes on.” As Keller’s secretary, Thomson was responsible for weeding through and handling all the requests made of Keller. The household, Henney explained, had to be “on guard against too great intimacy” in order to avoid being used “for the great glory of the user.” Of course, refusals sometimes left people with bad feelings toward Thomson.

Despite a lonely beginning for Thomson, she and Keller formed a tremendous bond. They traveled together all over the world and spent countless hours at home responding to correspondence. The pair also, however, settled into a mostly quiet life. They were happy to escape to their respective rooms after dinner to spend the night reading their books.

Thomson “liked dignity and formality” she “cared deeply what the public thought and remembered that posterity was on the way.” Perhaps with this posterity in mind, Thomson frequently wrote letters to Henney. These letters are not only evidence of their own friendship, but also provide a record of just what Thomson and Keller were doing at the time — where they were in the world, who they had dinner with and their thoughts on current events.

You can see more pictures of Thomson with Keller, Henney, and other friends in our Helen Keller Digital Collections. Images and transcriptions of some of her correspondence is also available in the Nella Braddy Henney Collection.