The Legacy of Ken Stuckey 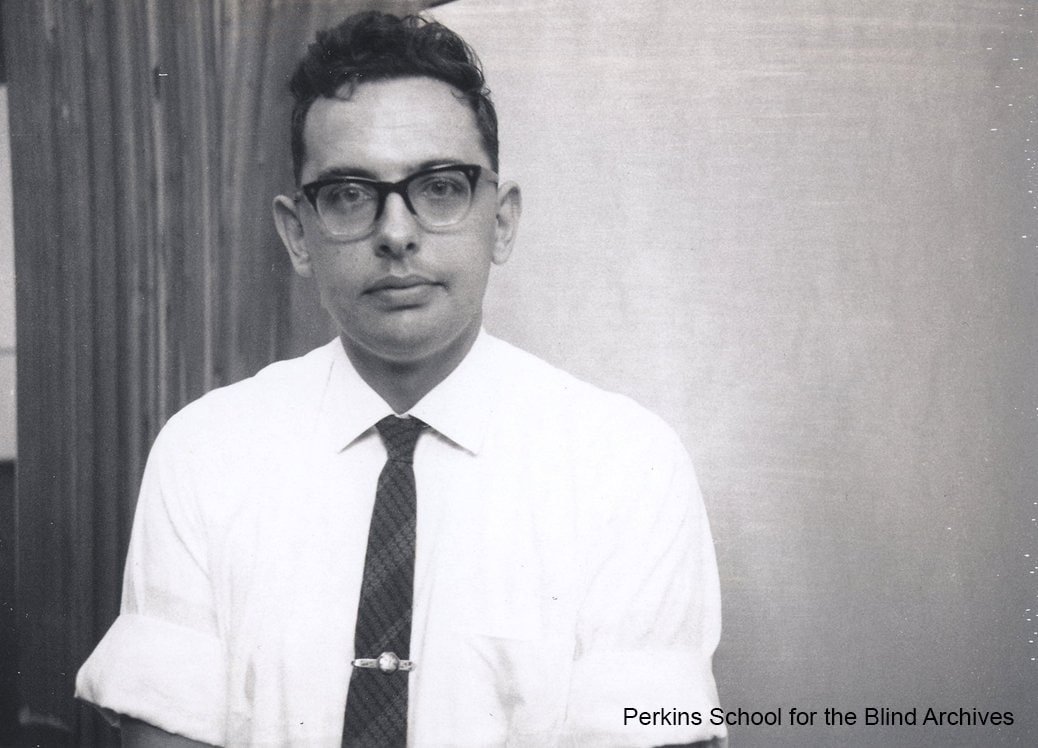 Kenneth Albert Stuckey (1938-2020) came to Perkins as an assistant librarian in 1965. He had come from Norwood, England. Known as Ken, he spent the next 38 years at Perkins, mainly in the role of Research Librarian. His contributions in this role were far-reaching but could almost be overshadowed by his many other contributions to Perkins and its community. By the time he retired in 1998 Stucky’s legacy also included his curatorship of Perkins Tactile Museum and Museum exhibits, his stewardship of the Perkins historical collections and commitment to promoting that history, his leadership of the Perkins Boy Scout Troop, and his many contributions in books and publications on a wide range of topics.

Ken Stuckey started his career at Perkins, as Assistant Librarian and Assistant Housemaster in Tompkins Cottage. In1966 a new Library and building was created to house the “historic collection of works on the education of the blind and deaf-blind,” then referred to as the Perkins Blindiana Library (Diamond, 7). In 1969 Stuckey became the Research Librarian for the Samuel P. Hayes Research Library, formerly the Blindiana Library. As head of the Research Library, Stuckey oversaw a collection that was, and still is, considered the largest on the non-medical aspects of blindness and deafblindness. “I feel that I have a great responsibility: not only to maintain this wonderful collection but to see to it that it is kept as up to date as possible” (“Library Services,” 20). This library, used by the staff and historical researchers, was and still is, an important resource to graduate students training to be teachers of students with blindness and deafblindness. “The graduate students I help today will be the educators of tomorrow” Stuckey noted in the 1988 Perkins Annual Report (“Library Services,” 20). 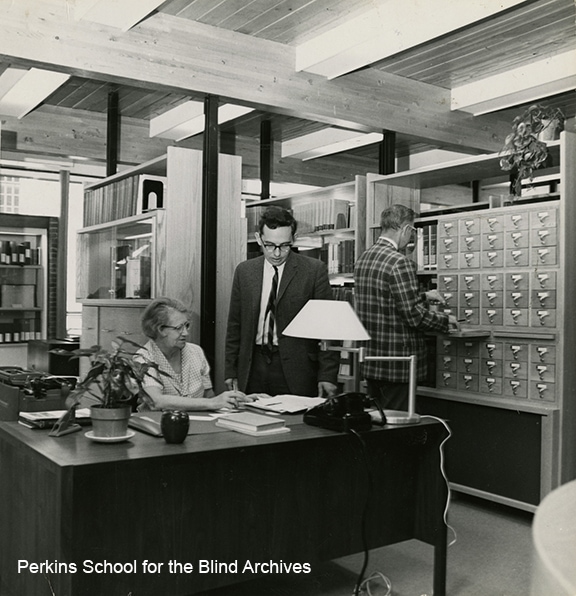 Image Description: Kenneth Stuckey standing and Florence J. Worth seated at a desk, are having a discussion while looking at the paperwork on the desk. There is a man next to them, in a plaid blazer looking through the card catalog.“

As librarian of the Hayes Research Library collection, Stuckey also stewarded Perkins’ vast and unique historical collections. The scope of the collection goes well beyond the history of the school, documenting the evolution of the fields of knowledge associated with blindness and deafblindness, as well as the gradual inclusion of people with visual impairments into the mainstream of American life. These collections make up the bulk of the Perkins Archives today. During his tenure, Stuckey provided access to researchers that include Pulitzer Prize-winning author Joseph Lash and playwright William Gibson, author of The Miracle Worker (The Library, 14). Ken Stuckey also created historical exhibits and wrote, spoke, and ran activities designed to educate staff, students, and the public about Perkins History. The year of Perkins Sesquicentennial, Stuckey served as its Chairman (“Perkins Students,” 15). He also took a group of Perkins Students to Greece, where the first two Perkins Directors had ties, (“Scouts Visit,” 12,) and was involved with a project to create and bury a time capsule to unburied in the year 2029 (“Perkins Students Bury,” 13).

As Curator of Perkins’ Tactile Museum, Stuckey acquired through loan, donation, or purchase a wide variety of tactile objects students could learn from. He also served as head of the Museum Committee. As part of this committee, exhibits of the Month were prepared that displayed items on a given topic and were introduced by a “bulletin.” Exhibits ranged in topic. Past exhibits included the personal effects of Perkins founding director Samuel Gridley Howe and a model of a polar bear recently donated by the Boston Children’s Museum (“Museum Exhibits,” 22). The titles were often light-hearted. “All dressed Up and No Where to Go” featured a taxidermy magellanic penguin (“Museum Exhibits,” 22). Not all collections came from the historic or ICM collections at Perkins. In 1975 loans for exhibits came from the National Aeronautics and Space Administration and the New England Telephone Company (“Exhibits,” p.2). “Apples: Nature’s Toothbrush” featured apple tasting (“Students Learn”, 20) and “How the Lobster got into Thanksgiving,” featured live crayfish (“Exhibits,” 2).

In 1979 Boy Scout Explorer Troop 225, chartered at Perkins, celebrated its 50th Anniversary (“Scouts Celebrate,” 15). Stuckey, Scoutmaster of the Troop starting in the 1970s celebrated the event with awards and games and special guests “(Scouts Celebrate,” 15). The Explorers participated in traditional activities and events, but their excursions are especially notable. In the Fall 1989 issue of The Lantern, titled, “That Why We Call Them Explorers,” the troop and “their fearless leader” found themselves llama trekking through the Maine woods, on a sugar farm in New Hampshire, and at an adventure camp in the Adirondacks (That’s Why, 21).  The troop and Stuckey were featured in the Fall 1988 issue of Scouting magazine. In the story about the troop, which was also published in The Lantern, their experiences rock climbing, caving, white water rafting, and hot air ballooning were mentioned (Moise, 4). In this Article, Stuckey explains that their members, “go through a two-step routine. Step one is, ‘I could never do that.’ And step two is, ‘Hey, I did it!’ (Moise, 7). 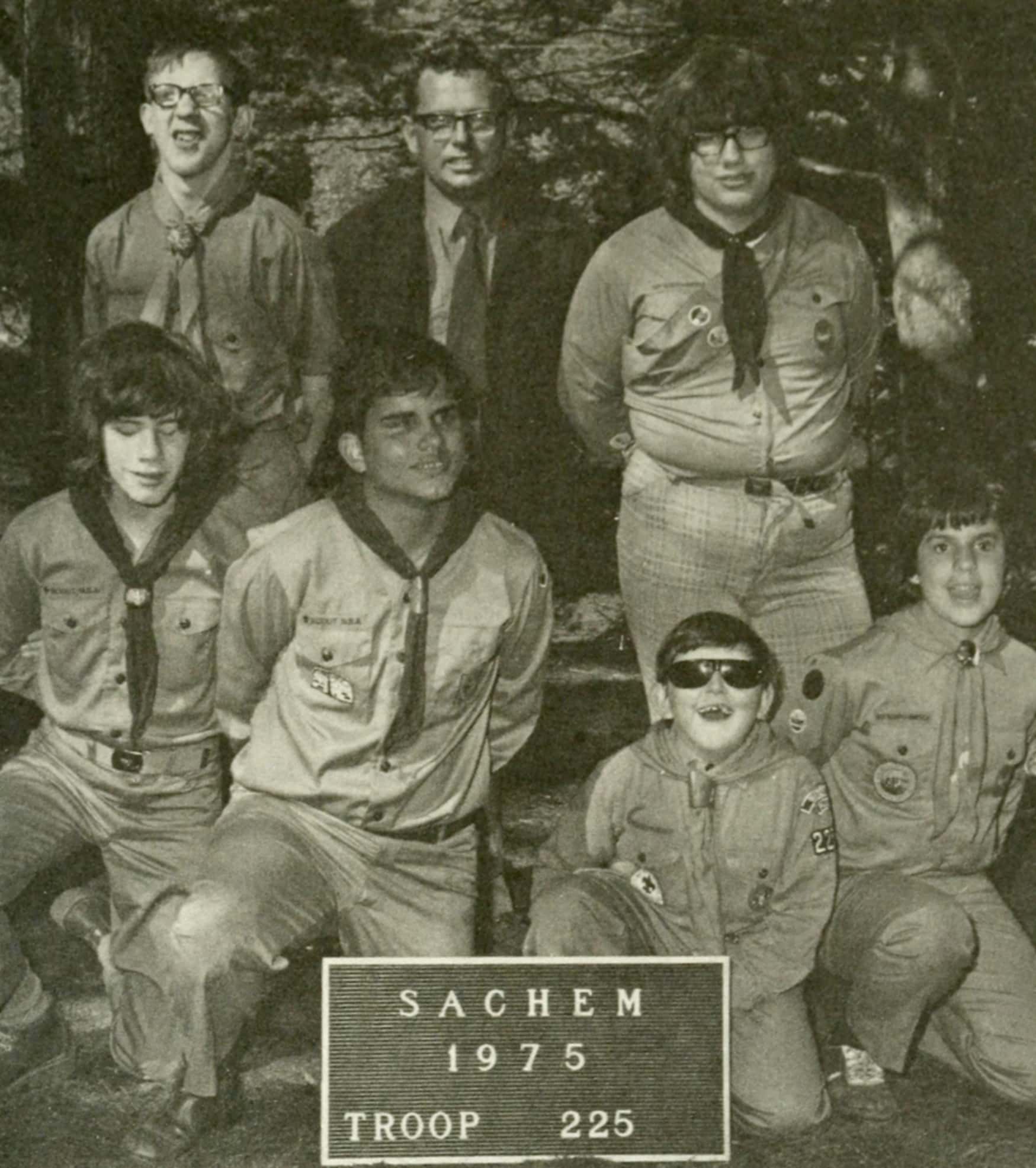 During his time at Perkins, Stuckey also collected resources for bibliographies and wrote books and publications related to Perkins history, alumnae, blindness in culture and the history of blind education. From collections about blindness in stamps and cartoons, to bibliographies celebrating the lives of people with blindness or resources related to deafblindness, his scope was as wide as his many contributions to Perkins.

Thanks to his stewardship of Perkins’ many unique library collections Stuckey left a tangible legacy as Research Librarian that touched countless future educators, staff, and researchers.  His dedication to the students through activities such as the Scouts, exhibits, and excursions showed his commitment to the Perkins mission. It was this legacy of providing access to students in adventurous and creative ways that continues to promote inclusion and possibility to both students and the general public.

“Staff Photographs and Educators of the Blind” Perkins School for the Blind Archives Digital Collections, Flickr.

Tour of Perkins campus. Perkins School for the Blind, 1998. MP4

Stuckey, Kenneth A, Gunilla Stenberg, and Helion M. Oliverira. Education of the Blind Is World Wide: Stamps Which Honor and Aid the Blind. Watertown, Mass. Perkins School for the Blind, 1992.

Stuckey, Kenneth A. Is Blindness a Laughing Matter?: A Collection of Cartoons Related to Blindness and Visual Impairment. Watertown, MA: Perkins School for the Blind, 1995.

Wilson, James, and Kenneth A. Stuckey. Biography of the Blind: Including the Lives of All Who Have Distinguished Themselves As Poets, Philosophers, Artists, &c., &c. Louisville, Ky: American Printing House for the Blind, 1997.

Diamond, Isabella S. “Remarks by Isabella Stevenson Diamond on the Occasion of the Dedication of the New Blindinan Library.” The Lantern, December 1966, pp. 3-13. Internet Archive.

“Library Services.” The Lantern, One Hundred and Fifty-Second Annual Report of Perkins School for the Blind, 1983, p. 20. Internet Archive.

First embossed book for the blind