Shining light on the leading cause of visual impairment

Our experts are teaching the world about cortical/cerebral visual impairment to help children improve their use of vision. 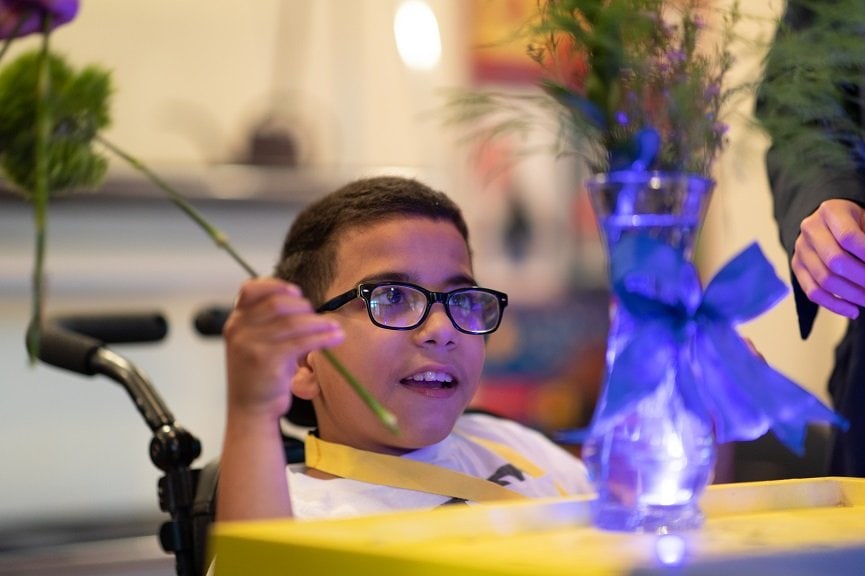 This story appears in the Fall 2018 issue of In Focus.

There’s been a significant shift in the field of visual impairment in recent years with a single disorder emerging as the new leading cause of blindness among children in the U.S.

CVI, short for cortical/cerebral visual impairment, is caused by damage to the visual pathways or processing centers in the brain. The disorder is still widely misunderstood, however, due to a lack of diagnostic tools in the medical field and the pervasive view among educators that visual impairment is strictly an ocular issue. As a result, a growing number of children who have this hidden disability are going undiagnosed.

Perkins School for the Blind is leading the charge to correct course and, in turn, is helping affected children learn to use their vision.

“As we work with kids on campus, we’re getting a stronger handle on best practices to share with the wider community,” said Ellen Mazel, CVI Project Manager at Perkins. “At the same time, we’re helping students improve their vision. That’s the greatest gift.”

Perkins is well ahead of the curve in the classroom, building individual education plans for children with CVI and sharing strategies with public school districts. These educational blueprints are uniquely designed to promote visual improvement. For some, that means making use of color or movement to support visual attention, while for others with acquired brain injury, it means tapping into pre-existing visual memory.

Perkins strongly believes in the power of cross-sector collaboration as a means to help move the CVI field forward. Partnerships have been established with such leaders as Massachusetts General and the New England Eye Clinic, Boston Children’s Hospital and Brigham and Women’s Hospital.

“There’s progress being made because the dialogue is happening now,” said Dr. Lotfi Merabet, a neuroscientist who has partnered with Perkins in its CVI research. “Perkins has decided to be the backyard for this conversation, where parents, clinicians, researchers and educators come together.”

Advancing this understanding is ultimately so important because affected children can, in fact, learn to use their vision to varying degrees. But only through increased understanding can it be determined what’s possible, according to Mazel.

“My hope is everyone builds an understanding of CVI so every kid has the possibility of improvement in vision,” she said. “From there, you just wonder where that will go.”

A history of action

Perkins has a long history of addressing public health issues like CVI well before the general populace. When the rubella epidemic swept the U.S. in the 1960s, for instance, our experts anticipated the demands of the thousands of babies who were born blind and deafblind as a result, adding classrooms, residences and evaluation suites. That added capacity proved invaluable: Perkins’ deafblind population grew tenfold in the years after the rubella outbreak, from 8 students in 1953 to 81 in 1976.

Meet Emmett, a child with CVI

Five things to know about CVI