Samuel Gridley Howe (1801-1876) served as the founding director of what would become Perkins School for the Blind. 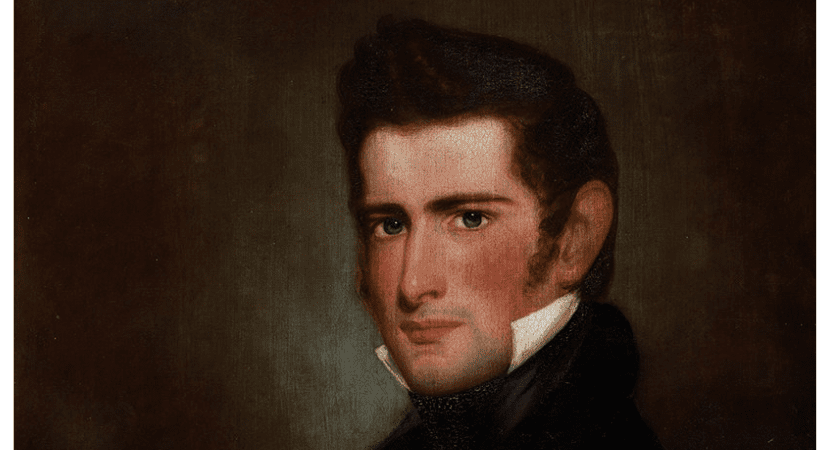 A study in contrasts, John Dix Fisher and Samuel Gridley Howe had studied together at Brown University and at Harvard Medical School. Fisher was soft-spoken and studious; Howe was a handsome extrovert who rode an exquisite black stallion on the city streets of Boston. While Fisher studied in Europe, Howe joined the freedom fighters in Greece. Fisher had a vision of making Boston a more compassionate city; Howe was seeking a way to make his mark on the world. Together these men began a venture that changed the lives of countless people who were blind.

Samuel Gridley Howe was born on November 10, 1801, in Boston, Massachusetts to Joseph N. Howe and Martha Gridley Howe. He graduated from Brown University in 1821 and went on to Harvard Medical School to continue his studies. After graduating in 1824, he traveled to Greece to serve as a soldier and surgeon in the Greek Revolution. He served there until 1827.

A school for students who are blind

While Howe was in Greece, one of his classmates from Brown, John Dix Fisher, founded the New England Asylum for the Blind. In 1831, his friendship with Fisher, with whom he expressed his interest in the school, landed him the position of founding director – a position he would dedicate his life to. Inspired, but without a model in the United States, Howe set off, in the autumn of 1831, to visit schools in Europe to study their techniques. He later said he “found in all much to admire and to copy, but much also to avoid.” Nearly all European schools fell into one of two camps: some emphasized industrial education, while others taught academic skills exclusively. Howe realized the necessity of integrating these approaches and teaching the whole child. The Perkins approach to education would give students both the ability to think and the skills to support themselves with the goal of turning out independent, productive, well-educated members of society.

At the time, knowledge about how to teach students who were blind came from schools in France, England, Scotland, and Prussia. Howe reached out to Edward Everett, a highly respected politician, Unitarian minister, and later diplomat from Massachusetts who had significant connections to European authorities. Everett arranged invitations for Howe to visit institutions for the blind across Europe.

During this time, Howe was also busy with other social considerations, including conversations and meetings with a group of Polish revolutionaries, an interest that likely began in May of 1831. The American Polish Committee, supporting a rebellion that began in November 1830 against Russia, entrusted Howe with funds to deliver to the committee members in Paris for use in Poland.

In February, Howe traveled to visit schools in Belgium and Prussia, as well as bringing funds to Polish revolutionaries. At first there were few problems, but he was arrested in Berlin on March 4th for bringing funds to Polish revolutionaries. He remained in solitary confinement in a Prussian prison for nearly four weeks. There was no American delegation in Berlin, but when Howe missed an expected meeting, a young American named Albert Brisbane was able to alert the U.S. Minister to France, William C. Rives. Between pressure from newspapers, notable Americans, and Rives, Howe was released but forbidden ever to return to Prussia.

Howe returned in the summer of 1832 with many ideas and two teachers, one from Edinburgh and another from Paris. He selected seven students and opened his school in several rooms in his father’s house. With few teaching materials and only three raised print books from England, he soon began devising his own materials. Within a few months his students were making remarkable progress, but the school was in debt. Realizing the need for publicity, Howe set aside his misgivings about making a show of his pupils’ skills and organized a demonstration before the Massachusetts legislature, which allocated money for the school. With funding, the institution grew rapidly and soon required new quarters.

In the year before Perkins opened its doors to students, in the autumn of 1832, Samuel Gridley Howe scoured North America and Europe for tactile books for his students. Unable to find enough books to create the small library he desired, Howe took matters into his own hands.

In 1835, Howe developed his own embossed alphabet called Boston Line Type. The new tactile writing system was compact and had few confusing flourishes, unlike popular systems in use at the time. His design took up less space on a page and was subsequently more economical to print. Next, he hired a printer, Stephen Preston Ruggles, to design a press that could produce books in Boston Line Type. In 1835, Howe printed his first Boston Line Type book called Acts of the Apostles, which was soon followed by The Blind Child’s Book, a reading textbook compiled by Howe. The books were printed not only for his students but for students and adults around the country who were in great need of books they could read themselves.

Understanding the necessity of keeping the funding for the school and printing venture separate, Howe began soliciting donations to subsidize the cost of publishing textbooks for students who were blind.  Howe traveled to Washington, D.C. to advocate before Congress for the establishment of a national lending library service for readers who were blind. In the following decades, he tried to gain support for a nationally-funded library from educators and administrators but was ultimately unsuccessful. Howe’s dream, however, was finally fulfilled nearly 100 years later by the establishment of the National Library Service for the Blind and Physically Handicapped in 1931.

Howe’s advocacy on behalf of those with disabilities continued throughout his lifetime. During his first years as director, he visited 15 states, getting school’s started in Ohio, Tennessee, Kentucky, and Virginia. Howe also helped start a school for children with intellectual disabilities in 1848 and a school for the deaf in 1867. At Perkins, Howe’s curriculum emphasized self-sufficiency, physical activity, and skills that would result in jobs for his students as adults. Howe believed that his students could be productive members of society and should be allowed to do so. He was also interested in the possibility of education for those unable to hear or see.

Five years after the Perkins School for the Blind opened its doors, Howe heard about Laura Bridgman, a young girl who had lost her sense of sight, hearing, smell, and nearly all of her sense of taste after a bout with scarlet fever. At the time, people who were deafblind were considered hopelessly unreachable. Howe, however, was eager to try to educate her.  Howe traveled to Hanover, New Hampshire, and easily convinced her busy family that Laura Bridgman’s best chance lay in going to Perkins School for the Blind. She arrived at the school in October of 1837, 11 weeks before her eighth birthday. Howe published the account of Bridgman’s education in the Perkins Annual Reports, making both teacher and student internationally famous. Howe repeated his methods with other students who were deafblind — Lucy Reed, Oliver Caswell, and Almira Alden. His success in teaching these students ultimately led to the education of Helen Keller.

His causes also extended to abolitionism. In 1846, Howe entered the antislavery movement for the first time as a Congressional candidate. He was not elected but continued his abolitionist work for the rest of his life. Howe was one of the supporters of John Brown, who was the leader of the Harpers Ferry Rebellion in 1859. During the Civil War, Howe worked for the US Sanitary Commission in Washington promoting hygiene, in an effort to make hospitals and soldiers safer. Because of this work and his work towards emancipation, in 1863, he was one of three men appointed by the Secretary of War to the American Freedmen’s Inquiry Commission. He was charged with investigating conditions of freedmen in the South since the Emancipation Proclamation and with aiding their transition to freedom. His abolitionist work led to many acquaintances and friendships with well-known Bostonians including Charles Sumner, William Lloyd Garrison, Edward Everett, Oliver Wendell Holmes, and others.

Howe married Julia Ward in 1843 and the couple had six children. Julia Ward Howe is known for her work as a social activist, especially for women’s suffrage. She was a writer and lecturer who is best known today for writing “The Battle Hymn of the Republic” and the original Mother’s Day Proclamation in 1870. Like her husband, Julia was an abolitionist.

After serving as the school’s director for over 40 years, Samuel Gridley Howe died on January 9, 1876 at the age of 74. He left behind a legacy of work aimed at reform and social change, whose influence is still felt today. After his death, Michael Anagnos, Howe’s son-in-law, assumed the role of Perkins’ second director. Anagnos also assigned the name Howe Memorial Press to the printing fund, created in 1880. A large printing of the memoir of Dr. Howe in Boston Line Type was announced the following year. His legacy of service was also recognized in 1944, when a Liberty Ship was named the “SS Samuel G. Howe” in his honor. Today, Perkins’ most recognized building on campus bears his name.