Claude Ellis ran a number of road races, including the Boston Marathon, alongside Perkins students. 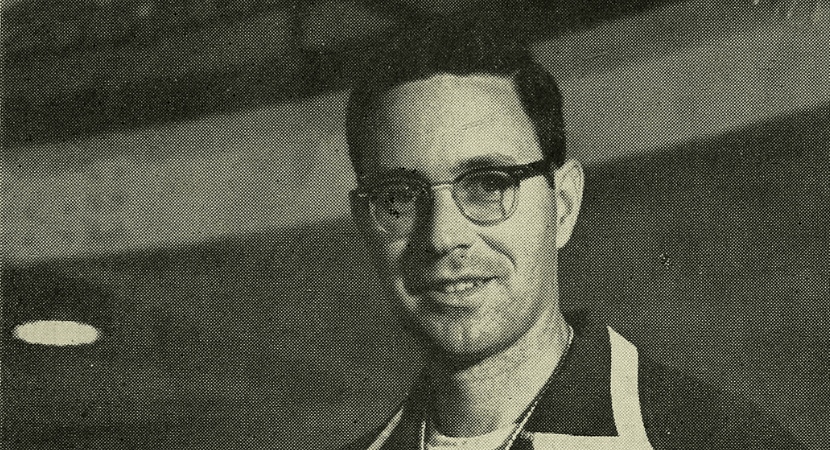 During his 40-year career at Perkins, Claude Ellis served as Physical Education Department and Athletic Director, Assistant Principal, Principal and more. He was well-known and noted for having an “excellent” relationship with both students and staff in the 1977 Annual Report. Given his variety of roles, Ellis was involved in almost every part of the school during his career. Notably, though, he remained the head of the Physical Education Department even when he was named Assistant Principal. Ellis believed that physical education was a crucial part of the curriculum for students who were blind and visually impaired as it increased their independence and confidence.

An avid runner himself, Ellis hoped to inspire a love of running in his students. He described a system he arranged in a 2001 interview: “…I paired a blind boy with a partially sighted one of comparable ability. They would hook arms and run together” (Snodgrass, 93). In a 1988 News Tribune article about his interest and participation in the Boston Marathon, he said that “Running means a lot to the marathon racers, but it also means a lot to the kids here at the school who take part. I’m glad I can be part of both.” Indeed, Ellis ran a number of road races, including the Boston Marathon, alongside Perkins students.

In 1965, Richard Chapman ran the Fifth Annual Road Race from Lexington to Cambridge in observance of Greek Independence Day. The June 1965 Lantern reported that “Holding on to the elbow of Mr. Claude Ellis… Dick finished forty-third out of eighty starters.” That year, Ellis finished 110th out of 440 starters in the Boston Marathon, while “knocking about six minutes off his best previous time.”

Then, in 1970, Ellis was joined in the Boston Marathon by Francis Maher (a teacher in the Department for Deaf-Blind Children) and Perkins senior, Brian Smith. All three completed the course, which as the June 1970 Lantern affirms “in itself is considered a considerable accomplishment.”

Returning to running with students in 1978, Ellis ran the Charles River Run road race with Bill Momtsios, a piano tuning student from Greece. Momstsios came in first in the Handicapped Division of the seven mile course with Ellis serving as his running guide.

The following year, Ellis and Momtsios hit the road again in an annual 9.3 mile road race. With Ellis as his running guide, the pair finished 163rd (and 162nd, although their times were identical), well into the first half of the 383 runners who finished the race.

Ellis was asked to participate in the Second World Masters Track and Field Tournament in Gothenberg, Sweden in August 1977. He ran in the 10,000 meters race on a track. At the time, Ellis was a member of the North Medford Club, the largest running club in New England (at the time) and had served on the Club’s board of directors for ten years, including time as the President and Vice President. A note in the Lantern in December 1977 offers some statistics about Ellis’ running career to date: “he has participated in 400 road races and 17 marathons!” That year, he completed a 5 mile road race in Cambridge in just over 32 minutes.

At Perkins, Ellis coached track and wrestling as he innovated adaptive technology and methods to allow students with visual impairments to participate in sports such as baseball, running, and bowling. A testament to his work, Ellis was honored by the New England Association of the American Athletic Union in 1980 for his “loyal service and sincere efforts to advance amateur sports in New England.”

“Three Perkins Runners in the Marathon.” The Lantern, Vol. XXXIX, No. 3. Perkins School for the Blind, Watertown MA. June 1970.

“Mr. Ellis in the European Tournament.” The Lantern, Vol. XLVII, No. 1. Perkins School for the Blind, Watertown MA. December 1977.

Snodgrass, Marjorie Lagemann. Echoes in Retrospect: An oral history of remembered days at Perkins School for the Blind by students and staff who were there from 1950-1970.” 2001.