Have you ever been told you cannot do something, just because you are visually impaired? YOU BELONG.

Last year, I found myself having a conversation with someone who was not knowledgeable about people with disabilities. They were shocked that I was in college, because I have low vision, and kept asking me why I “took the opportunity away from a sighted person to attend this college.” I was in a bit of shock, and explained that I had attended public school just like them, I took classes in the general education system, and applied to college just like the rest of my friends. I even pointed out that I was in the engineering department at my college, something that I don’t often mention to people I have just met. They didn’t seem to care and kept insisting I was robbing others of educational opportunities. I dropped the topic and walked away.

Earlier today, my friend had a near identical conversation with someone who claimed that students with disabilities shouldn’t even go to public school, let alone go to college, because it would be impossible for them to accomplish anything. My friend came to me depressed, as they had taken the words of a complete stranger to heart. I don’t know the exact circumstances leading up to this conversation, but I want to remind anyone who has ever felt discouraged after these types of conversations of these two words:

You are a person with a disability, not a disabled person. After all, you are human, and the disability is something you have, not who you are. It is not a good thing or a bad thing, rather just a component of the person you are.

You can attend public school and receive accommodations thanks to the Individuals with Disabilities Education Act (IDEA), something that has been around for over forty years. It lets you be in the least restrictive environment for your learning, meaning that you have the right to be in the classroom if that’s where you function best. And you also have the right to receive services that help you learn, such as large print, Braille, extra time on tests, and so much more.

You can go to college thanks to the Rehabilitation Act of 1973, Section 504, which prevents discrimination based on disability. Your college helps you succeed by giving you a disability services file, and you are held to the same standards as other students. You are not stealing opportunities from other students because you have a disability, because chances are, your disability was not something you listed in your college application, so it wasn’t something you were judged on.

You can go anywhere. The Americans with Disabilities Act of 1990 grants accessible transportation and buildings, as well as many other things. Title II also grants workplace and postsecondary disability accommodations. I joke that the only jobs I can’t hold are taxi driver and brain surgeon, but thanks to this law, I can be a software engineer or work in an assistive technology lab, or whatever else I want.

Things may seem a bit scary right now, and it’s okay to admit that. But don’t think for a moment that people with disabilities don’t belong in the world we live in. Albert Einstein had dyslexia and became one of the most brilliant minds of our generation. Stephen Hawking uses a communication device to deliver mindblowing theories about the world around us. Stevie Wonder and Ray Charles didn’t let blindness stop them from creating music. And of course, there are people like Helen Keller, Christopher Reeve, Edward Roberts, and so many more that helped to advocate for people like them who lived with disabilities. Without these people, our world wouldn’t be the same.

So remember this when someone tells you that people with disabilities should be anywhere but where you are right now: 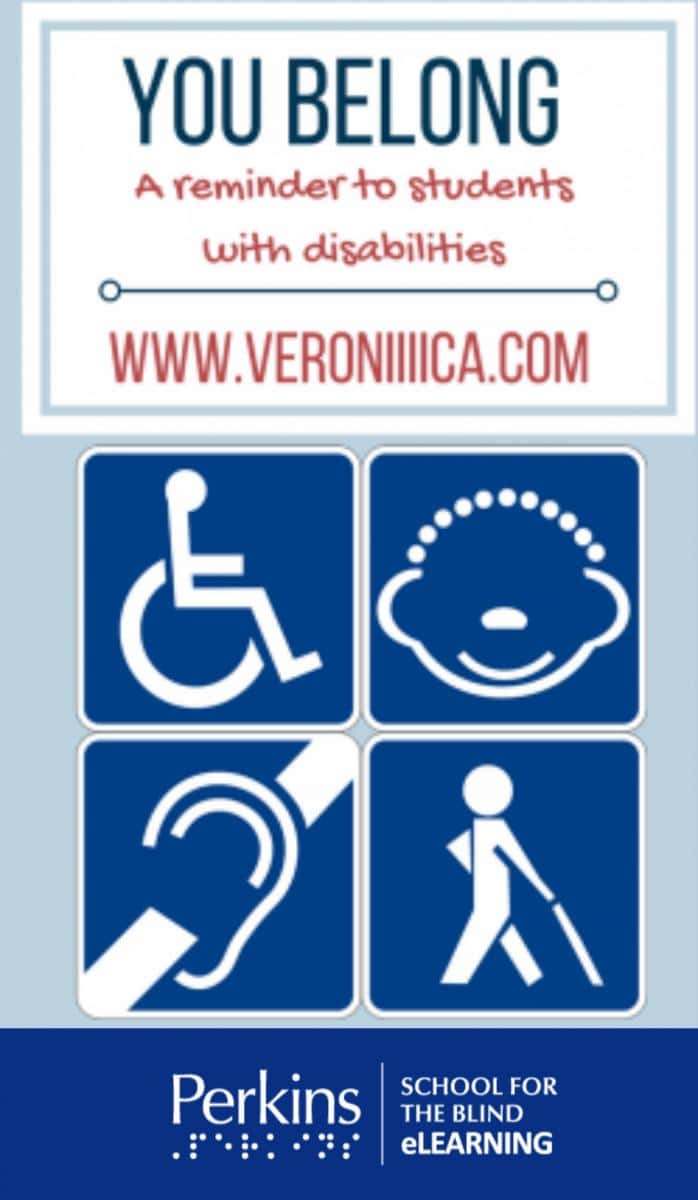