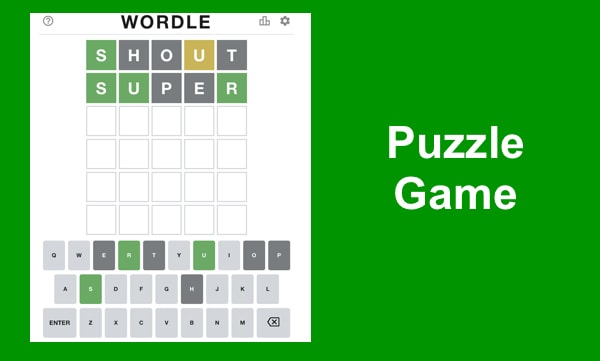 Use your logical thinking skills to win!

Wordle is a free online puzzle game where players try to guess a valid five-letter word in six tries or less. Wordle can be played on a computer or mobile device. As an educator, I love how Wordle builds vocabulary and requires logical thinking!

Wordle appears as a 6×5 grid. The player types a random five letter word which appears in the first row. After each guess, the color of the tiles will change to show how close your guess was to the correct word. The colors indicate if you picked the right letters and if those letters are in the right position. If the correct letter is in the right spot, it’s tile turns green. If the correct letter is in the wrong position, it’s tile turns yellow. If the letter is not in the word, that letter tile stays grey.

Image 1: Screenshot of an iPad on the Wordle website. The word “SHOUT” is in the first row. The “S” tile is green and the “U” tile is yellow. The other letter tiles remain grey. The word “Super” is in the second row. The “S”, “U” and “R” are green the other two tiles remain grey. Below the Wordle grid is a qwerty keyboard. The keyboard letter tiles are also color coordinated and letters that have been chosen but are incorrect are dark grey. 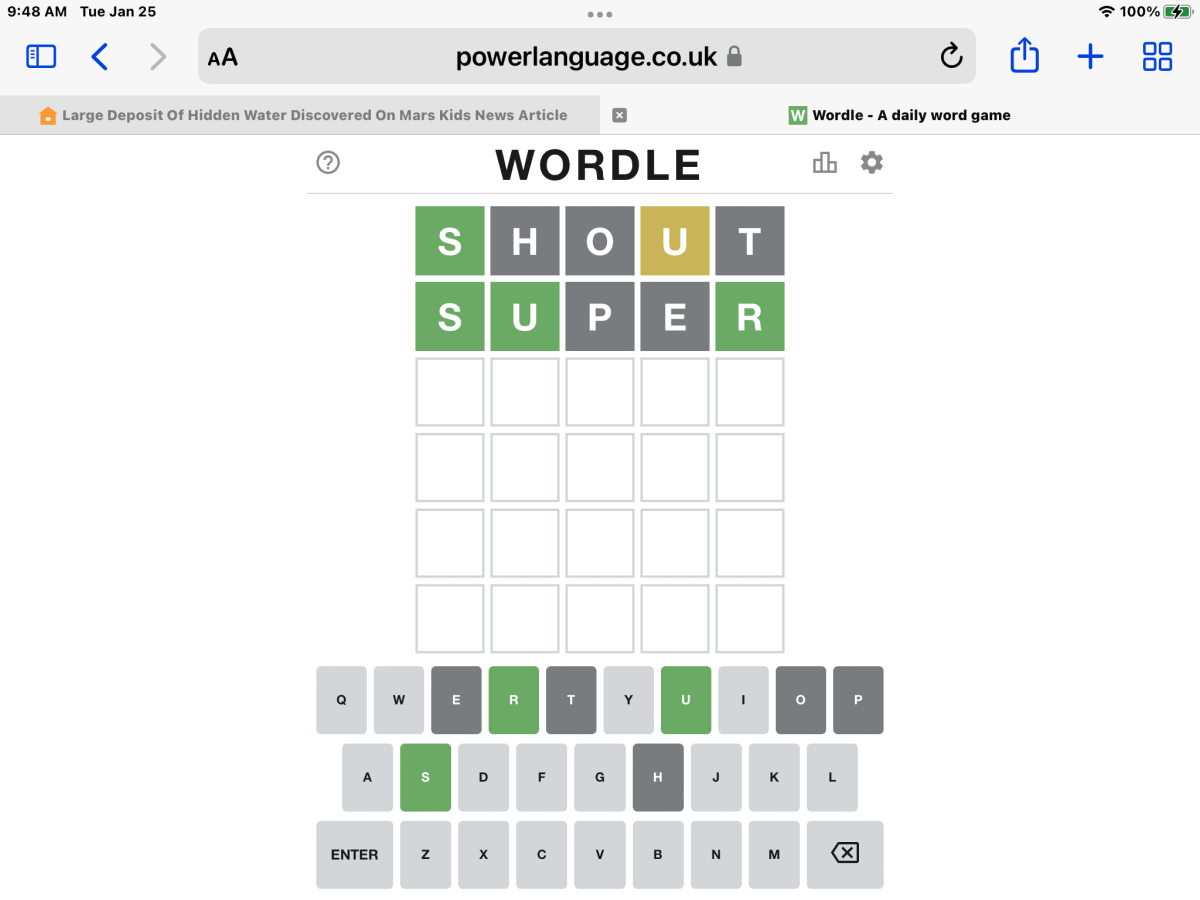 My third guess was the word “SUGAR”. “SUGAR” is the correct word – all five letter tiles are green and the game told me the play was “Impressive!”

Image 2: Screenshot of the same round on the Wordle website with “SHOUT” in the first row and “SUPER” in the second row. The third row has all green tiles with the word, “SUGAR”. 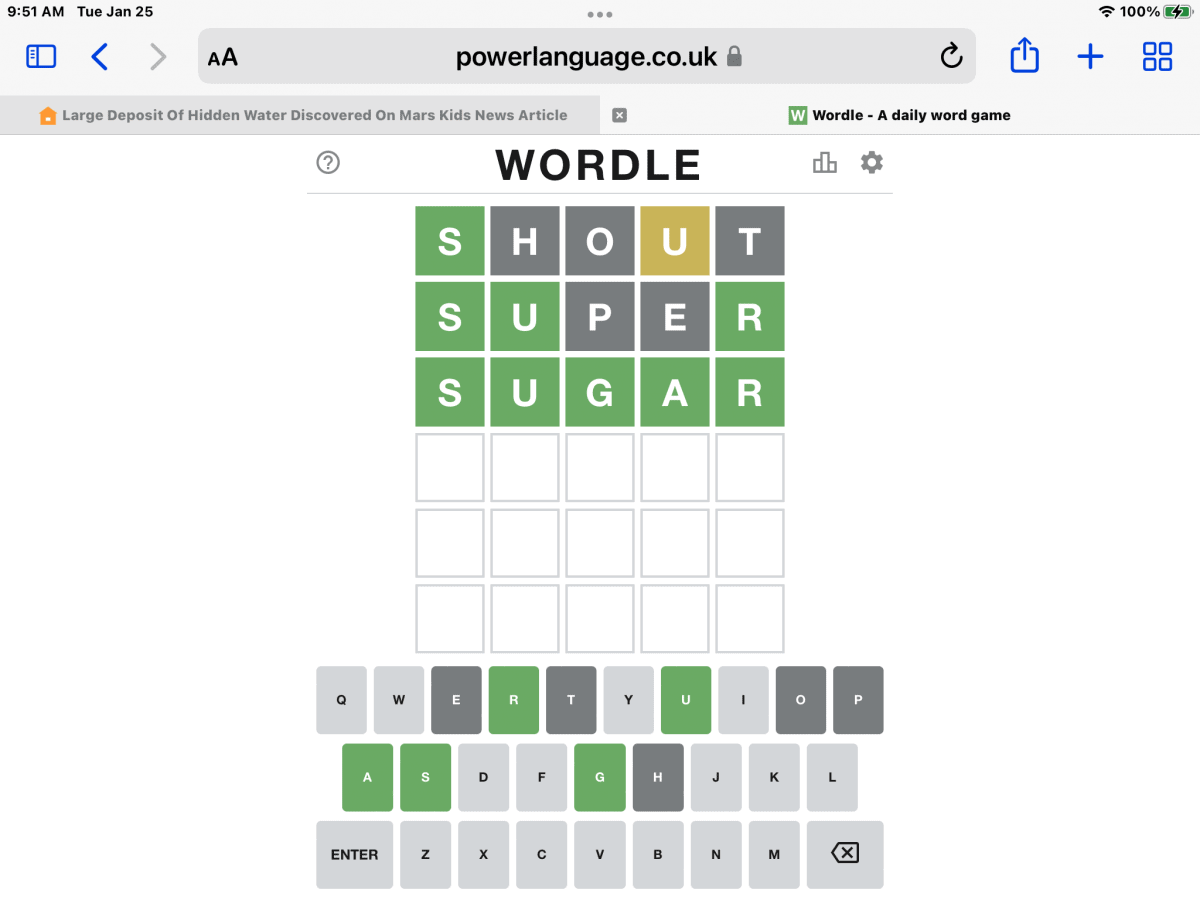 Note: This is a daily word game, meaning that you can only play one word each day.

A new word appears at midnight – the only time limit when playing the game is to complete your six choices (or less) by midnight.

Wordle is not accessible with a screen reader. While the keyboard and the letters in the tiles are accessible on the iPad with VoiceOver, the color of the tiles is not announced. Without the color hints, the player does not know letters are correct and if the letter is in the right position. 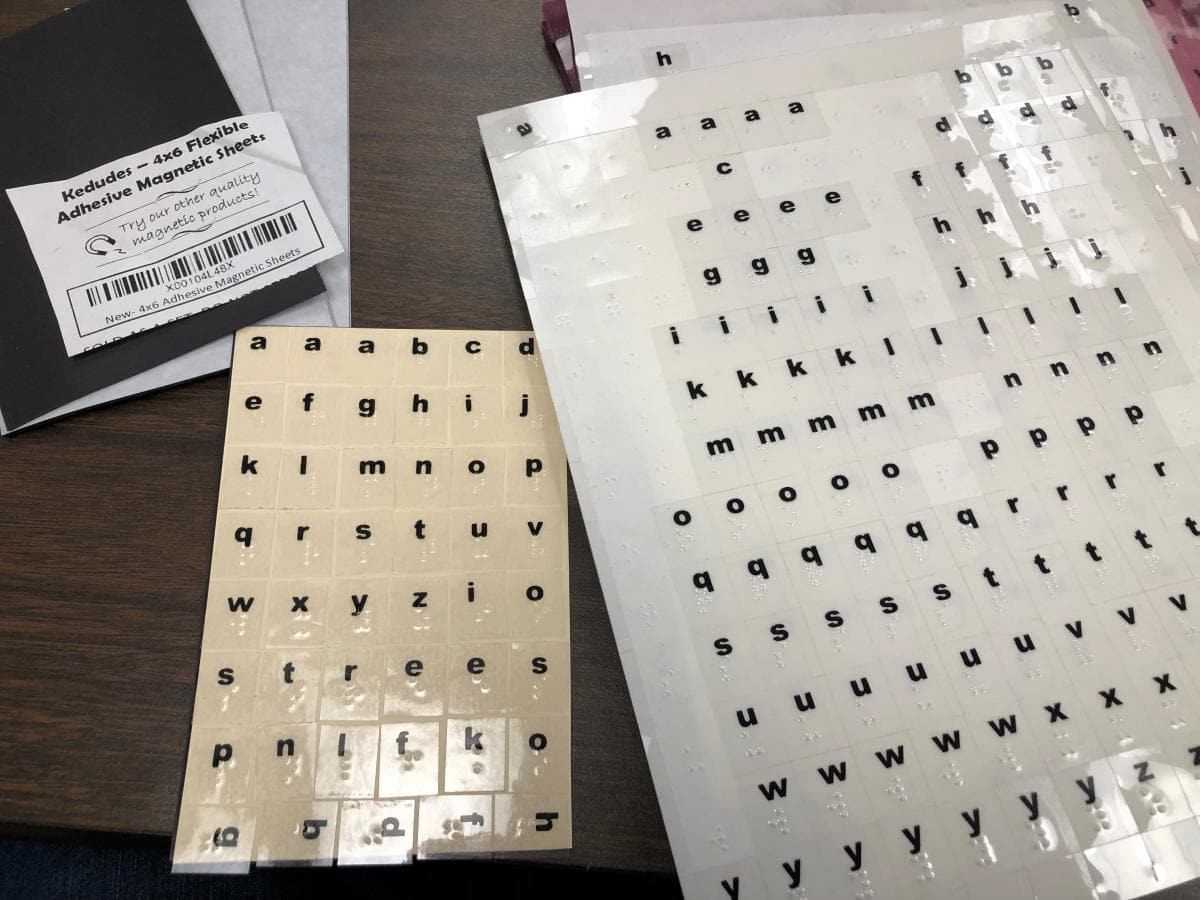 The student then places his next guess – the five letter braille word tiles – under the symbols. Note: The words and correct/incorrect symbols are placed in rows. The first letter of each guessed word and the accompanying symbols for the first letter are arranged in columns. If the student takes all six-word guesses, there will be 12 rows, as each guess will have symbols underneath each letter tile.

Image 4: Magnetic board with two braille Wordle guesses: First guess is the word “ORBIT” with tactile symbols underneath each tile showing that the “b” and the “t” are in the correct position and that the “o” and “r” are correct letters but in the wrong position. The “i” is incorrect. The second guess is “ROBOT” with green arrows under each letter, indicating that the word is correct!

The magnetic board has numerous braille tiles in alphabetical order at the bottom, yellow “carrot” symbols piled in the top left, blue “X” tiles are piled on the top right and the green up arrows are piled below and left of the word guesses. 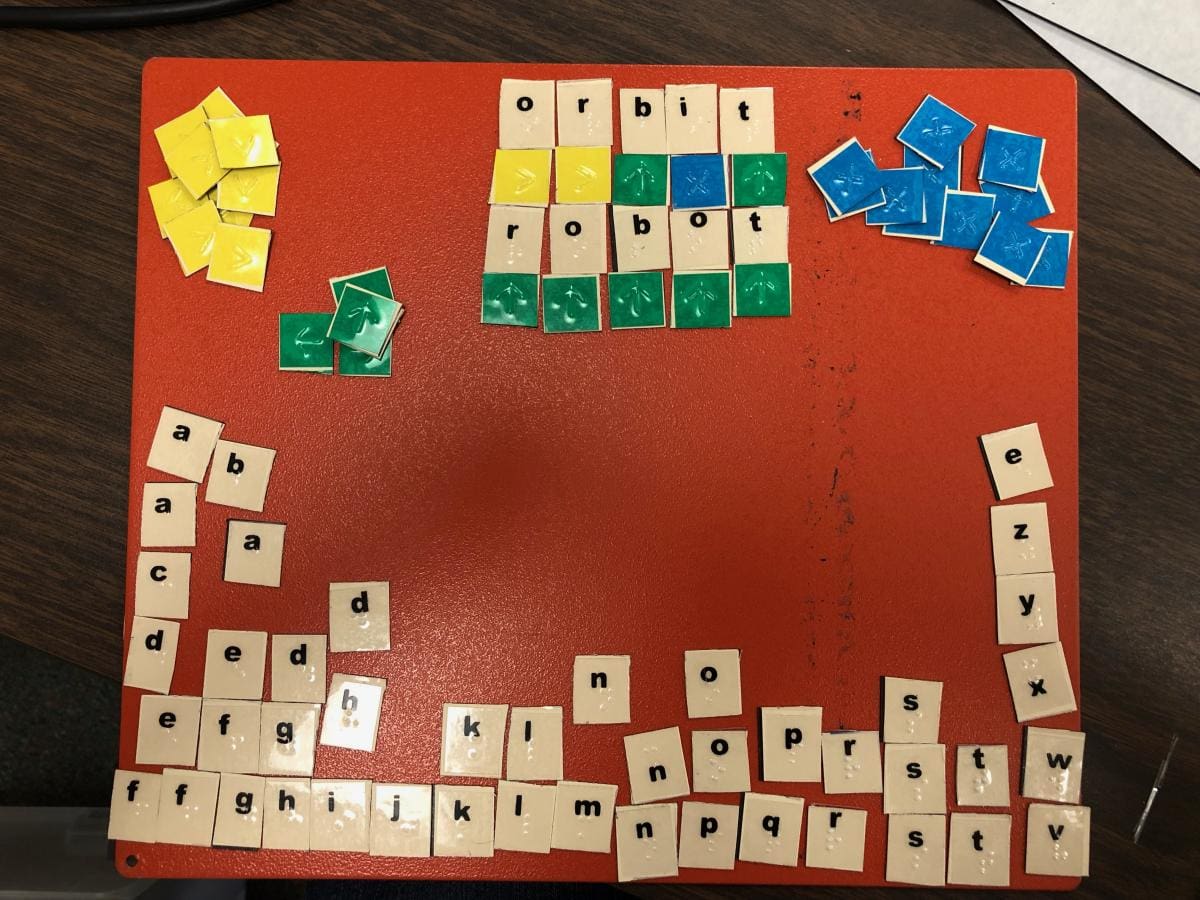 Wordle is an excellent way encourage students to build logical thinking. What strategies will you use to figure out the correct word? One popular strategy is to use words like “adieu” and “ouija” since these words use all the vowels. Other strategies might be to use the most frequently used letters: “E” appears most frequently in the English language followed by “A”, “R”, “I”, “O”, “T”, “N” and “S”. Another strategy is to use digraphs such as “SH”, “CH”, and “ST”.

Note: letters can be used twice!

As an educator with a student who is using the braille version, you have the option of choosing a word from the student’s reading, spelling list, or vocabulary list.

Since Wordle is set up like a grid, be sure to use the terms “row” and “column” when talking about letter positions!

Note: Wordle is a website and has one word each day. There is a free iOS app called Wordle, but the app is a different game – basically the game is to unscramble the given letters. The app allows you to choose how many letters in your word. The letters appear in a circle in the middle of the screen. Tap on a letter and the letter is placed at the top of the screen, in order in which they were tapped.  As soon as you make the correct word, a new scrambled word appears. This is a timed game and the time is super quick!

The Wordle iOS app (unscramble the letters) is accessible with VoiceOver.

Image 5: Wordle iOS App (unscramble the letters) with two letters selected and placed at the top of the screen “T, O” and two unselected letters available in the circle in the center of the screen, “N, W”. 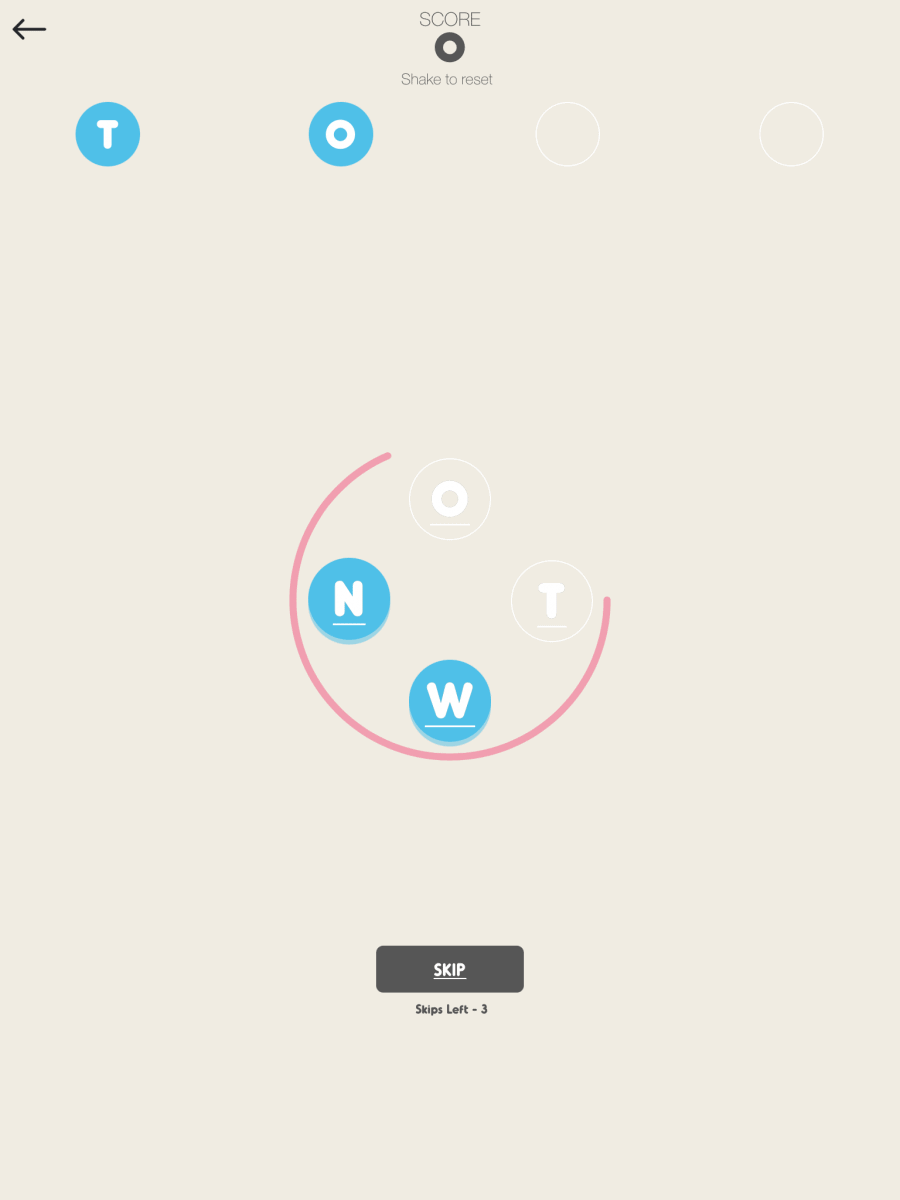 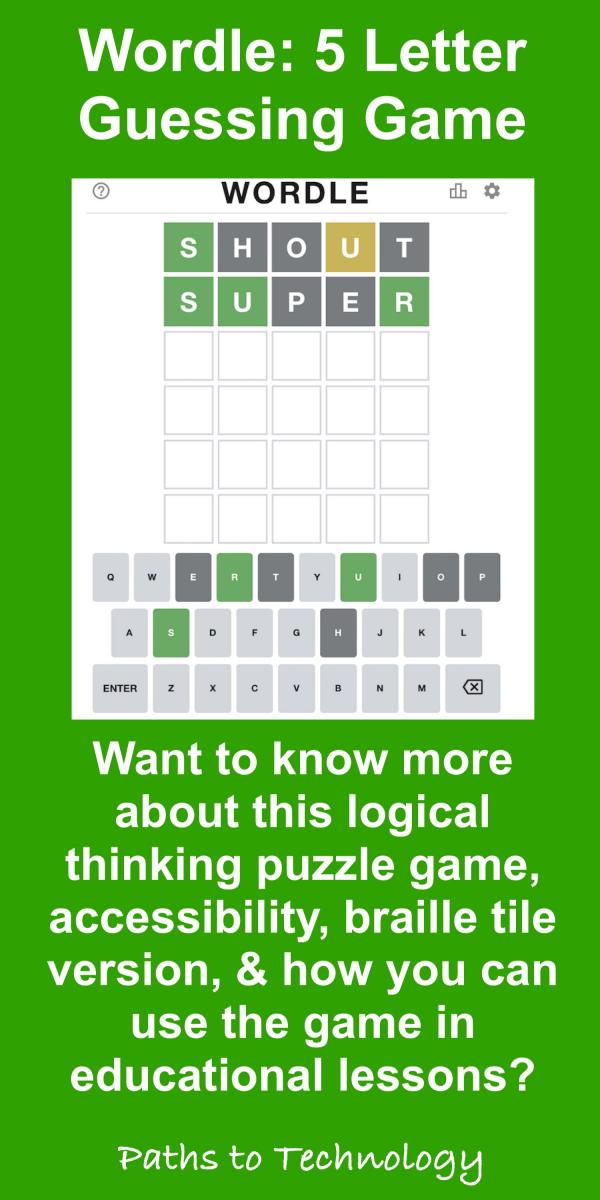