Real object materials make this multi-sensory project fun for kids of all sight levels to enjoy for days.

SHARE
By Cindy O’Connell
Decorating the schoolyard, or your backyard with winter sun catchers is a fun way to incorporate ELA, Mathematics and Science concepts using easily available materials from the kitchen and nature. Anything interesting (within reason!) can go into the sun catchers. The bright colors of the lemons, oranges and cranberries make the sun catchers visually interesting for students with sight, or partial vision, and the configuration of objects protruding through the ice make tactile exploration meaningful for students without vision. Collecting things you find in nature, with follow-up checks on the daily state of your sun catchers, provides multiple opportunities to walk outdoors to observe weather patterns, changes in temperature and the change in seasons. It also reinforces basic concepts, such as: hot/cold, indoors/outdoors and the concept that weather is something that happens outdoors (Energy in the Earth System).

You will need:
Decorate each pie plate with an assortment of collected objects. Pour in enough water to cover. Fold a shoelace, or ribbon in half and drape it over the side, so that half of the shoelace is in the pie plate to make a loop for hanging (or, place a small cup, such as a recycled medication cup, weighted with pennies, rice, or pebbles, into the pie plate to create a hole). Put the sun catchers outdoors to freeze overnight, or place them in the freezer until frozen. Remove from pie plates after they have frozen. Hang them outside a window, off the back porch, or on a tree.
Before you begin to make the sun catchers, create a Language lesson around the objects you have collected. For example, you might start by exploring each of the objects. Talk about what senses are being used to get information Life Science (Biology), identify properties (e.g., shape, color, texture), work on building a descriptive vocabulary (Vocabulary and Concept Development), generating a response, constructing a sentence, following a direction, or turn taking. Structure the lesson around the needs of your students and use personal communication systems and language support strategies (e.g., open-ended sentences, phonemic cueing, rephrasing and sentence expansion) as needed. Incorporate classification skills into the project by sorting the collected material into like groups, e.g., the pinecones in one group, cinnamon sticks in another (Properties of Materials and Matter and Patterns, Relations and Algebra). If you are working on object identification, or following single step receptive directions, focus on “find the orange,” or “find all the cranberries.” Sort by color, texture, or shape to reinforce basic concepts. Group all the things you found outdoors, or that came from the kitchen. Start with the classification system in place, or label each bin with the name of the object.
Decorating sun catchers can be set up cooperatively to encourage social interaction. Setting up individual workstations in a cooperative setting can also be designed to develop student-specific skills, such as number concepts. For instance, you could set the first workstation up to target the concept of “just one.” The student at this station could be instructed to take one pie plate, “just one,” from the stack/bin of pie plates and place one, “just one,” orange slice into it before passing it on to the next student. The next workstation could be set up for a student working on number concepts to three. The student at this station could count out three cinnamon sticks and pass it on to a student working on number concepts to ten, who could add ten cranberries. Model rote scripts to facilitate interaction for students who need them (“David, here’s the sun catcher”) and program switches and use communication systems as appropriate. After decorating the sun catchers, fill the pie plates with enough water to cover the objects. Use this step as an opportunity to work on pouring. To teach pouring to a student with no vision, model how to hook his, or her index finger over the rim of the pie plate and pour until the water touches it. Another method is to fill a small pitcher with water and teach students to pour to the count of ten. You can also put the appropriate amount of water in a pitcher and assist with pouring it into the pie plate. 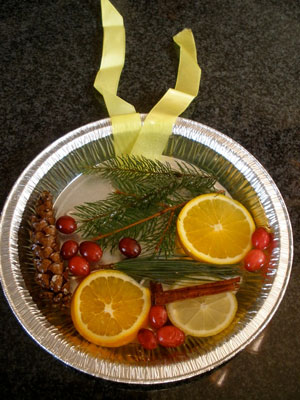 Do an experiment, put some sun catchers in the freezer and some outdoors. See which ones freeze first. Introduce a thermometer. Compare the temperature outdoors to the temperature in the freezer. See which is colder. After hanging the frozen sun catchers, take daily trips outdoors to observe the effects of weather on them. Log the temperature reading over a week. Relate readings to hot and cold (Energy in the Earth System). Observing the changing state of the sun catchers as the weather warms will meaningfully demonstrate the concept of melting and that water changes as a result of temperature (States of Matter).
Make follow-up experience-stories (Language & Composition) to document the project. Let the students write their own stories, or scribe what they dictate. For nonverbal students with no vision, or limited vision, help them make a book using objects from the activity. Build in choices. Let them decide what they want to include by choosing from among the objects you used in the project. Use your computer to make switch operated stories with voice out-put and Mayer-Johnson pictures (or import pictures you took while making the sun catchers) using an authoring software program, such as Intellipics Studio. If you don’t have access to special education software you could make electronic books using PowerPoint.