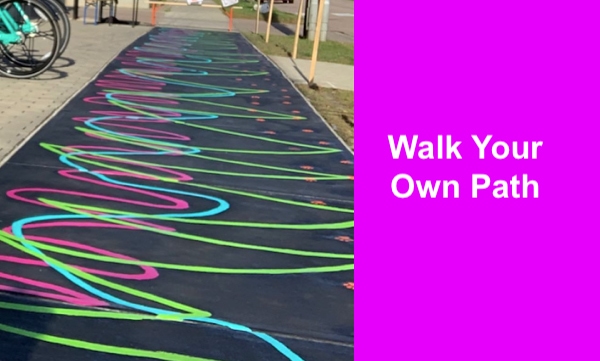 Walk Your Own Path: Sidewalk Mural

Honoring the different paths to independence!

Walk Your Own Path is a sidewalk mural made from cane strokes and guide dog paw prints. A black painted sidewalk creates bold contrast with fuchsia, green, blue and orange strokes and paw prints. The cane lines and paw prints are painted different colors representing various participants. Next to the mural, in large print and braille, is a sign describing the project including a visual description of the mural and a description on how to orient to it.  Shelby Glass, a Certified Orientation and Mobility Specialist (COMS) from Vermont and two young artists who are visually impaired, created the piece. The mural is located in the Old North End of Burlington, Vermont.

Walk Your Own Path shines a light on the complexities of being visually impaired by honoring the different paths to independence that people take. By creating public art that is not only attractive and interactive, but celebratory and accessible as well, this project enriches the culture of the neighborhood while attempting to mend the disconnect between the visually impaired and sighted world.

With the mural’s simple design, the concept is meant to be replicated. Since the mural’s debut on White Cane Awareness Day, it has attracted the attention of communities across the country and was featured on New England Cable News as well as in other online news periodicals. There is interest amongst COMS and various disability advocacy groups, to learn how to replicate a version of the project in other communities.

Over the next few months, Shelby will be preparing a presentation to share with others, explaining how she executed the project from start to finish. With the possibility of this concept spreading, Shelby hopes that people’s interactions with the murals will spark community discussion about disability visibility, universal design, and employment access amongst people who are visually impaired. Please email [email protected] if you have interest in learning more about this project and possibly bringing it to your community.

Paint the sidewalk black to provide a high contrast.

A cane user walks on the black sidewalk with chalk attached to her cane. As she walks, she leaves a visual trail of where her cane has swept. (A stick of chalk is taped to the bottom of the cane.) 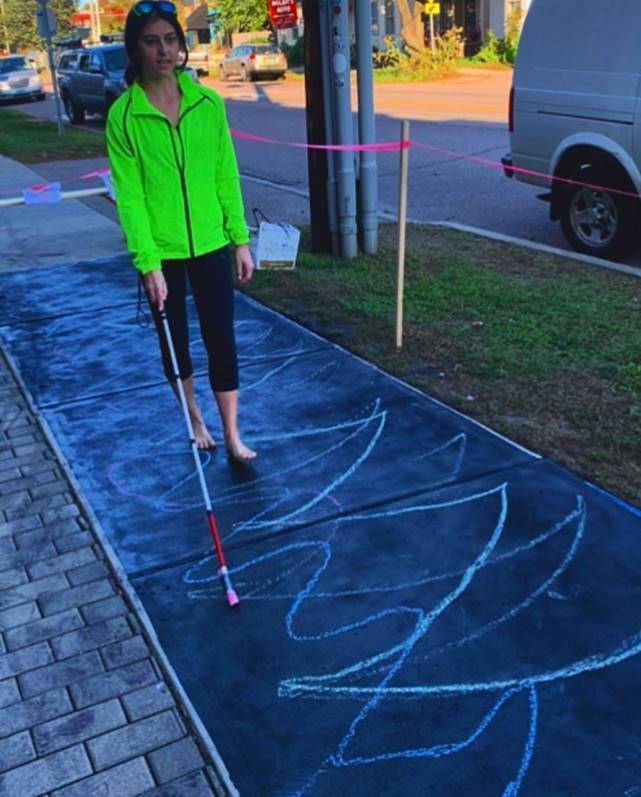 An artist traces over the chalk tracks in fuchsia paint. In the photo below, Shelby stands proudly next to her finished mural. The mural spans 11 squares on the sidewalk.

The neon green cane path has wide arcs reaching almost to the right and left sidewalk edges; the cane lines come to a point at the end of each sweep. This cane user has a big stride and consistent, bold cane arc. The Walk Your Path sidewalk has three brightly colored cane pathways. The fuschsia cane path has smaller, tighter arcs which are closer together. This cane traveler has a concise, small stride. The blue cane path goes from the middle of the sidewalk to the right edge of the sidewalk with round ends at the end of each sweep. Orange guide dog prints travel in a straight line along the left edge of the sidewalk. Shelby shows a blind participate a tactile model of the sidewalk mural and the surrounding area before she takes her turn walking down the block with her guide dog. Note: The dog’s paws were chalked to create the path. 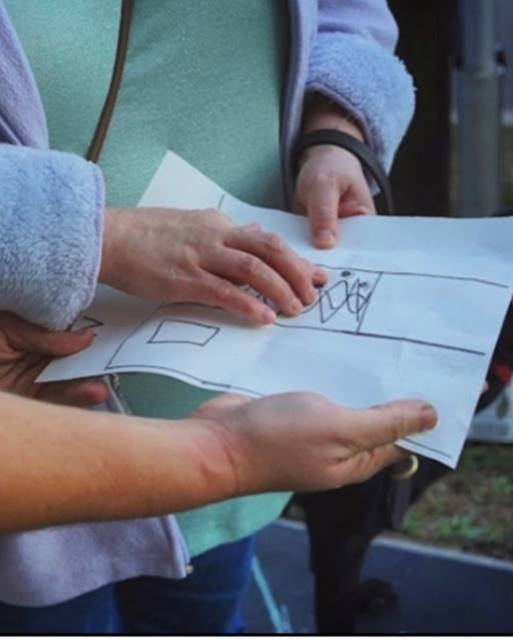 A large print and braille sign describe the project and how to orient the mural. 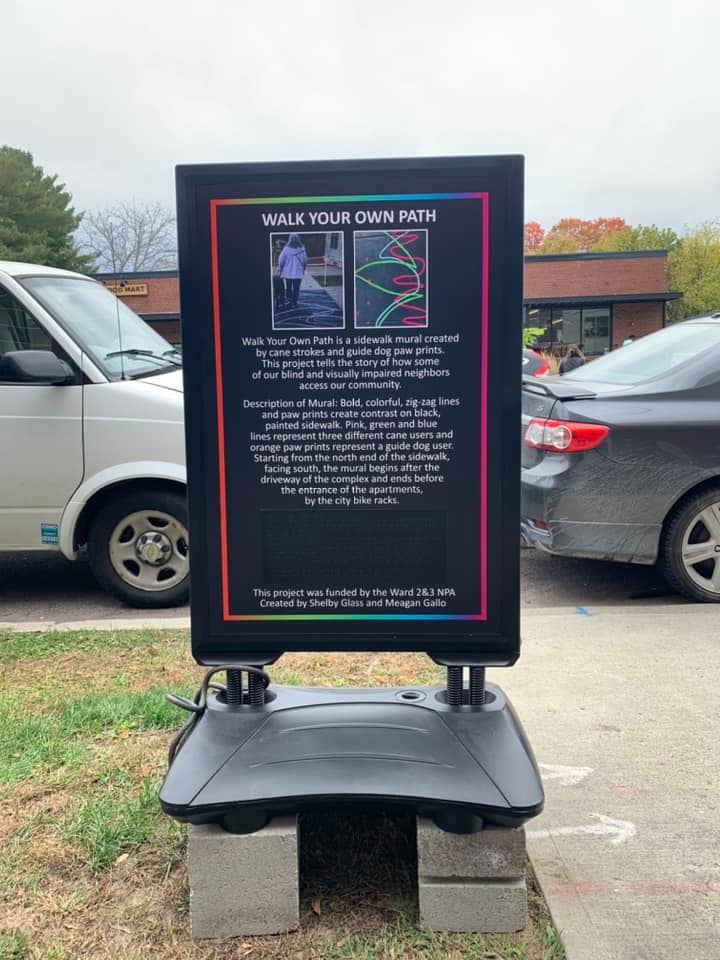 The sign title is, “Walk Your Own Path” with two pictures of the sidewalk mural. The first picture is of the traveler walking with her guide dog to create the paw prints. The second image is a closeup shot of the finished mural with the brightly colored cane paths and orange paw prints. Below the images is the following text:

Walk Your Own Path is a sidewalk mural created by cane strokes and guide dog paw prints. This project tells the story of how some of our blind and visually impaired neighbors access our community.

Description of Mural: Bold, colorful, zig-zag lines and paw prints create contrast on black, painted sidewalk. Pink, green and blue lines represent three different cane users and orange paw prints represent a guide dog user. Starting from the north end of the sidewalk, facing south, the mural begins after the driveway of the complex and ends before the entrance of the apartments, by the city bike racks.

This project was funded by the Ward 2&3 NPA