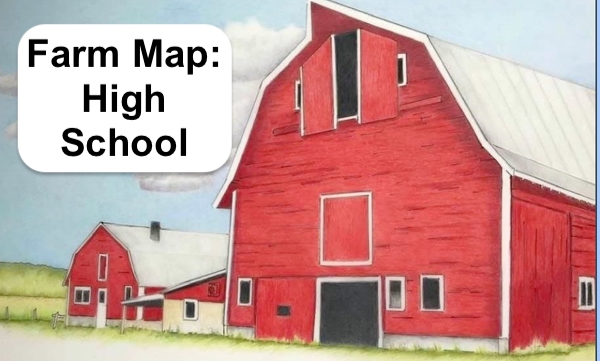 Learn about a Vermont farm using a non-visual digital map!

During the Perkins Non-Visual Digital Map workshop, orientation and mobility specialists learned how to create, use and apply non-visual digital map skills. Each participant was asked to create a map and to write a short scenario on how she/he would use her/his non-visual digital map during an O&M lesson. This is the Vermont Farm map and lesson.

Note: SBissonette, a COMS who participated in the workshop, created the Vermont Farm Map and goals along with her student’s scenario.
The goal is to introduce the concept of a non-visual digital map to a tech savvy teenager.

The goals listed above are for a high school student who has not yet independently downloaded an extension and gleaned information from simple user guides. This student’s goals are broken down into smaller tasks. As always, provide opportunities for the student to be as independent as possible; if a student needs subtle help, try sharing written directions instead of coaching him step-by-step. If absolutely necessary, observe and coach as necessary while he installs the Google extension and as he explores the map using the keyboard commands.

See Remote O&M Instruction for Students Transitioning to College: Building a Mental Map post for details on how to introduce non-visual digital maps to students who are visually impaired, including how to draw conclusions from the data points on the map.

Fun Facts about this Vermont Farm!

After using the map to learn about this Vermont Farm, my curiosity was sparked and I wanted to know more about the farm itself – how old is the farm, how many acres, what kinds of crops, etc. The owner of the farm graciously shared more details! I bet your student has questions too!

After your student has drawn his/her conclusions about this farm, then share these fun facts: