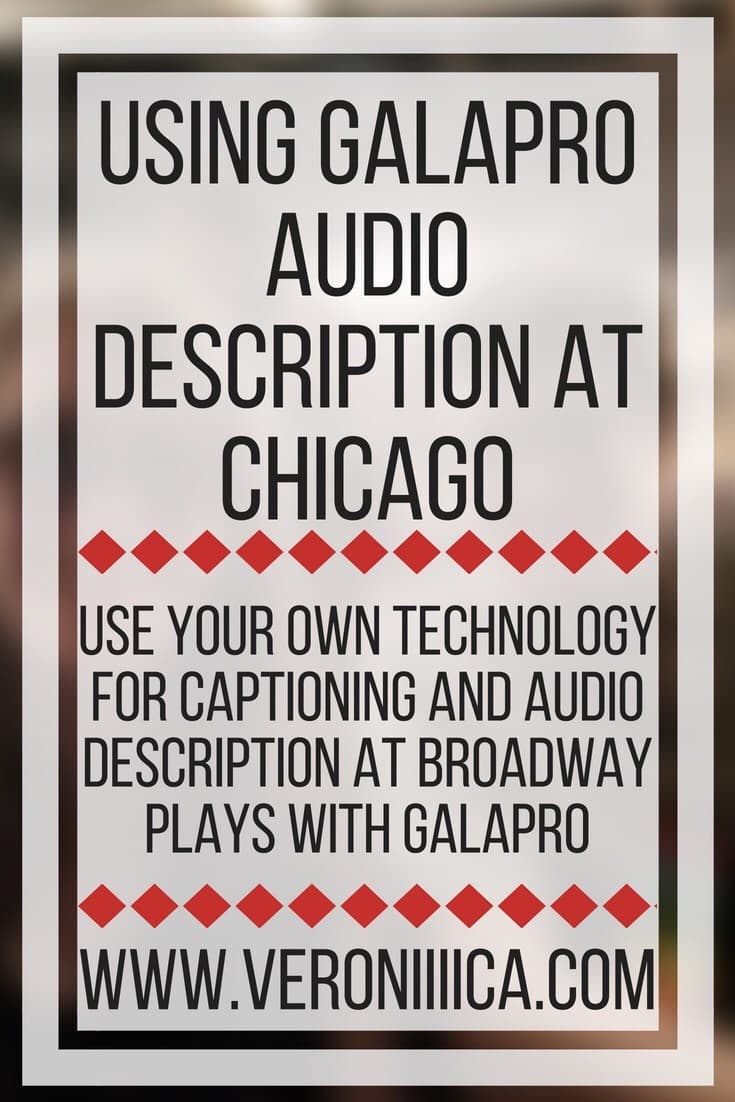 Use your own technology for captioning and audio description at Broadway Play with GalaPro.

While I was in New York City, I had the opportunity to collaborate with GalaPro and interact with their audio description service that is used in several different Broadway plays. Often times, Broadway plays have a strong focus on things like choreography, costumes, and changing sets, and it can be difficult to understand what is going on as a visually impaired audience member. Luckily, audio description makes it possible for everyone to be included, and the GalaPro app makes it audio description even easier to obtain. Here is my review of the GalaPro technology used at the famous Broadway play, Chicago. If you’re not familiar with audio description, read my post that explains it here.

GalaPro is free to download and use at the theater, and people legally cannot be charged extra to use audio description services at the theater. Download for iOS on the App Store here and for Android on Google Play here.

GalaPro is very simple to use and requires the following technology skills:

GalaPro can be enabled once you are in your seat at the theater, though I strongly recommend making an account in the app before you get to the theater. Once you are seated, go to your device settings menu and turn on “airplane mode.” After that, connect to the GalaPro wifi hotspot and enter in the password, which will be provided at the accessibility window for the theater. From there, select the play you are attending and follow the onscreen directions.

In order for the app to work, airplane mode must be turned on so that there are no other interfering signals. Also, the device cannot have the screen locked and must remain on for the entirety of the performance (though I found this only drained my battery by about 7%). Since the screen is very dim, the light is not distracting at all.

The pre-performance description lasts about 10 minutes and begins when the app is activated for the show, cutting off right as it begins. The description talks about the different characters and their physical descriptions, such as their hair color, build, and makeup. Details of the costumes are described as well, though there are no costume changes during the play. There is also a description of the set, which remains unchanged through the play, and the different props that are used for dancing such as ladders and stairs.

Audio descriptions are provided whenever there is a pause in dialogue or during music as movement changes. As the show goes on, listeners can learn how the characters move across the stage, their facial expressions, visual jokes, and choreography during dance numbers. For example, during the dance number for “Cell Block Tango”, I got to hear how the dancers moved around in their chairs and their facial expressions as they sang. In another scene when one of the main characters, Roxie Hart, enters the stage, I was able to figure out where she entered from and where she had gone on the stage.

Do I need to know about dance?

Chicago is a play that features many dance numbers and 20s style dancing. While I took dance when I was younger and can understand dance terminology, you don’t need to know anything about dance to understand the descriptions. Some examples of movements described include kicks, spins, gestures with arms, and moving from side to side. Speaking of dance, read more about including dancers with vision impairment here.

How it helped me

I tend to get very confused while watching plays without audio description because I miss a lot of what is going on- just ask my friend who once had to answer my questions about a play we went to for 45 minutes afterwards. Luckily, GalaPro eliminates that issue. I was able to follow along without any delays and understand what was going on, without constantly having to ask my brother what was going on. The character descriptions helped me the most, so I could easily figure out who was talking, and who they were talking to.

Chicago is an awesome play, and thanks to the audio description services GalaPro provides, theatergoers with vision impairments can be included in the one-of-a-kind Broadway experience.