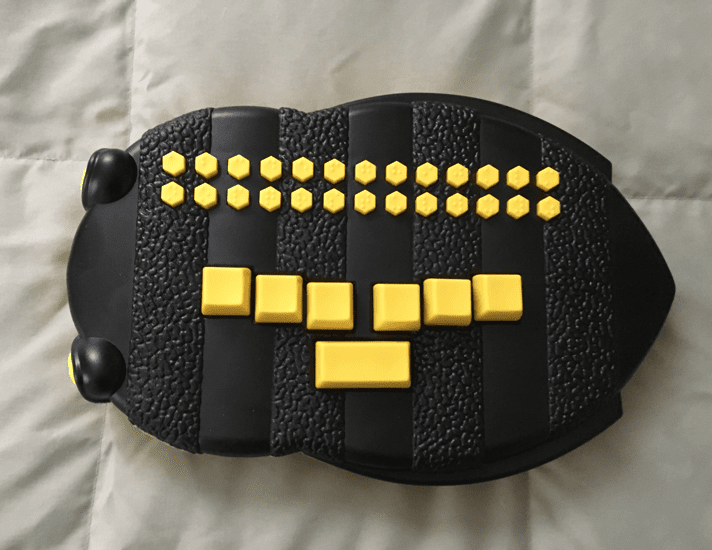 TVI and Kindergartener’s Review of the Braille Buzz

Is your student an emerging braille reader? Check out this fun device!

When I arrived at school after winter break, I was excited to obtain the BrailleBuzz for my kindergarten student. According to the APH website, “BrailleBuzz is an instructional toy for young braille learners ages two to five”. BrailleBuzz is shaped like a bee, with two eyes located on left side and a stinger on the right side. The top panel is black, with yellow honeycomb shape buttons with braille letters of the alphabet along the top and a yellow Perkins style keyboard with 6 keys and a space bar at the bottom. Both the top and bottom of the device have smooth and textured stripes resembling the stripes of the bee. BrailleBuzz requires two AA batteries, which are not included.  The battery compartment and speakers are located on the bottom of the device.  I found it difficult to unscrew the battery cover. However, once my husband inserted the batteries, BrailleBuzz worked exactly as described in the user manual. Braille Buzz is light weight, so it easy for a young child to pick up and carry.

To turn on BrailleBuzz, hold down the honeycomb shape letter A. You hear a chime and the device says, “Hi, I’m BrailleBuzz.” BrailleBuzz appears to use a female human voice to provide audio feedback when you push the keyboard keys or the honeycomb shaped braille letter buttons. To turn it off, press Space and the letter Z at the same time. The device will say “Bye Bye” in what sounds like a child’s voice. One nice feature of the BrailleBuzz is that it will automatically turn off after not being used for 2.5 minutes, thus saving battery power. To adjust the voice volume, press Space and the letter V at the same time. There are two volumes: loud and quiet. Both my student and I found the device easy to turn on and off, but the loud voice to be too loud, especially if the student is sensitive to initial loud sounds.

My student and I have explored all three playing modes: Phonics Mode, Keyboard Mode, and Letter Mode. Press space and the letter M at the same time to change the playing mode. Below are descriptions of each playing mode.

Children learn letter sounds by pushing the honeycomb shaped letters. When you push a letter or key combination to write a letter, the letter name and the sound it makes is announced, as well as a word associated with the sound. A sound that represents the letter is then played. When you push a keyboard key or combination of keys that don’t represent a letter, silly sounds are played (sounds like a spring or whistle).

Example: When you press the letter c, BrailleBuzz says “C makes the sound /c/, as in car.” and plays a car horn beeping. This was my student’s favorite sound associated with a letter on the device.

When you turn on this mode, the following instructions are announced. “Remember your left hand presses keys 1, 2, and 3. Your right hand press keys 4, 5, and 6. Your thumbs can press the spacebar. Let’s try it.”  When you press a key or key combination, the dots numbers associated with key(s) are announced. If a student pushes the letter in this made, the letter names are announced.

For my kindergartener, I have incorporated using the BrailleBuzz into daily braille instruction two or three days a week. My student’s goals focus on reading and writing all 26 letters of the alphabet in braille, as well as alphabetic word signs and writing her name, thus this device is a great addition to our learning activities.

Below is list of some activities I often complete with my student daily.

After using the BrailleBuzz twice, my student could independently turn it on and off. With a teacher model, she can easily change the playing mode. Her favorite modes are Phonics Mode and Letter Mode. BrailleBuzz is a highly motivating device that can be incorporated into daily braille instructions for young braille readers. I would recommend using it for up to 5 minutes a day when incorporated into other braille literacy activities. Personally, I have found that this device is a great bridge between a Perkins brailler and refreshable braille display, as keyboard is similar to several simple braille displays that do not have a backspace or enter key. This device also makes it easier for young children who do not have enough finger strength to write letters using a Perkin’s brailler. My student personally prefers writing using the BrailleBuzz or a refreshable braille display over a brailler because the keys are easier to push.

“I am good at reading and writing braille. See.” She then typed all 16 braille letters of  the alphabet correctly.

“It is hard to put my finger on the button. It is too small for me to read.”

Overall, the BrailleBuzz is an excellent early learning tool to use with young braille readers. My student’s only complaint is the small surface area of the honeycomb shape letter keys. Since my student has been working hard at not scrubbing to identify letters by tracking from left to right across braille letter cards, she has found that letter keys are too small. If there was a larger surface area it would be easier for her to identify the letter without scrubbing.