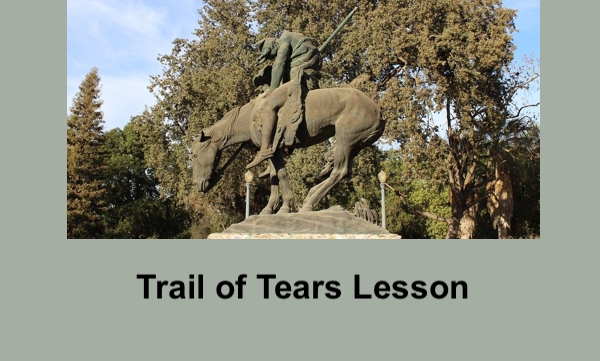 Information, activities and resources - including an accessible non-visual digital map - relating to the Trail of Tears.

It is 1830. The population of  U.S. citizens in Georgia is growing rapidly and pushing into the western portions of the state. However, the Cherokee nation occupies a large area of western Georgia. Treaties signed between the United States and the Cherokees guaranteed them the rights to this land, but settlers have begun to move into these territories, sparking conflicts with the Cherokees that were growing voilent. The discovery of gold within the Cherokee territory in 1828 has only made the situation worse. At the urging of President Andrew Jackson, the Committee on Indian Affairs drafted a bill that would give the President the power to order the removal of all Native Americans living east of the Mississippi River to designated lands west of the Mississippi.

Research the reasons for “removal” of the Cherokee Indians. Read President Jackon’s first and second annual messages, delivered in 1829. Choose a viewpoint (President Jackson or Cherokee Indians) and write a persuasion paper with discussions points on why the Cherokees should be removed or why they should stay. Or, divide the class in two sections and debate the issue.

Hint: Prior to becoming the President of the United States, Andrew Jackson was an army general who spent years leading campaigns against the Creeks in Georgia and Alabama and the Seminoles in Florida.

The first of three groups of Cherokees departed Tennessee in June 1838 and headed to Indian Territory by boat, a journey that took them along the Tennessee, Ohio, Mississippi and Arkansas rivers. Approximately 2,800 people traveled by boat. Heat, extended drought and disease soon made travel along this water route impractical, so that fall and winter thousands more Cherokees were forced to trek from Tennessee to present-day Oklahoma via one of several overland routes. Federal officials allowed Chief John Ross to take charge of these overland removals, and he organized the Indians into 13 groups, each comprised of nearly a thousand people. Although there were some wagons and horses, most people had to walk.

The route followed by the largest number of Cherokees – 12,000 people or more, according to some estimates – was the northern route, a distance of more than 800 miles through Tennessee, Kentucky, Illinois, Missouri, Arkansas and into Indian Territory. The last groups of Cherokees made it to Indian Territory in March 1839. (Exerpt from history.com)

While the numbers vary, it is believed that about 4,000 Native Americans died on the Trail of Tears.

Discover the Trail of Tears: A Lightning Lesson from Teaching with Historic Places (Questions for Map)