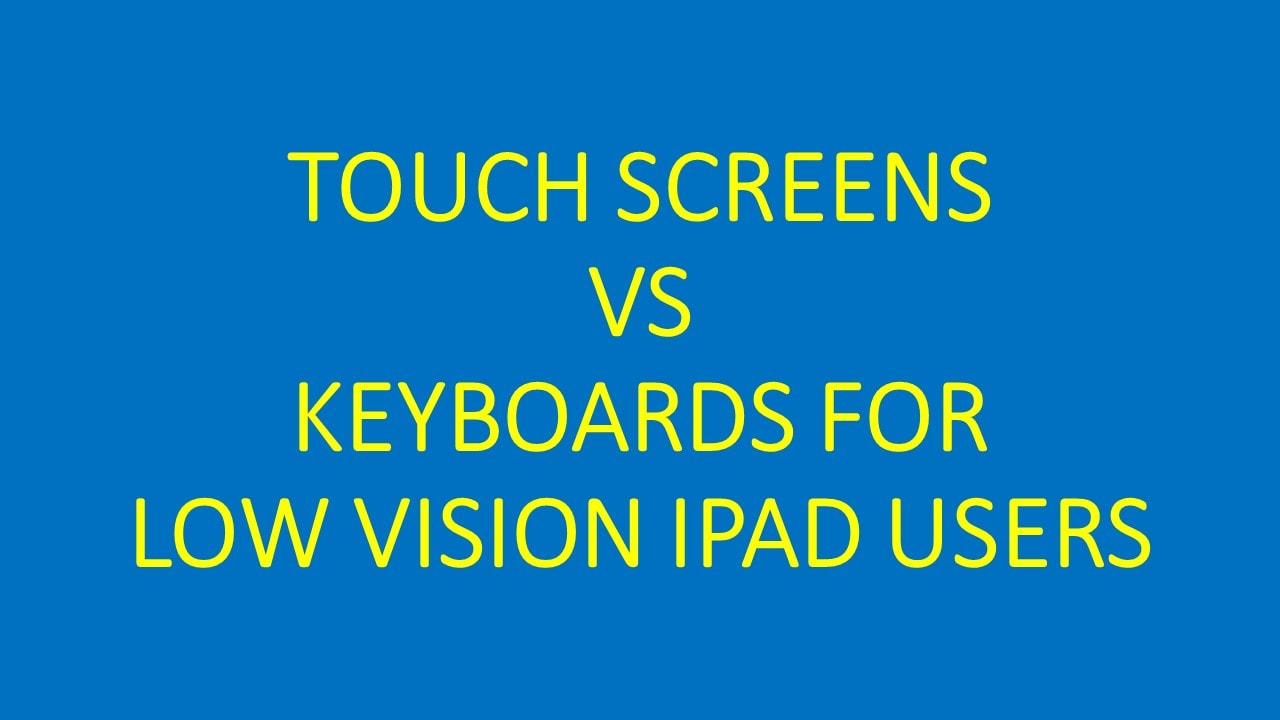 When zoomed in & writing on iPads, individuals with low vision should decide between dragging on the screen or keyboard shortcuts to proofread their work.

Happy New Year! I thought there’d be no better way to ring in the new year than write a new blog post, so here we go!

During my last student visit of the school year, I ran into an interesting situation that should be valuable to all of you users and educators reading this.

My student is in high school, and he has pretty low visual acuity.  That said, he is still a visual learner.  He conducts a lot of his school work on his iPad, and I have been working with him to be more productive with it, including typing on a keyboard.  For reference, this is the keyboard he uses, made by Belkin (more info here).  I like it a lot because the keyboard is full sized and uses a wired connection to any Apple device (lightning and 30 pin versions are available) which is so much simpler for students than to worry about bluetooth connections, battery life, etc.

Going back to my student visit, I have been having him type notes and other writing tasks with the keyboard.  As he types, he uses the iPad’s Zoom screen enlargement accessibility feature to magnify the text so that he can see his work from an upright seated position.  Zoom can be enabled in Settings => General => Accessibility => Zoom => On.  My student uses a three finger double tap to zoom in, and the related Follow Focus feature will automatically pan the zoomed in screen to track the text as it is typed, a very neat feature. (I have found that this feature does not work in the Microsoft Word app.  My student conducts much of his typing in Apple’s Notes app and Follow Focus works great!)

We reviewed his typing skills, which can be summarized as checking on this form, accuracy, and speed.  After he wrote up a few sentences for me, I had him re-read his work as an exercise in proofreading.  What my student instintively began to do was drag on the screen with three fingers to manually pan the zoomed in screen and read his work.  This approach worked well enough at times, but my student was generally slow in his panning and occasionally did not adequately touch the screen with all three fingers, leading to mistaken swipes and other gestures.  All in all, the proofreading tasks quickly became arduous and inefficient; there is a very low chance of him proofreading his work like this when I am not present with him.

So, I decided to present him with a more functional, “hands off” alternative.  The solution? Keyboard shortcuts!  More specifically, much like on a computer, iPads support keyboard shortcuts that allow users to navigate character by character, word by word, and line by line (not to mention beginning/end of line and top/bottom of document).  Everything is very similar to what a computer user might be familiar with.  For example, my student used the (Command key (cmd) + up arrow) hotkey to navigate to the top of the document.  When he did this, the iPad’s Zoom focus jumped with the cursor to the top of the document.  From there, my student simply needed to move word by word by holding the alt/option key down while pressing the left or right arrows.  Just like that, he was able to move the cursor from word to word, reading what he had written with much greater efficiency than his manual dragging method.

I hope this quick tidbit illustrates the benefits of learning keyboard hotkeys for productivity’s sake, as well as pointing out that we as users and educators should continually be assessing how efficient we are with the processes we are committing ourselves to (i.e. touch and drag panning).  If we’re not quite as functional as we should be, practice might be necessary to get to our desired effectiveness, or we may need to explore alternative methods for completing the task.