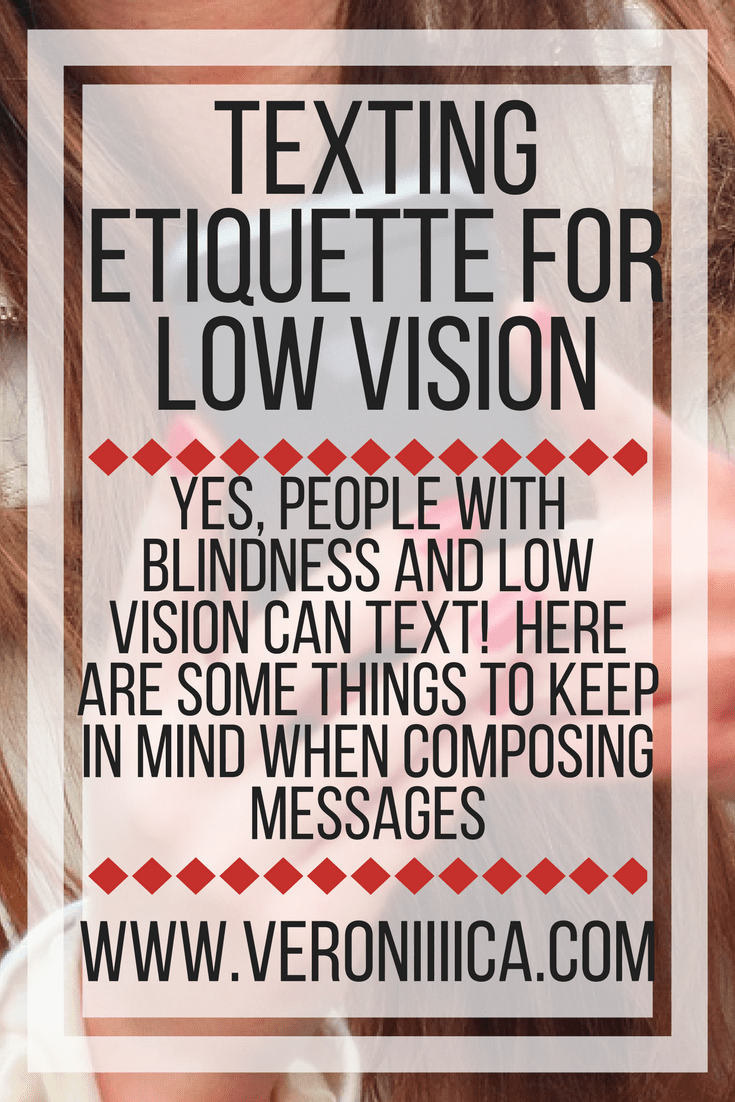 Yes, people with blindness and low vision can text! Here are some things to keep in mind when composing messages.

One of my friends found a post online that was telling people not to include several emojis in the middle of a text message if the recipient is visually impaired.  I thought it was really awesome that so many people were learning from this post, and decided to create a texting etiquette guide for messaging people with blindness or low vision.

Yes, people with blindness or low vision are capable of reading and writing text messages.  This is made possible through accessibility settings in the phone (read my post on Android accessibility here) as well as third party apps (read my post on making Android accessible with third party apps here).  Typically, users speak their reply into a speech-to-text software or have a large print keyboard.  Unless someone explicitly says they cannot read or write text messages, it’s okay to send a text.

No need to write in all capital letters so the recipient can read the message clearly.  This will not affect the display size of the font.  Rather, it will seem like the recipient is being yelled at.  Writing in all lowercase letters is okay, though proper grammar is always nice.  When composing a reply, the speech-to-text software may ignore capitalization and send messages in all lowercase letters.

The maximum amount of emoji I can handle in a text message is about three, though I can tolerate more if they are at the end of a text message.  It’s a bit annoying when someone puts twenty emoji in the middle of a text message, as the phone will read each individual emoji description, and the recipient may lose interest in continuing to read the text if they have to listen to the word “birthday cake” a dozen times.  Users with low vision may also have difficulty distinguishing emoji- I frequently confuse the different hand emojis and facial expressions.  Avoid conveying critical information with emoji.

When sending a web link, use the shortest possible link available.  Many websites have link shorteners built in for social media services.  While not all screen readers do this, some will read out entire links.  Make sure to note what the link is to- for example, my friend sent me a message saying “here’s a link to the restaurant we’re going to” and then added the link in a shortened form.

Understandably, people with blindness and low vision may not be able to distinguish pictures very well.  While there are lots of apps that use automatic alt text (which describes the picture), alt text is not always completely correct- automatic alt text described a picture of my brother outside as being a picture of a car.  While pictures can be enlarged, it helps to include a description of the image along with the message, such as “this is your brother sitting outside.”

Typically, it is easy to infer what a word is in a message, even if it is misspelled.  Avoid adding extra letters to the end of words for emphasis, as it may become difficult to decipher the word.  Some screen readers spell out unfamiliar words, or if several letters are added to a normal word.

If a phone sends long messages in several parts, instead of one large message, have the messages numbered so they can be read in order.  These may take longer to read, since the user has to figure out the order of all of the messages.

This may seem like a lot of information, but it’s really simple- write text messages with proper grammar and spelling, and everything will be fine.