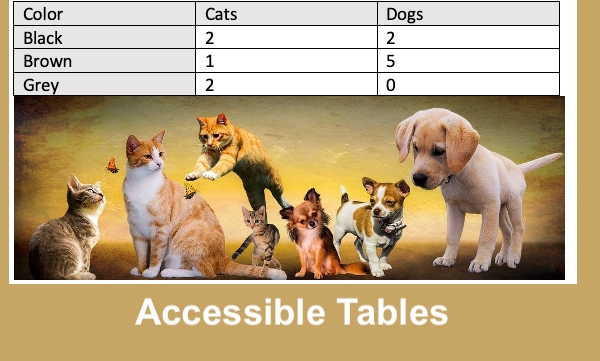 Learn how to create an accessible table (for teachers) and how to navigate a table with a screen reader (for teachers and students).

All students are introduced to simple tables in general education kindergarten classrooms in paper/pencil (or tactile) formats which quickly transition to digital formats. Students first learn the foundational concepts such as top, bottom, left and right, then students apply these directional concepts to rows, columns and grids. Next, students should learn to create and use simple tables before learning before applying this table knowledge to spreadsheets, which are more complex. As always, braille students should be introduced to tactile representations at each stage before pairing the tactile with a similar digital activity.

​This post is specifically about how to navigate a table using JAWS. Tech Standards typically mention specific spreadsheet skills and do not list the pre-requisite skills of understanding row, columns, grids and tables. (See Tech Standards below.) It is simply understood that students have these concepts and apply this knowledge to spreadsheets. Let’s start by defining  what is a table along with the difference between a table and a spreadsheet.

Difference between a Table and a Spreadsheet

At table is a set of facts or figures arranged in columns and rows. It is a useful way of organizing information.

When the focus is on a cell in the table:

In the video below, Phillip White demonstrates how to navigate a table with JAWS.