Try these tried and true tips when learning VoiceOver gestures or when teaching students/adults 2-finger gestures.

In the first post in this series, we discussed the 1-finger iOS gestures. (See Teaching VoiceOver Gestures: 1-finger Tricks and Tips post.) This post will focus on the most common 2-finger gestures. When teaching VoiceOver – or when learning VoiceOver gestures yourself! – keep in mind that everyone learns at their own pace and has their own learning style. One student will speed through the various gestures in one or two sessions, while another student might spend a month or two on one gesture. As always, review and practice before adding a new gesture. These physical gestures need to be regularly practiced to build muscle memory. Think about how quickly you can type your full name or your iOS password. Do your fingers just know where to go and what to type? Now try typing “Mississippi”. With it’s repetitive characters, that should be a really easy word to type; but, you probably had to think about the spelling – character-by-character and then where those characters are on the keyboard. Muscle memory is important and it takes practice to develop the muscle memory to create consistent and efficient VoiceOver gestures!

I like to think of the two-finger gestures as the “reading” gestures.

2-Finger Swipe Up: Read the page starting at the top

2-finger Swipe Down: Read page starting at the selected item

Students who use a Perkins Braille Writer are used to using strong finger motions in order to push the manual keys. When initially creating a 2-finger gesture, often these students will have very stiff fingers  and the fingers will be locked together. Just like the students learned to use a gentle tickle touch when creating a 1-finger gestures, students will now need to learn how to physically create consistent 2-finger gestures. When using two or more fingers, the fingers should be apart from each other. When the fingers are kept together, often the middle finger – which is the longest finger – will touch the iPad screen first and iPad interprets this as a 1-finger touch. Spread the fingers apart eliminates this issue. Also, the fingers should be very relaxed and slightly curved.

“Running” Exercise: Use the same positions (left hand palm up and right hand extended two fingers) and make a running motion with your fingers by quickly lifting and lower the index finger then the middle finger. The fingers can run in place or run along the palm and fingers of the left hand. Make sure that the fingers are relaxed, spread and the taps are gentle.

“Kicking” Exercise: Use the same positions and have one finger “kick” out as if kicking a pretend ball on the palm of the left hand. Repeat and have the right finger kick the ball. Drag the ball back (kick backwards or pull the finger in towards the palm of the right hand). Now, pretend to be an Olympic kicker and kick with both fingers (kick out and kick in).

Now using the iPad, go to the Home screen and tap a random spot in the middle of the screen (to move the VoiceOver focus to the middle). Make the 2-finger swipe up gesture (2-finger kick out). VoiceOver will jump to and start announcing the first item on the screen and continue to move forward through all the items on the screen. This is the Read All starting from the top gesture.

Note: If the student struggles with physically creating the 2-finger gestures, then go to the VoiceOver Practice screen and practice these gestures.

Note: In iOS 13 beta, the location of the Accessibility page in Settings has been changed; Accessibility will no longer be under General, but will appear on the left column of the screen as Accessibility (making it easier to locate quickly).

The video below demonstrates the two Read All gestures and teaching hints.

One of the biggest issues with VoiceOver is that VoiceOver is “chatty” – VoiceOver does not always know when to be quiet! the 2-finger single tap gesture will pause or continue VoiceOver speech. Some students like to call this the “shut-up” gesture. Trying to model good behavior when working with students, I tend to call this the “Viper” gesture, as the motion can be exaggerated to resemble a viper (snake). With 2-fingers extended, apart, and slightly curved, pretend to quickly strike out in the air as if you were a viper striking. Add a little “sssss” or even “shhhh” sound! Students love this gesture and making the viper movement will help them associate the movement with the ‘be quiet’ gesture!

Note: If you have music on your iOS device and are running VoiceOver, EVERY TIME you do a 2-finger double tap, the music will start or stop playing – even when you are not in a music app! So, be prepared – if your student’s music blares, use a 2-finger double tap to silence it!

The video below demonstrates the 2-finger single tap and 2-finger double tap gestures and teaching hints.

Initially, start by teaching the physical rotor gesture; this gesture can be challenging for some students, so start with the physical activities, then practice making the gesture using the VoiceOver Practice screen before applying the rotor to perform a specific task. Details about what the rotor does makes more sense when you can actually apply this gesture.

To practice the general “twist” motion used in the rotor gesture, twist the cap to loosen the cap on a water or soda bottle. (Twist to the right/clock wise is equivalant to moving to the next rotor option.) Now, twist the bottle cap to the left, to tighten the cap on the bottle. (Twist to the left/counter clockwise is equivalant to moving to the previous rotor option.)

For some students, having a physical model of the rotor is also helpful. Here is a post about a 3D printed rotor (complete with 3D printer files) and another post about how to create a simple tactile rotor. 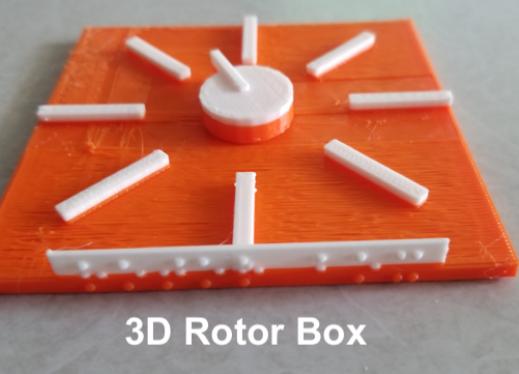 Now ask the student to practice creating the rotor gesture in the VoiceOver Practice screen. There are various ways to make the physical gesture:

The rotor is a virtual menu that is always available when VoiceOver is on; however, it is only visually seen on the screen immediately after making the rotor gesture. Visually, the rotor is circular and looks like a dial. As you create the rotor gesture, the dial moves in a circle pointing to various options. The option which is highlighted appears in print at the top of the rotor and VoiceOver announces the item. Make the rotor gesture again, and the rotor moves to the next item. The rotor is designed to provide instant access to a menu of options/tasks. (Example: The rotor is used to provide on-the-fly access to options such as the VoiceOver speaking rate. From any location/app, make the rotor gesture multiple times stopping on the Speaking rate option,then swipe up to increase or swipe down to decrease VoiceOver’s speaking rate.) The menu choices will change according to the app you are currently in. I like to tell my students that Apple is smarter than I am – the iPad anticipates what options I will need at any specific time. Some rotor items will only appear at appropriate times. (Example: The Table rotor option will only appear if I am currently reading an Internet article or in a document that has tables. The Table option gives me the ability to move vertically within the table using the up/down arrows.) To keep the rotor from having too many options, I can select which rotor features to appear in my rotor menu, when applicable.

(Be sure Characters and Words are selected as options in the rotor for the next activity.)

Now, navigate to the calendar app. Use the rotor to select Characters. Now, swipe down to read the information character-by-character. Navigating by character is a critical skill when a student wants to learn how a word is spelled – especially someone’s name, as there may be many ways to spell a name! –  learn the spelling of an email address, or edit a misspelled word in a document.

The video below demonstrates the 2-finger rotor gesture and teaching hints.

The 2-finger Scrub is a more advanced gesture and may not be introduced to students who are ready for only the basic gestures. However, the 2-finger scrub is an efficient gesture – it is basically the “back” gesture. While most apps are set up with the a button in the top left that takes you Back one screen, for students who are visually impaired, navigating to that button and activating it takes time. This Scrub gesture can be performed anywhere on the screen and performs the same action.

To apply the gesture, open the Settings app on an iPad. Go to the rotor options:

If an app developer created their pop-up menus correctly, you can use the 2-finger scrub to “back” out of a pop-up menu. Note: Not all pop-up menus have been made to be compatible with the scrub gesture.

Review the 1-finger and 2-finger gestures with Synchronized Swimming using the VoiceOver Practice screen and then apply these gestures to the Home screen.