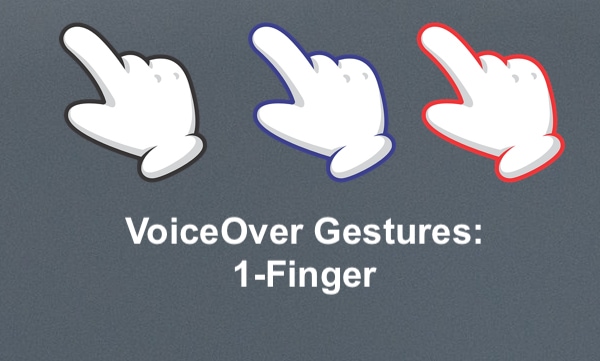 When iPads first rolled out, there was quite a buzz in the educational community about how iPads can be used in the classroom. Teachers of the Visually Impaired (TVIs) quickly jumped on the band wagon as it became apparent that this mainstream device is also fully accessible for students who are visually impaired and blind. iPads were quickly adopted and TVIs eagerly sought workshops to be trained on iPad accessibility. I personally learned how to use VoiceOver by trial and error, along with devouring every resource available at the time (which wasn’t much in that first year or so!) and together, students and I found and tried various gestures and features. Teaming up with Ed Summers – a strong VoiceOver user – we trained over 750 fellow TVIs and COMS on iPad accessibility in the beginning iPad years. During this time, we learned alot about how to explain and teach the basic VoiceOver gestures in a way that makes sense to not only teachers, but also blind students. Many blind students, especially those who use the Perkins Braille Writer, tend to have similar issues as they are used to pounding on the Perkins keys. In more recent years, the initial need for introducing the iPad/iPhone is no longer a critical need as most educators personally use a tablet or smart phone. Patterns have emerged, however, with students who are learning VoiceOver gestures. It is helpful to understand these common issues and ways to specifically address them before the student becomes frustrated, before bad habits are developed and to fill in the gaps. There are many educators who continue to benefit from learning or reviewing VoiceOver gestures, common issues that students with visual impairments present, and information on how to teach VoiceOver gestures. In this series, we will review the VoiceOver gesture along with teaching tips including how to physically make each gesture.

The one-finger single tap gesture is used with and without VoiceOver, making it a very familiar gesture. With VoiceOver, this gesture will move the VoiceOver focus to that area of the screen and VoiceOver will announce what is there.

Students who are familiar with the Perkins Braille Writer are used to pushing hard – pounding – on the keys in order to produce solid braille dots. However, the iPad responds best to a gentle, quick touch. As an educator, I like to set my student up for success – especially when introducing technology! (Technology provides enough opportunities to practice patience and problem-solving skills!) Before asking the student to create the desired gesture, I introduce the “tickle touch”. With permission, I gently brush my index finger on along the student’s arm while talking about a feather-soft, tickle touch. I ask the student to practice making a tickle touch. I also compare how the Perkins Brailler requires a hard touch while the iPad requires a gentle, tickle touch.

Students who are visually impaired often initially create the one-finger tap in the form of a “dive bomb” – meaning their hand starts shoulder height or above and hurtles down to hit the iPad screen. This dive bomb method is hard on the iPad, inefficient, and is a bad habit as it makes the one-finger double tap gesture challenging (hard to create a fast double tap if the hand has to be raised above the shoulder again after the first tap). Instead of the dive bomb method, ask the student to hover his hand (palm flat) an inch or two over the iPad screen. Drop just the index finger to quickly tap on the screen. Only the index finger moves – the hand and wrist stays still. Note: You should not hear the finger tap the iPad – if you hear the tap, the tap is too hard!

The video below demonstrates the one-finger tap gesture and teaching techniques.

1-finger swipe right or left gesture: Move to the next or previous item

Like all VoiceOver gestures, this gesture should be a small movement. Often students who are visually impaired will start high, swoop down, drag the finger from one side across to the other side and take off again. In reality,  the swipe should be a half inch movement. To teach the one-finger swipe right, I start by making a fist with my left hand and then extending my left index finger out to the right. I then place my right index finger on the last joint of my left index finger, sliding the right index off the end of my finger. Repeat this motion multiple times quickly. I demonstrate this movement for my students, then ask them to demonstrate the same movement. Repeat for the left swipe but start at the end of the left index finger and swipe left to the first joint.

Most self-taught VoiceOver users love the 1-finger swipe right or left gesture – and often over use it! While the swipe right or left is a wonderful navigation gesture, keep in mind, that it may be more efficient to simple touch in the general direction of the desired item instead of swiping through a list of items. Example: On the Home screen, you can swipe through 20 apps to get to the desired app which is located at the bottom of the screen or you can simply touch the bottom of the screen and then swipe once or twice as needed to find the specific app. (Also, see Drag and Split Tap for more options.)

Note: Some students are very slow when swiping right through the apps on the Home screen. They listen to every app announcement and the VoiceOver hint before swiping again. Intentionally teach your student to swipe quickly – if he is looking for the Calendar app, he only needs to listen for “K” sound for “calendar”; if he hears a different phonetic sound, immediately swipe again. There are some students who are into speed and flick as quickly as they can without listening. For these students, you may have to slow them down to teach them better listening skills!

Posture and hand position is important with VoiceOver gestures. Some students will lock their elbow into their side while performing gestures. This often creates a curved swipe – especially if the student makes a bigger swipe. The iPad will recognize this curved swipe as a swipe down or up. The result is that the iPad will not react in the way that the student expects. (Typically a swipe up or down will change whatever is currently selected in the rotor.) Another student might lean his wrist on the table will performing a swipe right or left gesture. Again, this typically makes a curved line which the iPad might interpret as a swipe up or down gesture.

If a student is having trouble physically creating a gesture, go to the VoiceOver Practice screen to practice these gestures.

More information about VoiceOver Practice screen later in this post.

The video below demonstrates the one finger swipe right or left and teaching techniques.

Initially, most students will double tap slowly – and the iPad interprets these taps as two single taps. I often teach this gesture by quickly knocking on the table two times. Students hear the rhythm of the two quick knocks and instantly understand how “quick” the taps should be. Once the student has successfully knocked in rhythm, ask the student to hover his finger above the table top (similar to the one-finger tap position) and quickly tap twice. Then move to double tapping on the iPad screen in the VoiceOver Practice screen or to open a desired app.

Ed and I taught an iPad Accessibility workshop in Houston, Texas where the TVIs in the class struggled with the double tap gesture. Their double tap was tap (pause – wait for it, y’all!) tap. Yes, everything does move slowly in Texas. The following week, we taught an iPad Accessibility workshop in New York City. These teachers talked a mile-a-minute and their double taps were just as fast! When teaching students, encourage them to double tap like they are in New York City!

The video below demonstrates the double tap gesture and teaching tips.

Drag: Announces and selects item under your finger

The drag and split tap gestures often go hand-in-hand. The POWER of a touch screen device is that you always know where you are on the screen and where other items are in relationship to where you are. Dragging your finger around the screen encourages spatial concepts and mental mapping. Where is your Mail app located on your Home Screen? Paying attention to where an app is located on the Home screen (top, middle bottom of the screen, left, center right side of the screen, 1st page, etc.) and dragging in that area will build strong spatial concepts. Students quickly learned that most apps are set up in a predictable way, making it easier to navigate for all users. The back button is typically found in the top left corner. Type in an Internet search in the top middle of the screen. Additional features are located in the tool bar at the top of the page. As an O&M instructor, I have watched my students’s O&M skills significantly increase as students began using drag and split-tap and TVIs have commented about improved math skills; both O&M and math require strong spatial concepts and mental mapping.

Right or left swiping across the screen does not provide spatial information and does not develop mental mapping skills. When only using right or left swipes, the spatial piece is absent. A good touch screen user rarely becomes lost; if a student does become lost, simply touch the Home button and go back to the Home Screen!

Note: The VoiceOver Practice screen does not support drag and split tap gestures.

The video below demonstrates the drag and split tap gestures and teaching techniques.

Synchronized swimming is the Olympic water sport where swimmers perform together creating beautiful underwater shapes and images. The swimmers must perform together – be synchronized – or they will crash into one another. VoiceOver synchronized swimming is similar in that everyone performs the same gesture at the same time and VoiceOver will announce the gesture and action as one voice. This encourages students to react (not think deeply about each gesture) and to build muscle memory – all in a fun way! This works best with two or more students, but can be done with the teacher and the student both using devices and performing the gestures at the same time. FYI: Students love to call out a gesture for the teacher to perform! (Note: Teachers, make a mistake and let the student “catch” your mistake!)

Practice VoiceOver gestures by calling out a gesture immediately followed by 1, 2 3!  On the count of four, the student should create that gesture.

FYI: Call out the gesture (Example: 1-finger single tap) or call out the action (Example: Select the item under your finger).

Many students are so intrigued by VoiceOver and the VoiceOver practice screen that they will try a variety of gestures just to see if it is a real gesture and what that gesture does! Paired Bluetooth keyboard commands or refreshable braille display commands also work in the VoiceOver Practice screen.

The VoiceOver Practice screen can be used as students are being introduced to gestures and are also a great warm-up activity to practice and develop muscle memory for VoiceOver gestures.

The video below demonstrates the VoiceOver Gestures Practice screen.

To view the next series in this post, go to: 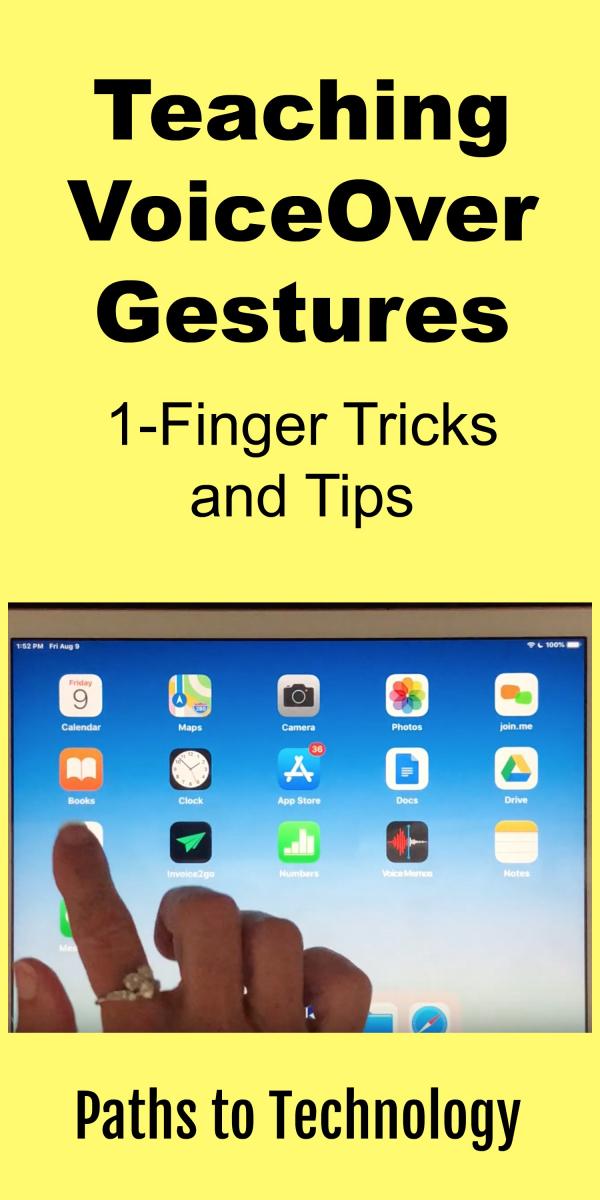