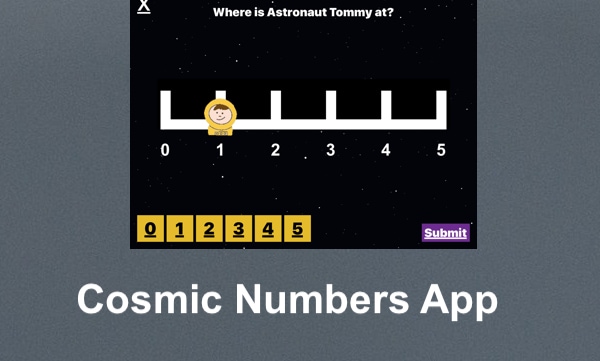 Now that your student has had practice with tactile number lines, it is time to have fun with this exciting and fully accessible number line app, Cosmic Numbers. Can you help Astronaut Tommy as he navigates through space filled with numbers?

There are numerous number line apps available that reinforce number sense and number lines. However, due to the visual nature of number lines, none of these mainstream apps are accessible for students who rely on a screen reader. App developers, textbook publishers and assessment groups struggle with making visual math concepts accessible in a digital format. The computer science department at the University of North Carolina is passionate about finding ways to make educational resources accessible for students who are visually impaired. (See Hidden Resources: Collaborative AT Projects with Universities post.) In the spring of 2019, a student team in the Serious Games course took on the project to make an accessible number line app; one team member continued to work on the app in another course in the fall of 2019. Cosmic Numbers is the exciting result of this project!  This app is intended to be a ‘proof-of-concept’ app for app developers, textbook publishers, and assessment groups; the app is currently not available in the app store. Cosmic Numbers is fully functional with four levels. Let’s take a look at the app!

A big thank you to Jessica McDowell – TVI extraordinaire – and her student Logan for their creativity and input about number line concepts and skills taught in general education classrooms! Their expertise guided and nurtured Cosmic Numbers. Careful attention was given to how number lines are represented in general education classrooms and the skills needed to access these number lines. These same concepts were embedded into Cosmic Numbers.

There are four games/levels in Cosmic Numbers – each game is carefully designed to teach a specific number-line/number sense skill: If a wrong answer is chosen, you will be given a hint that the correct answer is greater than/less than your answer. In Level 2, the player will drag Astronaut Tommy to the desired “Tick” (number given) and click submit. Astronaut Tommy is located in the top left corner. Below him is the Back button and the the directions. Below that is the  number line ranging 0 – 5. In the bottom right corner is the Submit button.

After an update, VoiceOver now announces the directions as soon as the page opens – listen carefully for the given number. Drag your finger to the top left corner to find Astronaut Tommy. Double tap-and-hold activates the drag-and-drop gesture (listen for the “bloop-bloop” earcon (sound) that indicates drag-and-drop has been activated). Drag down the left side of the screen, stopping on either the “Tick” or “0”. Drag your finger to the right either counting the “Ticks” or listening to the numbers being announced. When on the desired “Tick”, lift your finger. This will drop Astronaut Tommy and you will hear a satisfying “splat” sound. Drag to the bottom right corner and split tap on the Submit button.

Note: Astronaut Tommy must be dropped on the “Tick” or number line and not on the number!

The video below demonstrates Level 2 of the Cosmic Numbers app (drag Astronaut Tommy to the desired number). The video below demonstrates Level 3 of Cosmic Numbers (comparing numbers: smaller or bigger). Note: Picker Items are an essential tech skill that is frequently incorporated into digital textbooks and assessments. Students with visual impairments need to have opportunities to become efficient with Picker Items through game play!

The video below demonstrates Cosmic Numbers Level 4 (greater than, equals, less than).

Cosmic Numbers was updated since the videos in this post were created. The update included:

A second team of UNC students worked on Cosmic Numbers as a class project Spring 2020. See these exciting updates in the Cosmic Number Semester 2 post here!

Cosmic Numbers is gamification at its finest! Students with visual impairments are learning and practicing number sense and number line skills while becoming proficient with a variety of critical tech skills as they play this game. Besides the obvious math skills, students are also learning to apply tech skills to digital math concepts such as dragging across the screen in a straight line, building mental maps about numbers such as the 5 is located on the right side of the screen, learning terms such as bigger/smaller, greater than, equals and less than and so much more. Finally, a fun math concept game that can be used by by all students in a general education classroom!

A big thanks to these passionate and dedicated professors and students for developing this fully accessible number line app, Cosmic Numbers!