Introducing addition and subtraction to a young braille student using a number line.

Addition and Subtraction on the Number Line

Once Logan mastered the basic number sense concepts discussed in the first post, he was ready to be introduced to simple addition and subtraction using the number line.

Not surprising, Logan had a hard time with accurately counting tactilely on the number line, especially when moving backwards to subtract. Sometimes he felt the numbers to count instead of the tick marks. Trying to say one number while feeling another did not work well!

Jessica decided to back up and played a game with plastic ladybugs using a 10-frame tray cut in half longways and made into 1×10 (instead of a 2×5). She added a row of corresponding braille numbers below the ten frame (each number aligned centered with each ten frame square). In the picture below, the corresponding braille numbers ranged from 1-10. Jessica made additional corresponding number lines such as 10 – 100 (counting by tens) that could easily be swapped out. 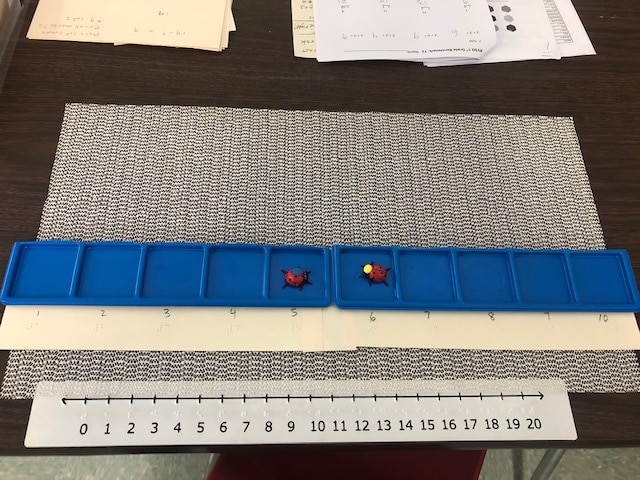 In the video below,  Logan was given a small braille sheet with “3 + 7 =  ” on it. With a small prompt, he remembered to start on square 3 and moved his fingers and the ladybug to square 3. After that, his left hand moved one square ahead holding his place while his right hand hopped the ladybug – named Spot – to the next square and Logan counted aloud from one to seven. He was at the end of the squares and guessed that he was on square 10. Using his right hand, he reached down and first read the braille number 9, but then went back up to check the square with the ladybug and confirmed his number answer by dragging his right hand straight down to the number 10. After finding his answer, Logan squirmed in his seat and moved the ladybug rapidly back and forth in the square as he repeated his math equation.

In the next video, Logan was given a brailled worksheet with the equation “10  –  7  =  ” Logan moved both hands immediately to the last square in the 10-frame. He did not check the braille number, as he knew this number line has the range of 1 – 10. He held the ladybug in his right hand and used his left hand to touch the square to the left; however, he skipped the square (which should have been number 4) which made his ladybug land in square 2 instead of square 3. Logan quickly dragged his left hand down to find and read the #2 in braille while keeping his left hand on the ladybug.

In the video above, Logan demonstrated that he knew the process on how to find the correct answer; although, he needs more practice on physically finding each and every square correctly.

Once Logan demonstrated consistent adding and subtracting skills using the ladybug and 10-frame, Logan went back to using a teacher-created braille number line ranging 0-10. In the next video which was taken on a different day, Logan was given a braille worksheet with six number line problems. The fifth question was “10 – 3 =  “. Logan read the braille problem aloud using two hands. It appears that he ran the fingers of both hands across the braille numbers as he counted; the left hand fingers stayed on the number and the right hand finger moved up to the tick mark with each count.

In the next video, Logan has an embossed math worksheet on his desk and is using APH’s 0 – 200 number line with the scale of 10 (numbers increase by 10). After reading the problem (which was not a part of the video), Logan’s fingers move between 100 and 110 multiple times. Jessica gently prompts him to think about the sign of operation and asks Logan if he ‘has a plan’ and to repeat the problem. Logan quickly answers the questions and jumps to figuring it out. He then places his hands on the braille number 100 and counts the braille numbers by tens: ten, twenty, etc. His fingers follow the braille numbers not the number line with its dots (tick marks). Logan was so excited when he landed on 50 that he jumped up from his seat and bounced! Logan automatically restated the math equation.

Some of the number lines used in these activities have actual perpendicular lines for tick marks, while other number lines, such as APH’s 0 – 200 Number line use circles which are located on the horizontal line. Students should be exposed to both and understand that they are different formats that represent the same thing.

Again, students will progress at different paces according to their age and their abilities. Logan has been practicing simple addition and subtraction skills using the more manipulative 10-frame and then tactile number line. He has practiced different versions of the same number family: 3 + 7 = 10, 10 – 7 = 3, etc. and has become more familiar with these simple math equations, which helps build his number sense and helps his physical number line accuracy. Logan has and continues to build a strong foundation for number sense!