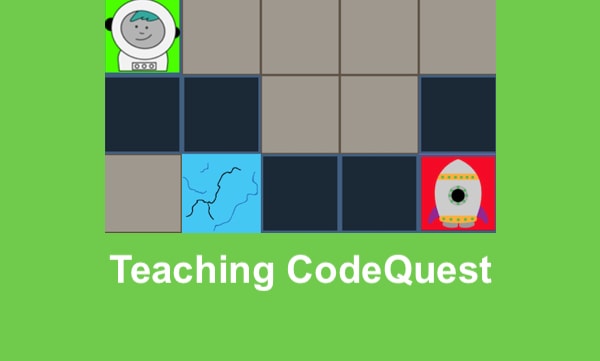 Teaching the CodeQuest App to Students who are Visually Impaired

Coding concept games are navigating through a maze; how can students with visual impairments access digital mazes?

Coding concept games are introduced in mainstream preschool and kindergarten classes. These early logic games center around unplugged activities (no devices) and may include manipulating physical objects. There are numerous Paths to Technology posts about these unplugged activities. (See the summary of coding-related posts for a list of these coding posts.) Coding concept activities transition to digital versions of these concept/logic games – often in the form of navigating through a digital maze. Mainstream digital mazes are very visual and typically lack accessibility features, making these fun games inaccessible to students who rely on a screen reader.

Like the mainstream games, CodeQuest is a digital maze; the player determines a route through the maze (grid) in order to move the astronaut to his rocket ship. Once the route is determined, the player moves the astronaut by step-by-step through the maze using arrow commands. Auditory clues (earcons) are associated with each arrow. (Examples: The right arrow makes a “ping” sound, while the down arrow makes a “descending tone” sound.) The individual sound is heard when the player selects the arrow; the player can choose the Read All button to review the sequence of the sounds he has chosen. The sounds are also heard when the player submits his route and the Astronaut moves through the maze. If an incorrect arrow is chosen, the astronaut will crash into the wall at that point of his route and is not able to continue.

General directions on how to play the game are under the “How to Play” button on CodeQuest’s Home screen. It is strongly recommended that you – the teacher – read through the directions first. Remember, this is a Beta version of CodeQuest and an interactive tutorial is not included with the game.

The mazes in the game have different grids and different layouts; however, the game itself retains the same general layout. The grid is at the top of the page and on the left half of the screen; at the top right is the current score and best performance. Below the grid is empty space; the amount of blank space varies depending on how many rows are in the grid. Below the grid and empty space is a section reserved for the arrow commands that the student selects to determine the astronaut’s path through the grid. At the bottom of the screen is the Tool Bar with the following buttons:

The screenshot below is the first grid: Planet Lagoona, Level 1. The grid is 1 row by 5 columns with the astronaut in row 1, column 1 and the rocket ship in row 1, column 5. The player has determined the route and has selected 4 right arrows.

To give you a general idea of how the game is played, the video below demonstrates the easiest level of the first planet.

Teaching Students with Visual Impairments How to Play the Game

Ideally, students with visual impairments have been exposed to tactile grids before playing this game. If the student is not familiar with tactile grids, it is strongly suggested to create a tactile grid that mirrors the first grid (1×5) in the game. Additional grids for the first few levels may also be beneficial. With the original development of the game, 3D printed manipulatives and game boards were created to accompany the grid. (View the CodeQuest 3D Manipulatives video in this post) Other options are to create tactile overlays (For details, see the Tactile Overlay post ), emboss corresponding grids on braille paper, or simply use a tactile line using Wikki Sticks or Rainbow Tape on paper or directly on the iPad.

UPDATE 1/7/20: APH has createdready-to emboss brf. files for the grids used in the first three levels of the first planet. Download the CodeQuest brf. files here! If you have access to a 3D printer and would like to print the tactile manipulatives, 3D printer files for the arrow tiles and characters are available below. Note: The grid boards files are designed for a laser cutter rather than the 2D printer. (These are the same manipulatives that are in the CodeQuest 3D Manipulatives video.)

Be sure to carefully listen to the information provided immediately after the grid page opens in the game. This information is used to help the player develop a mental map of the new grid and where the astronaut, rocket ship, and alien are located. If you want to hear that information again, select the Help button in the tool bar at the bottom of the page. It is also important to listen to the auditory arrow command clues, as the player selects an arrow command, listens to his selected route, or follows as the astronaut travels the given route.

It is critical that the student drag his finger slowly to explore the grid and to determine the path. The grid squares are slightly bigger than an adult’s finger tip, so their is minimal movement when dragging from one square to the next. Do not use a right swipe to explore the grid as swiping eliminates the advantage of knowing exactly where you are in space (Remember, only right and left swipes work to move when VoiceOver is running; up and down swipes change the rotor.) It is recommended to use a split tap and not a double tap when selecting a button.

The astronaut always starts in the top left corner. The student should first drag his finger to find the astronaut; once the astronaut is found, the only options are to move right or to move down. The new square will verbally state that the square is “empty” or “unbreakable wall” and then state the row and column number. The astronaut cannot go through the “unbreakable wall”. The student should mentally keep track of each step (direction and number of steps in that direction) as he moves to the rocket ship. Once the path is determined, go to the arrow commands and select the corresponding arrow commands.

The video below demonstrates the Level 2, Lagoona. Note: This video was made with the screen curtain on, meaning that the iPad’s screen is black, simulating how a student without vision can play the game.

CodeQuest games are progressive. Each planet introduces a new concept; there are three levels for each planet.

The CodeQuest app was carefully designed to be an accessible coding concept app AND to help students with visual impairments build mental maps (for math and O&M purposes) along with strong tech skills. When introducing students to CodeQuest, be sure to teach the game so that students will fully utilize this wonderful app!