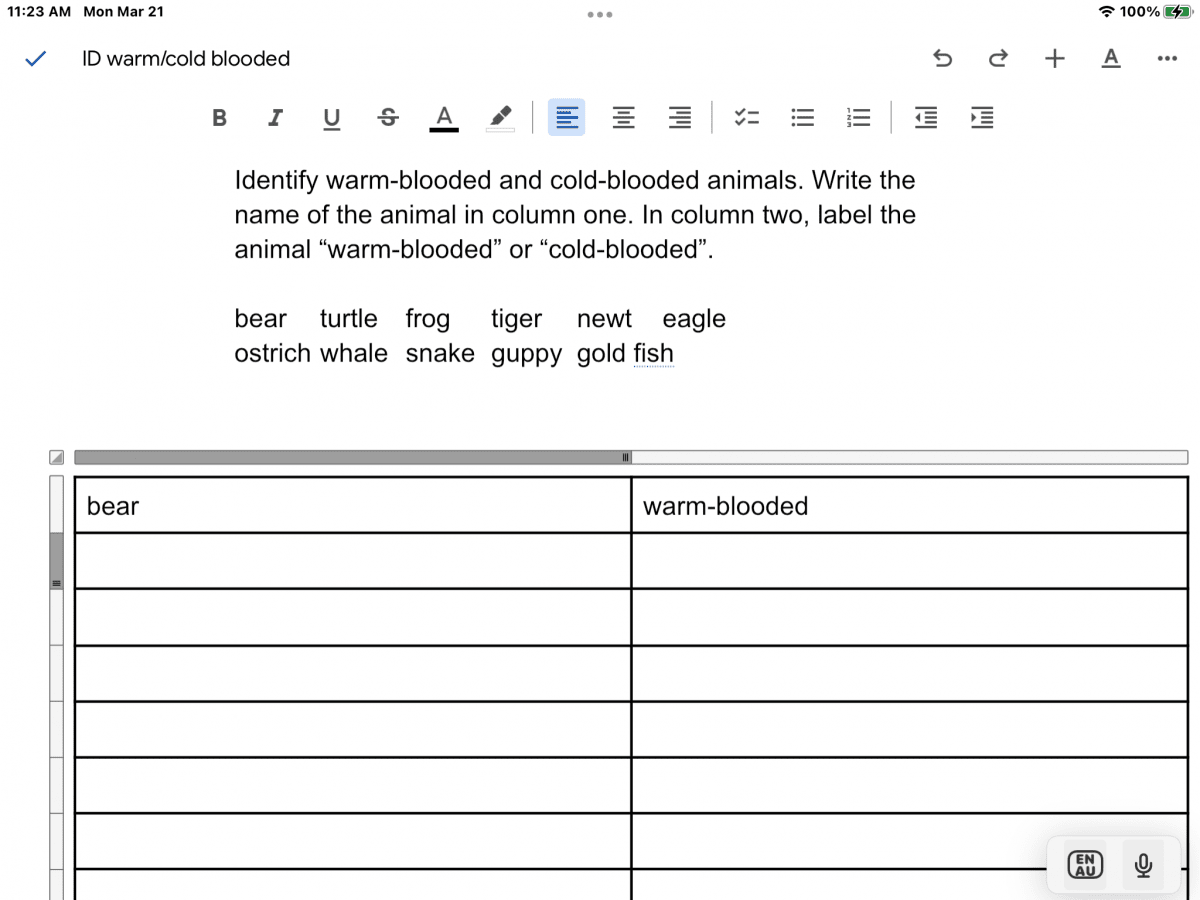 Tactile to Digital Part 4: Positions in a Table

This is the fourth post in a series of how to successfully teach 21st Century classroom skills by pairing tactile graphics with digital resources. In this post, we will discuss using a tactile overlay on the iPad to introduce the spatial layout of a table. In the first post, Tactile to Digital Part 1: Math Robot we discussed an overview of the critical tech concepts unique to students who are blind or low vision and how to use APH’s Math Robot app to teach these critical tech skills. Tactile to Digital Part 2: Math Melodies introduced the progression of using models, tactile graphics and iPad overlays to teach teach critical tech skills, including dragging in a straight line and applying grid concepts to the digital environment using the Math Melodies game, Add or Delete. Tactile to Digital Part 3: Creating a Tactile Overlay on the Go! shared two quick and easy methods to created simple tactile overlays without an embosser or PIAF/Swell graphics machine.

The iPad game used in this Part 4 activity is from the popular and fully accessible Math Melodies app; the specific game in the video tutorial is Absolute Positions. The table in the first grade base level of the game, has three rows (1-3) and three columns (A-C) with an animal randomly placed in the table. Ideally, students should have some previous experience with rows and columns before working with a table.

Often a student is able to drag his/her finger across a tactile line or across rows in a tactile graphic. However, when transitioning to a touch screen device, the student finds it challenging to drag in a straight line through space – without a tactile guide, his/her finger may move diagonally across the screen. Adding a tactile overlay provides the student with a tactile guide and auditory feedback, as VoiceOver announces the squares and information about the content in the square as the student drags his finger. The tactile overlays that have been created for Absolute Tables are designed to mirror the screen so that the boxes are the same size.

Another critical tech skill is the ability to systematically search. In the Absolute Positions game, the student should be encouraged to systematically search the table when seeking to find the animal.  Note: The student should carefully listen for VoiceOver to announce the size of the table. Example: “There is a table of three rows and three columns.” For a student with emerging tech skills, the student should drag his/her finger (not swipe!) starting in the top left area of the screen and move in a straight line across the screen. As soon as he finds the question, “Where is the fox?”  He should drag his finger down in a straight line. He will probably find either “Empty Cell” or “Column A”. If exploring the screen (initially using a table), he should then drag right to confirm that there are three columns (A, B, and C).Next, the student should drag back to the beginning of the row to the “Empty Cell”, then drag down to “Row 1”. Now drag right across row 1, listening for “Empty Cell” or the animal sound. As he/she drags, he/she should pay attention that there are 3 cells and think/say aloud “A, B, C” as he/she drags across the cells.

Note: If the student is a power tech user, after the initial exploration of the first table, he will take a short cut and simply start in the top left area of the screen and take a shortcut – dragging diagonally to find the “Empty Cell” in Row 1, Column 1. This power user might at the end of each row, drag left and slightly down to find the number of the next row. (Just like a good braille reader will automatically drag back to the beginning of the next row!)

When the student finds the animal, he/she should consciously remember which row he/she is in and which column (A, B, C). This student is paying attention to the spatial layout as he navigates around the table! If not, the student can drag up to find the column letter, then drag back to the animal. Now drag left to find the row number.

The four answer options are located at the bottom of the screen.

A big thank you to Transcribing Mariners who have donated the embossable graphics work for the Paths to Technology Resource Library and this blog post. A huge thank you to Jessica McDowell, TVI extraordinaire, for creating the PIAF/Swell graphics and for sharing her work on bridging the gap between tactile graphics and digital resources!