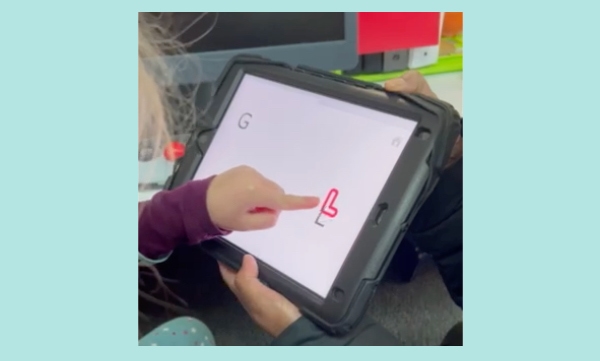 You are using apps with BLV students, but are you observing and analyzing your student's tech skills?

Students and teachers alike are “bubbling” with excitement about this new CVI literacy app! This much-talked about app is a free iPad app created by App Team Carolina. Let’s dive a little deeper into observing a student’s tech skills as she uses the Bubbly app.

Editor’s Note: The video below is of a CVI student using the Bubbly app and her TSVI, Anitha. I do not know the student or her current abilities. However, as an educator, I love observing students with tech and trying to analyze each student’s strengths and next steps. While watching this video, I encourage YOU to observe the student’s tech skills and to think about what might be next for this student!

In the video, the student is sitting in a chair and the TSVI is holding the iPad at a slant in the student’s lap.

Note: It is important that the iPad is in the student’s preferred position. Many CVI students do not see well in the lower field; having the iPad on a slant board or in a more upright position is often beneficial.

Set up for success

Before playing the game, the TSVI selected options specifically at her student’s level to ensure student success. These options included which letters would be used in the game, two answer choices, the size and color (red) for the bubble outline and the zone (amount of area around the letters that is acceptable).

To maintain the student’s privacy, the video intentionally did not include the student’s face. Therefore, it is not possible to observer the student’s eye gaze from this video. However, eye gaze is a critical piece of the CVI puzzle and should be taken into careful consideration when observing/evaluating a student!

In these two rounds of game play, the student initially started to drag her finger (before selecting the answer letter); she touched the screen and dragged starting on the left towards the lower portion of the screen. With only two rounds and two answer choices, it is not possible to draw conclusions about her accuracy or about whether she intentionally selected the initial letter each round. However, when she realized she was dragging the wrong letter, she dragged the letter back to the left side of the screen before releasing it. (She did not release the letter on the bubble letter to see if the letter was correct.) After the wrong letter was released, it appeared that she dragged her finger to the other letter, intentionally choosing the other answer letter.

Note: The TSVI did provide verbal feedback when the student chose the wrong answer.

It will certainly be interesting to see how this student does after a few more rounds of Bubbly!

This student was fully engaged with the Bubbly app! Physically she created an excellent drag gesture and knew when and how to drop the object being dragged. She understood – without prompting – that she needed to drag the letter from the left side of the screen and drop it on the bubble letter. With only two rounds (and two letter choices) it is not possible to determine if she knows the correct letter and if she can intentionally choose the correct letter; additional game play observations are needed. She also started her drag each time on the left side, lower portion of the screen. It cannot be determined from this video if that is coincidence, where she looks first, easiest place to reach, or ? (Note: the iPad was held up and out from her, so reaching higher on the screen might have been a big reach!)

The student did drag to the desired bubble letter but did not drag in a straight line. From this short video clip, it could not be determined why her drag tended to be in an arc (and even if this resolved itself after a few more rounds). There are different reasons for dragging in an arc: body/arm position, motor coordination, vision (does she have gaps in her vision or peripheral field loss, does her eyes jump from one area of the screen to another or smoothly track?) eye/hand coordination, awareness of what is a straight line/that straight line is most efficient, etc.

A next step might be to try to identify the reason behind dragging in an arc and work on dragging in a straight line.

The student did a terrific job with Bubbly, and I anticipate that this engaging app will support the student’s literacy skills!

I absolutely love student videos! As an educator, it is impossible to be fully engaged with the lesson and to observe every nuance. I confess that I did watch this video multiple times in order to pick up subtle pieces of information. Video taping a tech lesson is super helpful and using videos to build observations skills creates more observant educators – not to mention all the wonderful clues about the student that can be gleaned from these videos!

Please consider sharing YOUR student’s tech videos for others to observe! Let’s build our tech detective skills together!