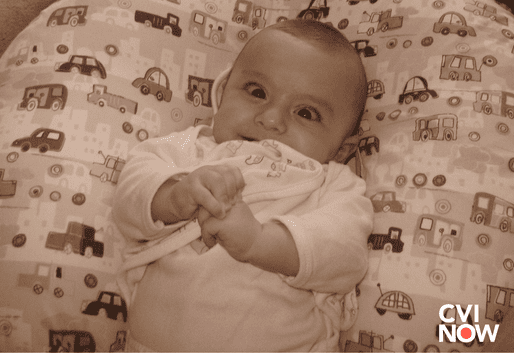 Sharing the News: Talking to Family and Friends About CVI

Tips about how to explain CVI and field all those awkward questions, the unwelcome stares, and unwanted commentary.

CVI adds an extra layer of complexity to that age-old dynamic. You might still be grappling with the diagnosis yourself when outsiders start asking questions about behavior or making assumptions about treatment. At the same time, relying on your inner circle for support is definitely important. What’s an overwhelmed parent to do?

Burju Sari, TVI and CVI Coordinator at the CVI Center at Perkins School for the Blind, has fielded all the awkward questions, endured all the unwelcome stares, and fended off plenty of commentary ever since her 12-year-old son, Omer, was diagnosed with CVI as a baby.

Happily, there have also been opportunities to educate people—and to empower Omer—along the way. Here’s her hard-won, real-life advice for explaining CVI to others, plus a few words of wisdom from your fellow CVI parents. You’re not alone.

Omer was seven months old when Sari began telling other people about CVI. “We were still processing, because it’s an uncommon diagnosis,” she says. It was initially hard to determine whether Omer’s symptoms—such as grumpiness and fatigue — were neurological, cognitive, or simple fussiness. CVI isn’t always straightforward. Take the time you need to come to terms with your own child’s situation before sharing with other people.

Omer often became upset in new environments, such as the grocery store or a restaurant. The family once went on a vacation to Cape Cod, where Omer cried through the night.

“There was only one restaurant that we could go to because it was so loud and that he could cry and blend in,” she remembers. “We couldn’t go out in public at all.”

People may roll their eyes. They may think you have a fussy or badly behaved kid. Call it by name: visual fatigue.

“There was too much clutter going on around Omer, and he couldn’t process all of this information,” she says.

Once you open up about CVI and its symptoms, such as visual fatigue, avoidant social gaze, or delayed visual response, people might try to ask more questions or offer advice. Some people might second-guess you or offer unsolicited opinions. Others might ask if your child really has CVI or suggest that they could outgrow it.

“My biggest advice would be: Do not try to convince them of anything. Just inform them. That was my biggest battle: You don’t have to validate your thoughts or your diagnosis,” Sari says.

Sometimes, a person truly might not grasp the realities of CVI, and there’s not much you can do to convince them. Instead of trying to change their mind, tell them how they can help your child. The grandma who believes CVI might just go away (remember: CVI is lifelong) can still help declutter a playroom or search for a favorite toy. A friend can still bring over a cup of coffee or drop off food, even if they don’t completely understand CVI’s nuances. Harness their curiosity about CVI into something productive.

Repeat: “This is my normal.”

Sometimes you have to leave a trip or even the playground. Sometimes an outing doesn’t go as planned. That’s true for most babies and toddlers, and it’s definitely true for kids with CVI.

“I know what helps Omer best. If I have to leave a space, that’s totally fine. If I need to cover him with a blanket to give him a sensory break, this is our normal. Looking back, I should never have let anyone look at me with judging eyes,” Sari says.

This isn’t easy! Over time, Sari has learned to say: “This is our normal. This is what I need to do. Thanks for your opinion.”

Sometimes you’ll be exhausted and just want to shut down comments (see above). But, if you’re in the right mood, you can use questions as an opening to educate.

“I think we have to give the message to the world, not just for CVI, that we have to respect different parenting strategies. Now I have the strength to say, if someone second-guesses me: “Do you want to ask me that again?”

Let other people help you spread the word.

Sometimes talking about CVI is tiring. Sometimes you’d rather just hang out with your family, go for a walk, or hide instead of making calls, sending emails or answering texts. Sari recommends appointing a few trusted friends or family members who can share your pre-approved message.

She also suggests making an “explainer video,” something she wishes she’d done with Omer, which can serve as a FAQ. At the end, she suggests asking people to send an email if they want to learn more. You can follow up when you’re ready. This way, you won’t be caught off-guard.

“Having to explain over and over again can be so painful, to go through everything and not knowing what people will ask,” she says.

As Omer got older and more verbal—and began making friends and meeting more people!—sometimes kids would ask him questions about CVI. Once, when visiting Turkey, people even approached him to say how sorry they were about his “injury” and that they hoped he got better soon. Other times, people would be overly kind and even condescending.

“Now Omer can say, ‘I’m fine. Nothing needs to get better. If you don’t accept me, then don’t hang out with me,’” she says.

Now Omer can say, ‘I’m fine. Nothing needs to get better. If you don’t accept me, then don’t hang out with me.’

Omer has found ways to take ownership of his CVI. For instance, he loves to show off his bike, and he plays wheelchair basketball. He also likes to swim. He made these activities into a video montage, which he showed to his class to pre-empt questions.

“I think that’s helped him explain to people: ‘This is my normal,’” she says.

With this confidence, he’s even been able to respond to people who might gawk or stare.

“In public, it’s annoying when people watch him all the time. He is very annoyed about it, if he notices it. I say, “Maybe you can go say something.”

Not long ago, the family was at an ice cream shop, and a woman and her daughter began staring. Omer became upset.

“I said, ‘Do you want to do something about this? I don’t want you to suppress this feeling. If you feel frustrated, go say it out loud. That’s how people will learn,’” Sari remembers.

“So he said, ‘Instead of staring, you could just say hello. I can talk!’ They were shocked. They said, “Oh! We were looking at how cool your wheelchair is!”  And he said, ‘A lot of people use wheelchairs? Thanks for the comment.’

“It was such an empowering moment for Omer. We even made shirts that say, ‘Don’t stare. Just say hi’ when we went on vacation,” Sari says.

Asked and answered! Helpful ways to explain your child’s CVI

Learn more tips on how to talk about CVI and find more examples of how to explain CVI to both adults and kids.