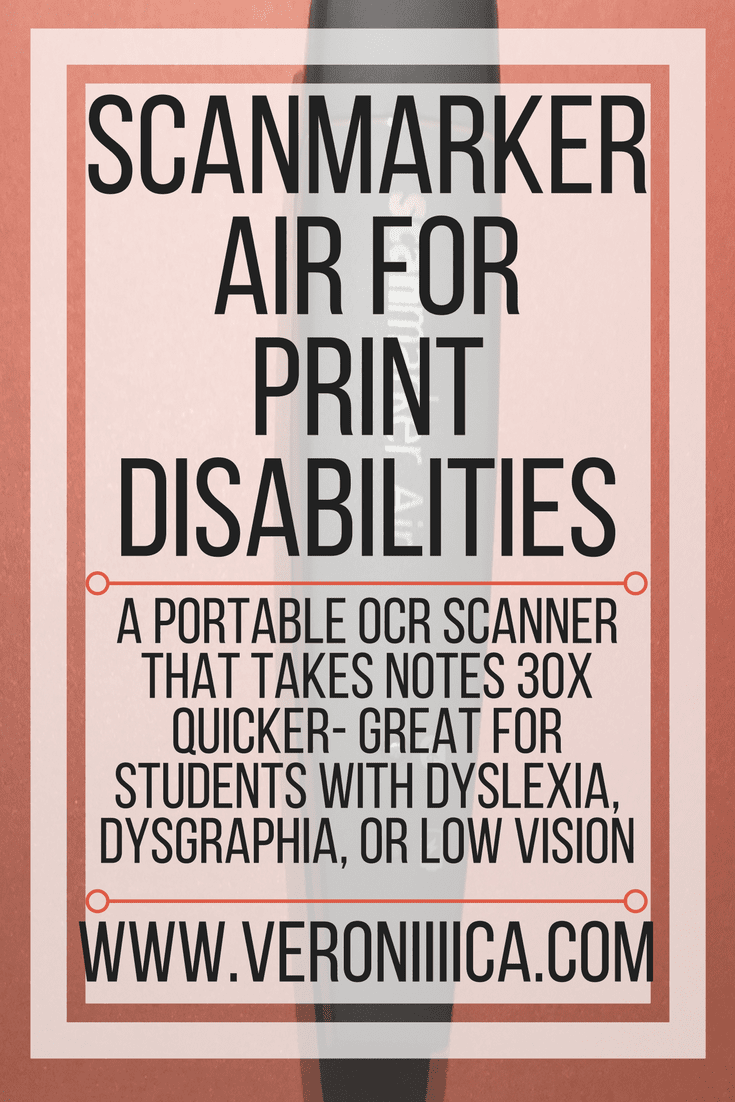 During my sophomore year of high school, teachers constantly were forgetting to enlarge my assignments (a little more on that here), leaving me to figure out how to make them accessible myself.  I normally would leave class to go ask a paraprofessional to enlarge the assignments, but I disliked missing class time.  Other solutions I came up with included having friends read me assignments, receiving items digitally whenever possible, and even bringing a portable scanner to school to scan in assignments myself (more on my print accommodations here).  Fast forward almost five years, and I have found a device that would have been perfect for me in school called the ScanMarker Air.  Here are some of my favorite features about it, and why I wish I had this in high school.

About the ScanMarker Air

The ScanMarker Air is a portable OCR scanner that allows the user to scan information directly into a word processing application, where it can then be shared anywhere.  The device can be used with either hand and does not require an internet connection, only a Bluetooth connected device.  There’s also an option to plug it into a microUSB cable.  It costs $99 and can be purchased from Amazon.

One of the things that blew me away about the device is how lightweight it is- only 60 grams!  I have had more than my fair share of bulky technology devices, so was pleasantly surprised to see how small this was.  No worries about it not fitting on a desk- or worse, falling off the desk.  Even if it does fall off the desk, it has a plastic outer shell which I have found to be very durable.  It feels very similar to a highlighter and does not hurt my wrist after prolonged use.

The device can be used with Windows and Mac computers, as well as iOS and Android products.  I appreciate the cross platform support, as I alternate between three different devices fairly frequently.  I tested this pen using a Windows 10 desktop computer, Windows 10 laptop, Android phone, and iPad, all with fantastic results (read more about my devices here).  The ScanMarker app must be downloaded before it can be used, and can be found on the app store, as well as the manufacturer website.

It can scan a lot of information, fast

Instead of waiting several minutes for a traditional scanner, an entire page of text can be scanned in about ninety seconds.  The device scans 3,000 characters a minute, or about one line every second.  It can scan in text from over thirty languages, as well as simple black and white images.  Font sizes must be between 6 pt and 24 pt.  I found that the device scanned in Chinese characters flawlessly, though when I tried scanning in handwriting, it was scanned in as a picture, and not editable text.  Sheet music for clarinet scanned in well, though some symbols were out of place.

While the pen itself does not talk, the ScanMarker apps allow text to be read out loud in real time, as the user scans information- just add headphones and the device can be used in the classroom without any distractions.  This is absolutely amazing for people who have print disabilities and have problems reading small font.  I tested this out by having it read text from a book, and while it didn’t always get punctuation correctly (a problem with OCR in general), I was able to easily understand the text.  This works best with sans serif fonts like Arial, but Times New Roman also worked well.

Is there a learning curve?

It took a bit of practice to scan in a straight line from a book, since I had to balance the book with my left hand and scan with my right.  Because of this, some of the punctuation looked a bit off and I cut off the last two letters of each line at first.  When I tried scanning in a worksheet that was sitting on my desk, I had much more success and very few, if any, errors.  It helps to practice gliding the pen in a straight line, checking to see that the line of text is inside the clear tip of the pen.  It took me probably fifteen minutes to master this.

Use it with other apps

The text can easily be shared within several different apps, such as Google Drive, Dropbox, OneDrive, Microsoft Word, OneNote, and more.  The user can also use copy and paste to have the text displayed in any app they want.  Alternatively, the user can store the text in the ScanMarker app, though the display text in the app is a bit small, so I prefer to copy and paste it somewhere else.

This may not seem like a benefit at first, since the ScanMarker Air must be used alongside another device.  However, having the pen scan information directly into another app, without storing information on the device itself, is actually a great feature.  This is part of why the device is so lightweight, but another benefit is that it is more likely to be approved as an accommodation for testing- whether it’s a test in the classroom, the SAT, the ACT, or a state standardized test.  This is considered a high-tech assistive technology device, for accommodations purposes.

According to the manufacturer, the device’s battery life is about a week with normal use.  I estimate this to be anywhere from 8-12 hours, meaning it can get through a school day without having to be charged again.  It did take five hours to charge the first time, but it can still be used when plugged into a computer charging, and Bluetooth seemed to work as well while it was charging.

How it can be used

There are so many ways the ScanMarker Air can be used both inside the classroom and outside of it!  Some examples are:

I would highly recommend this device to people with print disabilities such as low vision and dyslexia, as well as people with dysgraphia who may have trouble taking notes.  This is also great for people who frequently have to copy large amounts of information, or who need to quickly scan in documents.  I know my experiences in school would have been different if I had this device back then.