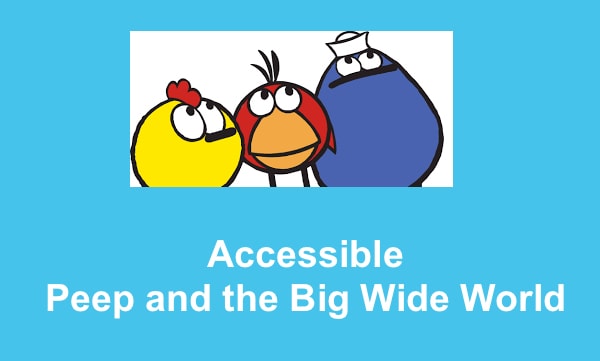 Here are accessible versions of the popular preschool Peep and the big Wide World games and videos!

Peep and the Big Wide World is popular animated children’s television series that revolves around the lives of Peep, Chirp and Quack. These whimsical characters discover, investigate and explore the world around them, introducing young children to science and math. The Diagram Center and WGBH’s National Center for Accessible Media partnered on the Peep Project – to make Peep resources accessible by adding audio descriptions to several videos and making two games that are keyboard navigable and accessible with a screen reader.

Note: The original Which Fish and House Hunt games are available in the App Store, Google Play and on the web. These versions are NOT accessible with a screen reader. The accessible version by the Diagram Center is a web game. You can play the game on a tablet by going to the Which Fish link or the House Hunt link.

This game is a pattern game: eight fish swim gently in a line forming a pattern. Students observe the pattern and select which fish, from a choice of three, completes the pattern. Note: The Diagram Center states that Which Fish is navigable by the keyboard alone and is accessible with a screen reader. However, when playing Which Fish as a web game on my iPad, the fish making the pattern were not announced. This means that a student who is unable to see the fish, could not determine the pattern in order to play the game. The answer choices were accessible with VoiceOver. When VoiceOver was on, after selecting the answer, instead of the game moving to the next pattern, the game broke, then reloaded the same, initial pattern. When VoiceOver was not running, the game automatically moved to the next pattern.

Accessible Which Fish video below:

House Hunt is a simple matching game with a twist: kids turn over pairs of leaves, not to find identical pictures, but to pair animals with their homes. The leaves are three rows with four leaves in each row. The screen reader announces the number of each leaf out of the total number of leaves. Example: 1 of 12. This announcement helps the student to associate a specific leaf with a specific location and a specific animal or home, enabling students to remember where a specific animal or home is located on the screen. When the student selects a leaf, the animal or home under the leaf is announced.

There are currently three animated Peep videos with video Descriptions: The Whatchamacallit, SnowDaze and Marble Mover.

SnowDaze video with video descriptions below:

There are three related Peep science/math videos with video descriptions: Ramp Rolling, Down They Go, and Homemade Hill.

View all 6 of the Peep videos with video descriptions available on YouTube.

Be sure to check out these Paths to Technology posts about Peep and the Big Wide World!