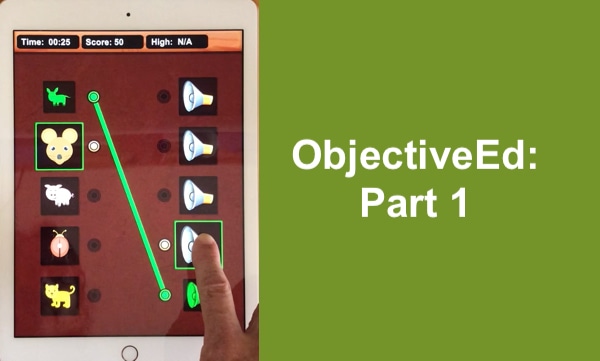 If you have attend a conference in the last year or so, you have probably met Marty Schultz, founder of the Blindfold apps and co-founder of ObjectiveEd. Marty has been actively seeking input from Teachers of the Visually Impaired (TVIs) and Orientation and Mobility Specialists (COMS) as he develops a series of games specifically to address the unique needs of students with visual impairments. ObjectiveEd (OED) combines motivating educational games paired with IEP goals along with powerful performance monitoring and reporting tools that empower TVIs and their students. No wonder there is such a buzz in the VI community about ObjectiveEd!

In this series, we will dive into the eight games that are currently available in the free version of ObjectiveEd, starting with Part 1, Speed Gesture and Sound Search games.

After selecting a game and hearing the directions for that game:

Note: Each level has an interactive tutorial on how to produce the new gesture(s) in that level.

The video below introduces the Objective Ed app and the Speed Gesture game.

The Twist and Shake commands are movements designed for iPhones, as a phone can easily – and safely – be held in one hand. However, students frequently have school-provided iPads. When using an iPad with students, I typically require my students to keep the iPad on the desk to minimize the risk of dropping the iPad. The Shake command is easy to perform; however, I struggled with the Twist command in this game when using an iPad. Honestly, I was not successful with the Twist command during the game play; although after numerous tries on the tutorial page, I was able to do the Twist one time. (I realize this might be a ‘user error’ problem!) For students to safely hold an iPad during game play requires two-hands. With Speed Gesture, it was awkward to transition from holding the iPad in two hands to perform the Shake and Twist movements and then switch to a one-handed hold for the basic taps and swipes. Caught up in the heat of the game, there is a strong possibility that the student may accidently drop the iPad.

FYI: I was happy to see the often-overlooked Scrub gesture included!

While the main goal of the game is to accurately produce VoiceOver gestures, Speed Gesture encourages a number of different goals, including:

The video below demonstrates the Sound Search matching game.

Note: There are an amazing number of sounds to identify; the animal sounds are fairly basic. However, some of the other categories have some unique sounds that a young student may not recognize. This is a great opportunity to teach the process of elimination. When there are five items on the left, the student can match the ones that he knows – which eliminates those answers. (When an correct answer is matched, dragging your finger over that matched sound will activate a chime sound and the speaker symbol will be green, alerting the student that the sound is no longer an option.)

These exciting games are motivating and educational! The games are addictive! Students with visual impairments have few options for quality accessible educational games. Students are having a ball playing these amazing games and are learning important skills through game play. Thank you, Marty Schultz, for seeking input from educators, creating exceptional games and for providing the free version for educators to take a sneak peak at ObjectiveEd games.

Stay tuned for a sneak peak at additional ObjectiveEd games!