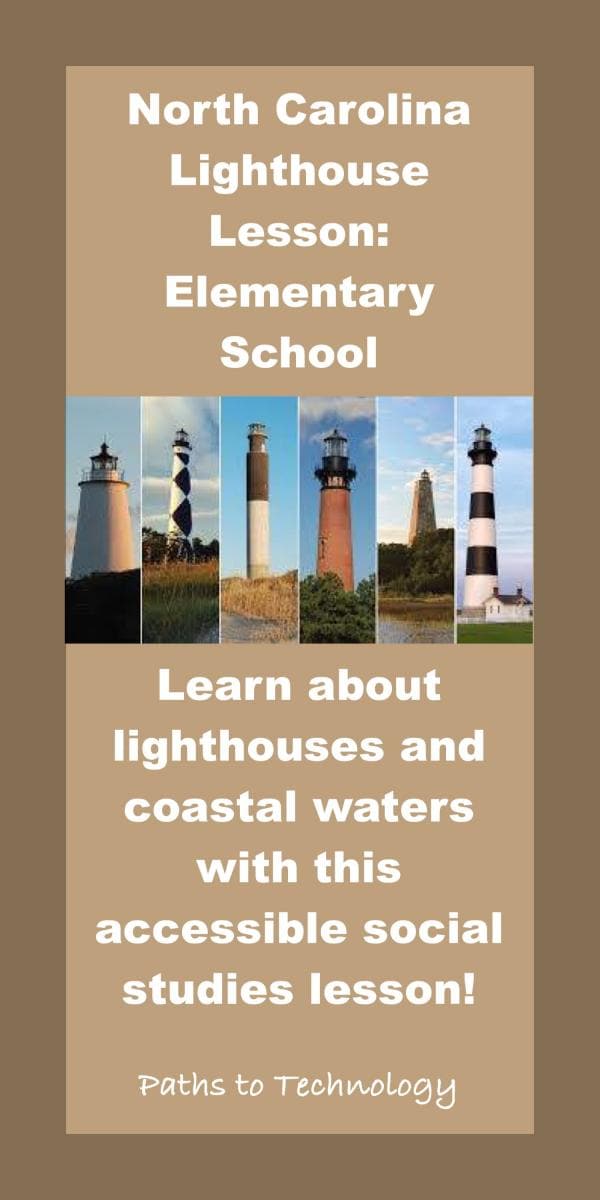 Learn about lighthouses with this book and map lesson!

Imagine that you are a captain of a ship sailing along the North Carolina coast. It is night and the ocean is rough. You know that land is nearby, but it is too dark to see anything. You also know that there are dangerous shoals and that the constantly shifting sand can move or fill in the previously safe channels. Your heart begins to pound along with the rain that is pounding your ship. “There!” a crew member excitedly shouts and points to a flickering light. The pulsating light – four quick white flashes one second apart, every ten seconds – tells you that you have found the Oak Island Lighthouse! This lighthouse will guide you to the Port of Wilmington, the destination for your cargo ship.

Note: It is important to understand the vocabulary to develop a good mental map from the names of areas on the map. Initially, a tactile map or raised line drawing may be beneficial to build the concept of these vocabulary words.

This is a social studies lesson geared for elementary students. TVIs can also use this lesson to teach IEP goals. In addition to the social studies goals, are you working on reading comprehension? Drawing conclusions? Tech skills? Determine the goals of this lesson and then ask questions that support these goals. Here are sample questions – these questions can be changed or modified according to your student’s grade or goals! It is important to remember facts; however, keep in mind that 21st century students should also use these facts to draw conclusions!

Explore the map and then answer the questions below. Remember, the map links open a traditional (visual) Google Map with customized labels, which can be used for students with vision. Select the Accelerate button in the bottom right corner of the Google Map to open the accessible non-visual digital map.

There are two versions of the NC Lighthouses Map. Choose the appropriate map for your student. If your student is new to using a non-visual digital map, start with the Basic map before moving to the Detailed map.

Remember, YOU can easily customize either of these maps to best fit your needs. Want more information, less information or different information? (Example: Change the label to include the height of each lighthouse instead of the light pattern. Then ask questions pertaining to height.)

If using the NC Lighthouses Basic map, ask simple questions, such as:

If using the NC Lighthouses Detailed map, your students should be able to draw more conclusions. Combine the knowledge from the book with the information from the map. Note: Some of these questions may be too challenging for early elementary students.

Read the story at the beginning of the post, simplify the vocabuarly words if necessary and use the NC Lighthouse Basic Map. If working with a group of students, choose 7 students and line them up by height. Have the tallest student be the tallest lighthouse (Cape Hatteras). Ask each student to mimic their lighthouse’s light pattern by making appropriate beeping sounds.

Ask a student to “act” out the history of a lighthouse as you talk about the history. Example: Cape Hatteras was originally shorter and had a dimmer light. Have the student kneel and beep the light pattern in a whisper voice. The lighthouse tower was extended and a new, brighter light was installed. (Stand and repeat the light pattern with a normal voice.) A new, taller  lighthouse was built (if possible, have a second student raise arms above his head). The sand erosion damged the lighthouse and the lighthouse was not used for 14 years. (Raise one foot and wobble. No light, so no beeping!) The lighthouse was lifted and moved (pick up student and move him back) and painted a black and white candy stripe. (Wrap student in a “candy-stripe” pattern with toilet paper.

Note: If all students have vision, substitute the beeping sounds with flashes on/off with a flashlight.