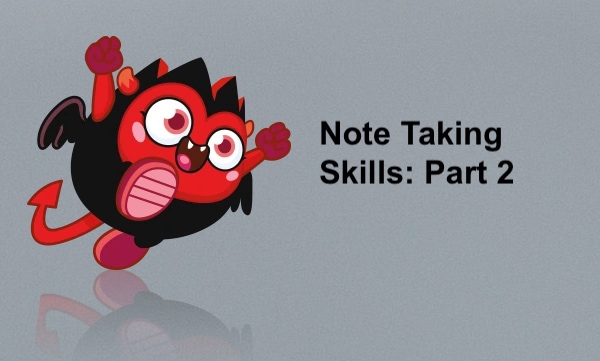 In the first Monster: Note Taking Skills post, we learned to make simple lists with a title/heading. Students listened to short descriptions of Lulu the Monster and jotted down notes that described Lulu. This post, Note Taking Skills Part 2, will use longer listening passages about another monster, Diavlo. Diavlo is one of several lovable Moshi Monster characters. The text about Diavlo is from the Moshi Monsters website.

Note: Students should take notes using their preferred device. If the student is not yet efficient with keyboarding, you can choose for the student to use the dictation feature; be sure to say “New Line” or “Enter” (depending on device) so that the notes are in list format. Students who are using a computer (vs. a tablet) should also learn to mark the title of the list as a Heading 2 using the Styles tab in the tool bar at the top of the document. This enables users who rely on a screen reader to quickly jump from one list to another using “Headings”. (See Creating Headings for a Screen Reader: Lesson Plan post)

With this activity, students will first listen to the description of Diavlo – without taking notes. Ask the students to build a picture of the character in his/her mind.

“Diavlo is a character bathed in red and black. He has gleaming and bulging white eyes, and has two small, pointed fangs. The top of his head resembles the summit of an active volcano, which seems to go fittingly well with his hot personality. He has two horns at each side of his head and has a small pair of dark flappy wings which protrude out of either side of his head. He wears two shoes drenched in a perfect red and has a tail – the end of his tail is spear-like, shaped like an arrow.”

Review making a list. What should the title/heading of this list about Diavlo be called? (Example: Diavlo’s Description). Now listen to the paragraph again and take notes (list style) on words that describe Diavlo. Remember, only write a word or short phrase per line. Use abbreviations. Eliminate extra words. Keep it simple!

Note: Read the paragraph again slowly so that students have time to take notes!

Discuss and review the list. If doing this with the class, ask students to share list items and write them on the board. Can any of the words be eliminated? Can any words be abbreviated? Can re-arranging the order of the phrase shorten the number of words without losing the information? Notes are meant to prompt your memory and should not have to include every descriptive word.

Remember, there is no ‘right or wrong’ way to take notes – as students progress, each student will figure out his/her own style. Here is one possible list:

This list should prompt the student to remember more. (Example: “2 Fangs” prompts the image of two tiny, sharp fangs.)

If desired, ask your student to draw Diavlo. (Students how are visually impaired can draw using a tactile graphic tool or can be given textures to make a tactile monster.)

Ask inferring questions, such as, “Do you think Diavlo is big or little?” What is his body shape? What is his personality?

Note: Diavlo’s description is not complete. He is basically a ball (no body, just big round head) with very small arms, gloved four fingers and either no legs or very short legs (only see his shoes). Create a tactile version of Diavlo and ask your student to describe what’s missing! Ask the students to listen carefully to the second Diavlo story.

Note: This story was changed slightly to be about a specific Diavlo character and not the Diavlo species.

“Mischievous, impatient and short-tempered, Diavlo is the Moshi Monster who blows his top when he’s angry or frustrated. This often leads to mayhem, as his head is an active volcano full of sizzly fizzly lava! Diavlo has a manic voice that gets screechier the angrier he becomes.

Diavlo is the perfect pet for a fiery owner- hot, bubbly and always wanting some affection.

Diavlo has a strong personality and is very proud and cheerful. He likes to shop and is very fond of his owner as well. When the owner tickles him a lot he starts to roll on the floor, laughing and giggling. After a while he gets annoyed and start to resist. He is one of the two monsters to fly; the other flying monster is Luvlis. When excited, Diavlo does a special dance, which is the moonwalk. Diavlo is always jumping and hopping.

If the owner annoys Diavlo, he turns to his side and shoves his arms out and makes a grunting noise. Sometimes he disappears from the screen when he gets really annoyed, and Diavlo might tell his owner to go away and that he doesn’t like him anymore. If the owner fed him a Scummi Bear, Diavlo would spit it out, stick his tongue out and go Arrrrghhh! (Scummi Bears are wiggly-jiggly little bears.)”

The first story described Diavlo’s appearance. After reading the second story, only discuss a possible title. (Do not discuss Diavlo’s personality characteristics, as the goal of this activity is for the student to pull out the pertinent information to take notes on.) What does this story describe? Decide on a title/heading for the next list. (Example: Diavlo’s Personality.)

When taking notes, be sure to include definitions that are given. (What word and it’s definition is given in this story?)

Read the second story again and have the students take notes. Want to know more about Moshi Monsters? Take notes on this quick paragraph (without reading the paragraph first).

“Designed for children ages 6 – 12, Moshi Monsters was a British online role-playing game. Players could adopt, care and nuture their very own monster in the virtual world of Moshi Monsters. Diavlo is one of six virtual pet monsters: Katsuma, Poppet, Furi, Zommer, and Luvli. The game was active from 2008 to 2019 with over 80 million registered users world-wide. Moshi Monster became a Nintendo game, multiple mobile apps, and a movie.”

Remember how many Moshi Monsters there are? Go back to your notes if you need to!

There are 6 Moshi Monsters. Practice makes perfect – repeat this note taking activity using another Moshi Monster. (Scroll to the bottom of the Moshi Monster website and select your monster. Descriptions, personalities and other details are available.) Have students take notes on at least one more Moshi Monster. Then quiz them about the characters – allow the student to go back to his/her notes to find the answers!

Ask your student to write a story about Diavlo. What kind of mischief can this little guy get in to? Your student can refer to the previous personality list and build a story around Diavlo’s characteristics. Use the Diavlo’s Description list for ideas: Why does Diavlo have tennis shoes? (because he is always running, jumping, moving?) What does he do with that spear-like tail?