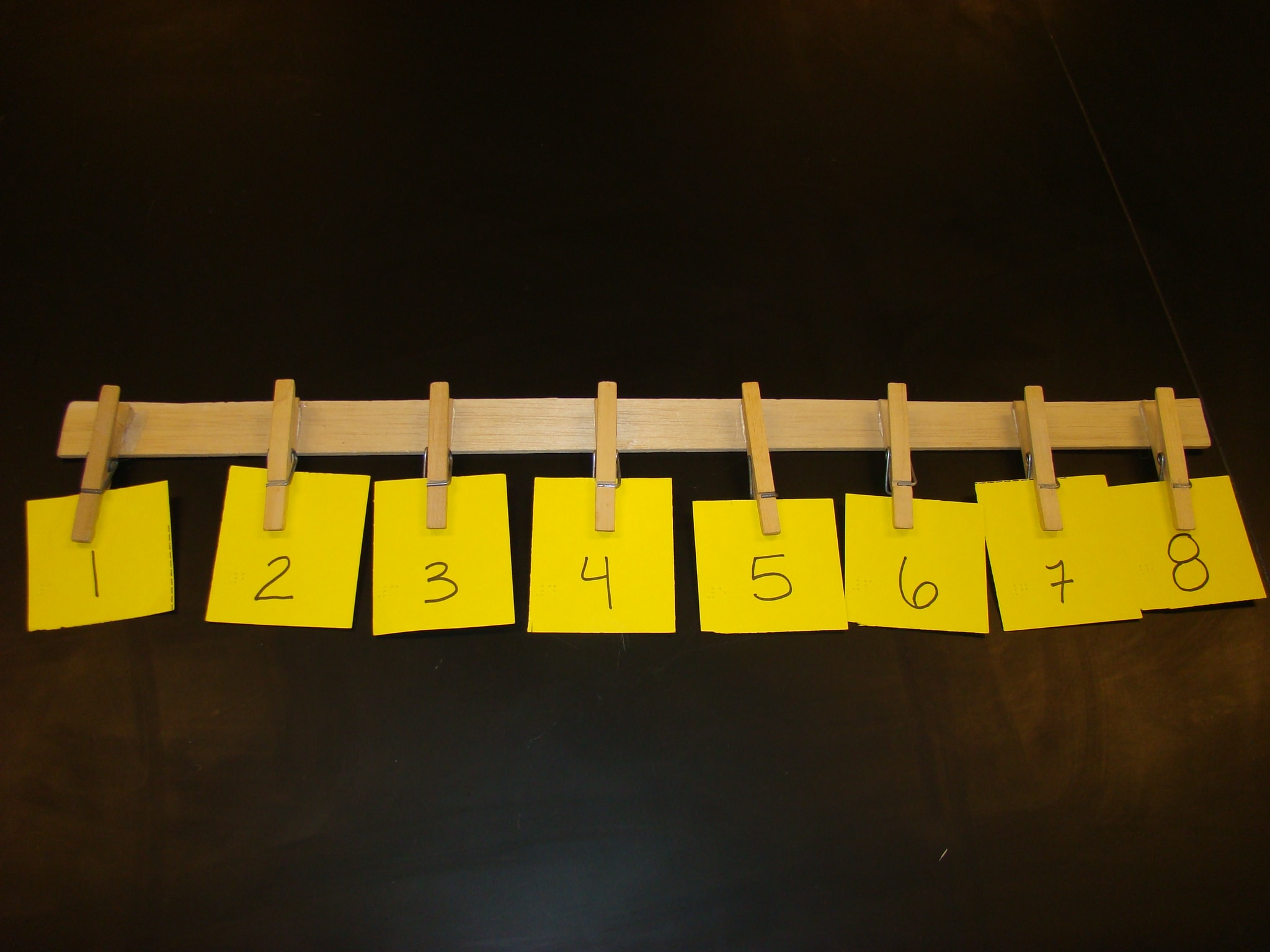 Activity adapted for students who are blind and visually impaired to get a better understand of chromosomal mutations.

Various types of mutations can occur in chromosomes.  These include mutations in which a portion is deleted, inverted, or duplicated.  In addition,  a portion of  one chromosome can be attached to a nonhomologous chromosome.   The following activity allows the student with a visual impairment to gain a clearer understanding of the manner in which this occurs.  This activity is adapted from the Holt Biology textbook that I have taught from for the past 7 years.

This model was designed by Adele Hauser.

1. Using the hot glue gun, glue the 8 clothespins to the thin flat piece of wood at regular intervals so that the clip portion of each clothespin  hangs off of the wood in the same direction.  The clothespins should open up and away from the wood.  (Refer to the picture).

2. If the student is a large print student, prepare cards as follows:

c. Repeat b and c to produce to sets of cards.

3. If the student is a braille student, prepare the cards as follows:

c. Repeat b and c  to produce two sets of identical cards.

As students of biology are taught about chromosomal mutations, this model can be introduced to solidify the concepts taught.

1. Give the model to the student with genes in order , 1-8 on the chromosome.

3. Tell students that this model is of a VERY small portion of a chromosome and that the numbers represent genes.

4. Have students model the 4 types of mutations by manipulating the note cards.  Only provide assistance as necessary.

If black on white is not a good color scheme for the student, the colors can, of course, be modified.  The picture of this model shows a black on yellow color scheme.

LS3.B: Variation of Traits
In sexual reproduction, chromosomes can sometimes swap sections during the process of meiosis (cell division), thereby creating new genetic combinations and thus more genetic variation. Although DNA replication is tightly regulated and remarkably accurate, errors do occur and result in mutations, which are also a source of genetic variation. Environmental factors can also cause mutations in genes, and viable mutations are inherited. (HS-LS3-2)

LS3.A: Inheritance of Traits – Genes are located in the chromosomes of cells, with each chromosome pair containing two variants of each of many distinct genes. Each distinct gene chiefly controls the production of specific proteins, which in turn affects the traits of the individual. Changes (mutations) to genes can result in changes to proteins, which can affect the structures and functions of the organism and thereby change traits. (MS-LS3-1)

Variations of inherited traits between parent and offspring arise from genetic differences that result from the subset of chromosomes (and therefore genes) inherited. (MS-LS3-2)

LS3.B: Variation of Traits
In sexually reproducing organisms, each parent contributes half of the genes acquired (at random) by the offspring. Individuals have two of each chromosome and hence two alleles of each gene, one acquired from each parent. These versions may be identical or may differ from each other. (MS-LS3-2)

In addition to variations that arise from sexual reproduction, genetic information can be altered because of mutations. Though rare, mutations may result in changes to the structure and function of proteins. Some changes are beneficial, others harmful, and some neutral to the organism. (MS-LS3-1)