Learn how to use the Compass app while running VoiceOver!

Find compass directions, see your latitude, longitude, and elevation, or match a slope, all with Compass from Apple.
Features

Image 1:The App Appearance on the iPhone (Enlarged) Opening the Compass APP in VoiceOver

Touch explore at the base to place focus on “Cooridinates”,
then “double tap” to open in Apple Maps.

The image below includes the compass app screenshot on the right and text with arrows pointing to the screenshot explaining different areas.

Direction the iPhone is pointing (arrow pointing to 235 degrees) Image below includes the text, “Apple Maps launched – Tap or double tap Navigation icon “Tracing button” to turn on Compass Mode, which will orient the map with magnetic north. App will announce nearby things, streets or search for Domino’s Pizza and being walking. (Hypothetical example; I have not tested out the accuracy of Apple Maps.) Leveling – Up or flat surface orientation 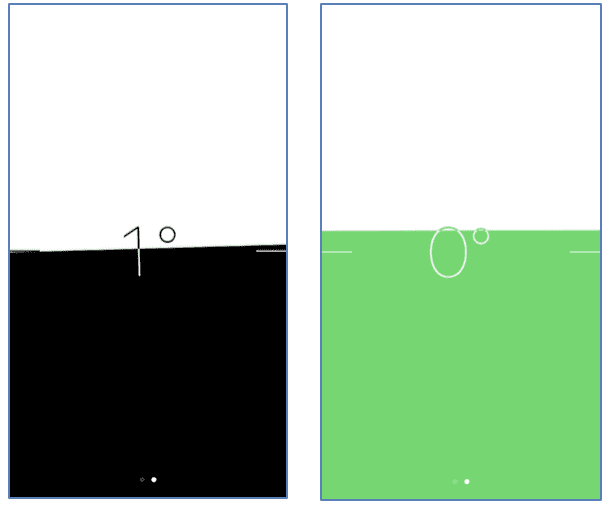 The first screenshot below has the text, “Copy an Angle. Tap or Double Tap to set the angle.”

The second screenshot below has the text, “Adjusting the angle till it reaches Zero Degrees.”

The horizontal image has a red bar that crosses and becomes wider at the top right. 8 Degrees is just to the right of the cross. Below the red is black space and above the red is white space.

The third screenshot below has the text, “Then manipulate the othr object to Zero Degrees.”