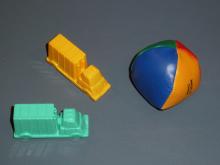 Use this activity for practice of finding similarities among objects and exact matches!

This activity has been revised and was originally created by Vickie Brennan, Flo Ryu, and Dennis Lolli and published in the Perkins Activity and Resource Guide (1st edition, 1992).  The second edition is available for purchase.

For students with some useable vision, the ability to match items such as socks or to group together items such as spoons can be practiced. This hands-on activity helps students develop identification of two like objects or pictures based on color, shape and size according to the following sequence:

Hint: This has practical applications when sorting and folding laundry, and matching socks.

GoTap Braille: An iPad App with the Framework for Teaching Braille