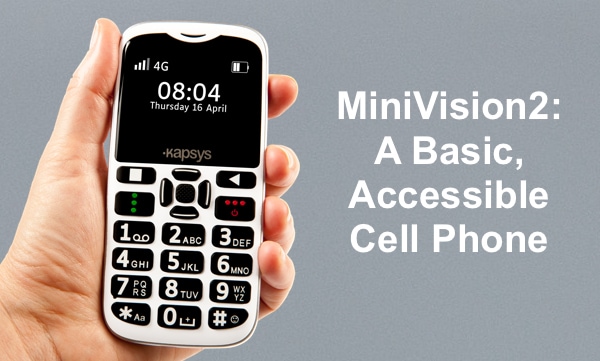 MiniVision2: A Simple Cell Phone for People who are Blind or Visually Impaired

An accessible cell phone with buttons for people who are blind or visually impaired.

The accessibility of the iPhone and Android devices is improving all the time and has become truly remarkable. On the other hand, the accessibility of basic mobile phones has lagged. There are very few basic cell phones with a physical keypad that are truly accessible.

Not everyone who is blind needs, wants or can afford an iPhone. Enter the MiniVision2.  MiniVision2 is designed to be an easy-to-use cell phone for people who are blind or visually impaired. Accessibility of MiniVision2 is achieved in three ways: (1) its physical features, (2) its voice guide, and (3) voice commands.

MiniVision2 has large buttons that are well spaced. There is a prominent bump on the five (5) key that allows users to orient themselves. The buttons that control the menu system, and used to initiate and terminate calls, are different shapes and have tactile cues to assist the user differentiate between them. For example, the Call button has three (3) vertical green bumps on it, while the end call button has three (3) horizontal red bumps on it. The different colors, shapes and tactile cues are thoughtful features for people with low vision. To further assist individuals with low vision, the keypad lights up when pressed.

The display is a reasonable size, and the brightness is adjustable. The display can be turned off for people who are blind in order to save battery power.

The top edge of the phone includes an LED light.

The back of MiniVision2 includes an SOS button that, if pressed, will call or send messages to up to ten (10) contacts. The back also has a speaker and a camera.

The back panel of the phone is removable, as is the battery. There is a SIM card slot and a slot for a micro SD card behind the battery.

MiniVision2 has a voice guide that converts MiniVision2 into a talking phone. This capability allows someone with no vision to use all features of the phone. There is nothing that a sighted user can do that someone who is blind cannot do. The voice guide speaks everything that is on the screen and all buttons that are pressed.

To ensure that the user always knows where they are in the menu system, when at the Home Screen the Voice Guide always says, “home screen” and speaks the time. It also always speaks the name of the menu when moving through the various menu items. When the charger is connected MiniVision2 says “charging started” and provides the battery level. When the charger is disconnected it says “charging stopped” and provides the battery level. When the screen goes to sleep, MiniVision2 says “screen off.” The Voice Guide can also provide all status information, such as the signal strength, battery level and WiFi connection information.  In short, someone who is blind has access to the same information as someone with sight.

The Voice Guide speaks more than twenty (20) languages, including English, Spanish, Portuguese and Turkish. The Voice Guide speed is adjustable, as is the volume which can be made quite loud.  The audio quality is very clear.

In addition to these basic voice commands, users can add contacts by voice, as well as create voice memos. Users can also open virtually any app by voice, which allows users to quickly access useful features, such as the calculator and the banknote recognizer. MiniVision2 recognizes voice commands consistently and accurately.

Phone calls can be made in four primary ways: (1) entering the digits one-by-one from the home screen. The Voice Guide speaks the digits as they are pressed. When a digit has been deleted, MiniVision2 will announce that it has been deleted. (2) The user can make a call from their contacts. Contact names will be spoken as the user scrolls through their contacts. When the user hears the name of the person they wish to call, they can press the Call button. (3) Calls can be placed directly from the Call History, which provides an option to dial missed calls and previously dialed numbers. (4) Users can dial by voice command by saying “call [name of contact].”

Users can access missed call information through the Call History menu. The Call History can be modified to list Missed Calls only. MiniVision2 will speak the name of the person who called (if the caller is in the contacts), as well as the date and time of the call.

The blind user can enter contacts independently. This can be done through either the buttons or voice commands.

The MiniVision2 has speaking caller ID and will either speak the name of the person who is calling or, if that person is not in contacts, will speak the phone number.

MiniVision2 makes it very easy to send and receive text messages. The Voice Guide reads incoming messages, and the user can compose messages either with the keypad or voice dictation. Text can be edited with ease. Also, as mentioned above, the user can send a message with the voice command, “send message to [the name of the contact].”

MiniVision2 has many other capabilities. It offers an alarm, calendar, camera, gallery, FM radio, light detector, color detector, banknote recognizer, calculator, voice recorder, notes, flashlight, weather, where am I? and an SOS button. All of these features are accessible and easy to use. For example, to use the “where and I?” feature, simply select that item from the menu and the phone will provide the address at which the user is located. No other steps are required. Similarly, to use the banknote recognizer, select the item in the menu, hover the phone about 10 inches from the bill, and the phone will speak and display the value of the bill.

The SOS button can be set up to call and send text messages to up to ten people in the event of an emergency. 911 can be set up as one of the ten (10) numbers.

MiniVision2 also has some thoughtful features for people who are low vision. As discussed above, the buttons are big, well-spaced and tactile. The display has good contrast and supports six different color schemes, such as white on black, black on white, yellow on black …etc.  The font size can be adjusted and be made very large. Text will scroll across the display.  Further, the most recently typed character is always displayed in extra-large font size. For example, when typing a phone number, the most recently typed digit is half-an-inch high.

MiniVision2 is unlocked and can operate on AT&T, T-Mobile or other wireless providers that operate on one of those networks. The phone requires data.  RAZ Mobility includes in the shipping box a free SIM card from MINT Mobile with three (3) months of free service. MINT Mobile rate plans are as low $15/month.

MiniVision2 is sold by RAZ Mobility and can be purchased on their website. Audio tutorials are also available.