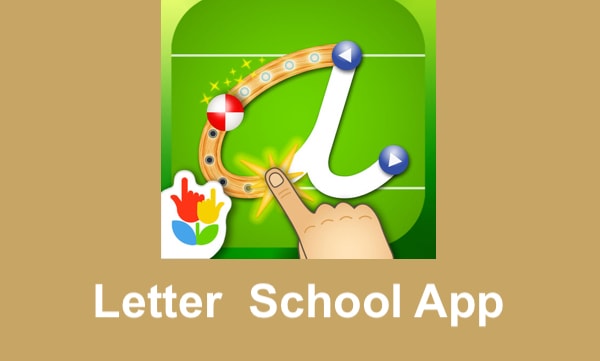 My students & I love the Letter School app – It is very engaging & kids can do it independently, don’t have to rely on adult prompting. Large letters/numbers with visual and audio cues & feedback. I prefer to use a stylus to help learn to grasp an implement from the start.

Level 1 shows letter and dots where to begin & end the strokes. If you touch wrong one, sound is a “dud” and does not let you continue. Choose right one, it shows how to form the 1st stroke. Continues til letter is formed. Can practice as much as needed. Visual & audio reinforcement varies with the letter.

Level 2 shows starting points & lines but student needs to execute the strokes. Gives cues if they can’t get it. New pic and sound reinforcement when this is done.

Settings let you choose up to 3 students, a typeface, upper, lower letters or numbers. Opening screen shows a star next to each letter you have completed. “Lite” version is free but whole alphabet not included. In-app purchase is $6.99 & well worth it. Download to your phone & can refine motor skills on smaller screen.