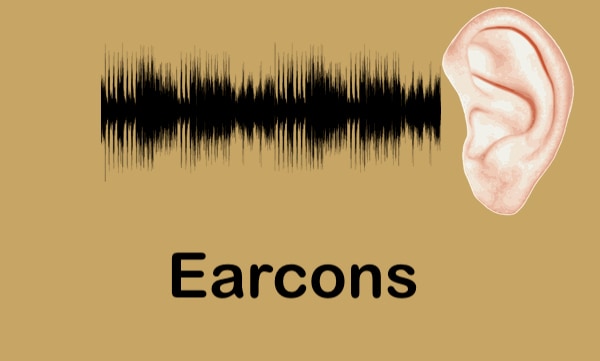 What are Earcons and how do you teach them?

iCons are visual symbols that represent information such as an app, an object (such as a file), or a function (such as the command to save). Users who are visually impaired, rely on screen readers to announce the information that is conveyed with an iCon. What does a gear symbol mean? A magnifying glass? an envelope? (Settings, Search, Mail).

Earcons are designated sounds which convey a specific event or item. You hear a soft ping and instantly pull out your phone to check your messages. Without the use of words, everyone automatically knows that the ping is the universal sound that means a new message has arrived. What other sounds does your tech use to convey information? What about the ‘whoosh’ sound or that alarming beep? (sent email, error message beep) How about the click when you type a character using the onscreen keyboard? Mainstream operating systems for computers, tablets and smart phones all use earcons. Most people recognize and use these earcons subconsciously, without knowing the term ‘earcon’ and without specific instruction about earcons.

Screen readers have additional earcons that play a crucial role for users who are visually impaired. These earcons alert the user to what is happening on the screen. Using a brief sound, earcons can provide detailed information in a very quick and subtle format. The earcon conveys this information without interfering with a screen reader announcement and is not impacted by the speech rate of the screen reader. Since Earcons should be introduced early – as the student is first being introduced to a screen reader – this post will focus on iOS VoiceOver earcons. However, the same principles apply to any device and screen reader.

Earcon volume can be adjusted. To unmute or raise the volume of earcons, go to:

Settings > Sounds > and under ringer and alerts – Change with Buttons. Toggle Change of Buttons On then increase the slider (move to the right).

Typically, 75% is used when teaching students to use earcons. Once the desired earcon volume is set, toggle of Change with Buttons. You can lower the earcon volume after the student becomes proficient with earcons, if desired. Change with Buttons will adjust the volume of all earcons – mainstream earcons such as a message alert as well as VoiceOver earcons.

Note: Earcon volume is different than the music volume, other app-related volume, and VoiceOver Volume.

If earcons are not heard, check that Mute Sound Effects is toggled Off. Turning this toggle On will mute earcon sounds.

On the Home screen with VoiceOver running, ask your student to initially mute VoiceOver in order to focus their attention on the earcons. Once the student becomes more aware of the earcons, unmute VoiceOver. Below is a list of earcons and the gesture used to make the earcon.

Note: Some of these sounds are challenging to describe with words! It might be easier to mimic the earcon when working with students!

The next video is auditory only. Listen to the earcons – can you identify what each sound represents?