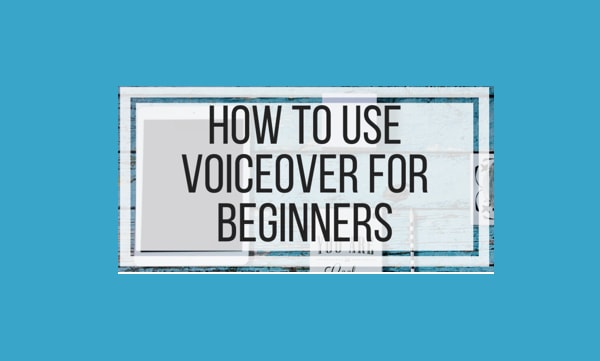 How to Use VoiceOver For Beginners

A beginner's guide to using VoiceOver, no prior technology skills or sight required.

When I started teaching myself how to use VoiceOver, I often got very frustrated at how much of a challenge it seemed to be. There were moments where I fantasized about throwing my iPad out the window because I couldn’t figure it out, and I consider myself to be very tech-savvy. It wasn’t until I sat down and talked to some of my blind friends that I finally learned how to use it, and now I feel confident with using VoiceOver whenever I am having a bad vision day or find certain material hard to read. Today, I will be sharing how to use VoiceOver for Beginners, with limited technology skills required.

VoiceOver is the screen reader built-in to Apple products, including iPad, iPhone, iPod Touch, iPod Shuffle and the Apple Watch. It is also available for Mac computers, but this post is geared towards learning VoiceOver on portable electronics. VoiceOver was first introduced in 2009 on the iPod Shuffle and iPhone 3GS and has been included on every Apple product since, with the exceptions of the iPod classic and iPod nano. It is free of charge and requires no additional downloads to use. Read more about selecting an iPad here.

How to activate VoiceOver

Follow these steps to activate VoiceOver on any device. Blind users will need to ask a sighted person for assistance, though devices purchased at the Apple Store can be activated after purchase.

VoiceOver can also be activated using Siri- more on that in a minute. Read more about other iPad accessibility settings for low vision here.

The voice in VoiceOver can be customized to user preference. Here are the settings that are available to adjust:

The voice used by default is Samantha, a female American voice. Users can choose between different male and female voices, as well as different accents from the UK, Ireland, Australia, and South Africa. Pitch can also be adjusted to make the voice higher or lower, but everyone I know keeps it at the default 50%.

Verbosity determines what information is read, such as punctuation, capital letters, embedded links, table headers, emojis, and similar. Users can choose to turn these settings on or off. Read more about emoji and vision impairment here.

Settings for VoiceOver can be backed up in iTunes in case of emergency. Read more about how my iPad died suddenly and how to create a backup here.

The screen curtain blacks out the screen, giving the user privacy so that sighted users can’t look at the screen. The screen appears to be off, though full functionality of the phone is still available. To activate the screen curtain, triple tap on the screen with three fingers, and triple tap again to turn it off. Speaking of privacy, read more about creating secure passwords here.

Typing with the keyboard

To type on the default keyboard with VoiceOver, users double-tap on the desired letter in order to type it out. Users can also select a random letter on the keyboard and swipe right or left until they get the letter they are looking for- as an example, if I typed a “S”, I could swipe to the right until I get to the letter “J.” Keyboard dictation is also available, so users can convert speech into text with ease. There are other keyboards available on the App Store as well that work with VoiceOver, though I don’t have any specific recommendations for keyboards at this time. Read more about making keyboards accessible here.

Read more about some of my favorite apps in my iPad/iOS tag here.

Siri is Apple’s voice assistant that pairs excellently with VoiceOver. Here are some of the things Siri can do, and how to ask for them:

This is just a snippet of all of the things Siri can do, but they are definitely the most useful functions.

It’s important to not be fully reliant on Siri, since the voice assistant only works on wifi or over cellular data connections, and can also drain the battery quickly. Practice finding apps, making phone calls, typing (or dictating) messages, and going through settings both manually and with Siri to ensure there are no interruptions.

It’s important to start learning technology skills as early as possible. This way, more time is spent using the device for learning, as opposed to learning the device and struggling to keep up with technology- read more about important tech skills to learn for transition here. By learning how to use VoiceOver, people with vision impairments such as blindness and low vision can be more independent and thrive in both educational and social environments.