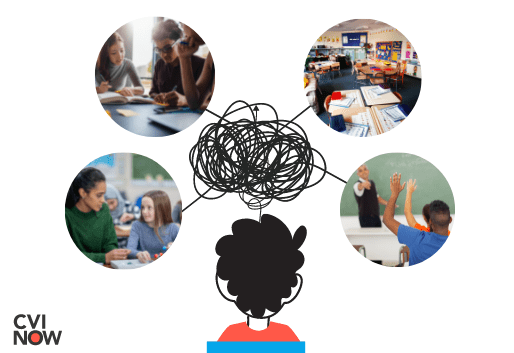 Learn why look and listen, sit still, group work, and over-designed spaces do not respect the accessibility needs of individuals with CVI, and ideas for inclusive practices.

Many individuals with CVI automatically adapt to their unique vision (their normal). When it comes to accessibility for and acceptance of a person with CVI, we must understand how their adaptive behaviors and compensatory strategies communicate their needs and brilliance.

When we think about behavioral expectations in school, community and family gatherings, or even just while out and about town, so much relies on visual access. We rely heavily on visual cues of body language and facial expressions when performing social norms.

With CVI, the visual world can be confusing, “warped and distorted,” and the root of immense social anxiety, especially living in a world with social norms inaccessible to individuals with CVI and so many others in the disabled community.

Zeroing in on school—the general social and behavioral expectations in schools are not disability-inclusive nor respect the neurodiversity of children with CVI. Individuals with CVI are on the blindness spectrum and tend to display key visual behaviors. It’s important to understand these visual behaviors before judging, labeling, or making false assumptions about a person with CVI.

Let’s dive into four social and environmental norms in a school setting, how they affect learners with CVI, and some ideas for CVI supports and strategies:

Eye contact and looking at someone while they talk are among the most common expectations to ensure the person is paying attention. Often educators use “look” statements to the whole class—”1,2,3 eyes on me,” “look at me when I’m speaking,” “eyes up, writing utensils down”—that reinforce how to pay attention.

For many individuals with CVI, to listen well means that they can’t look at a face or orient their body towards the person who is speaking. Many people with CVI have face blindness, difficulty looking at faces and facial recognition, and interpretation of facial expressions. The very act of attempting to make sense of a face means other sensory information is challenging to process. So if you ask a person with CVI to look at you, they most likely will not be able to process what you are saying. Now add in a visually cluttered and noisy classroom, and processing any sensory inputs can become extremely difficult and fatiguing. This applies to when a student with CVI is giving a presentation—looking out to a room full of people is a complex, inaccessible visual demand. Respect what access looks like for the person with CVI before labeling or punishing them for not looking and listening.

Prosopagnosia is not only the inability to recognize faces, it can also involve experiencing faces as twisted and contorted… trying to look at people made it impossible for me to pay attention to what they were saying. If I really wanted to hear them, I had to tune out visually.

Stillness is often used as a sign of attention and compliance in a classroom setting. Getting up without permission or any type of movement during a class lesson or during a conversation with peers can be misinterpreted as rude, hyperactive, or a behavior issue. But mounting research shows that movement activates the brain and enhances learning.

Some individuals with CVI can use their vision better when they are moving. Many CVI families report that their child needs movement to help recover from visual fatigue. Suppose an environment is too crowded or cluttered. In that case, the person with CVI may need to remove themselves before they become too tired or physically feel the adverse effects of anxiety and stress from the inaccessible environment. Some might go to the perimeter of a classroom or need a break in a quiet space.

People with CVI adapt naturally to their unique vision, so they may move around to make sure they can access something in their best visual field. Or they might move closer to see the material better (for some, moving closer means getting rid of the background clutter around that item). Movement like rocking, fidgeting, or tactually exploring an object or surface can be calming and anchoring. If a new object or inaccessible worksheet is presented, the person with CVI may put their head down, move away to avoid it by turning their head or walking away. Individuals with CVI have incredible compensatory strategies to survive in a world that is not visually accessible and can be downright scary.

Time on task can only happen in short 5-8 minute bursts, after that he needs a movement break.

I did a lot of writing on myself to learn how to write because feeling it on my body, and then feeling my hands moving is what helped me learn to write.

Engaging in groups and collaborative work is part of the learning experience at every grade level and every facet of life. Listening to others, taking turns, meeting and greeting, curiosity, and cooperation are some of the required skills for being an active member of a group.

Social learning primarily relies on visual information, such as attention to visual inputs (familiar and unfamiliar); recognition of people, places, and things; interpretation of facial expressions and body language; objects and targets in an environment; the visual curiosity of new things or something in the distance; imitation; and pop culture references and trends from television and movies. For an individual with CVI, social learning experiences are not fully accessible, and they require “intentionally designed opportunities intended to bridge the barriers to social inclusion that are heightened by the effects of CVI.” (Roman-Lantzy, 2019)

The act of finding and joining a group of peers can be problematic in the classroom and even more so in unstructured and unpredictable gatherings (recess, lunch, in the hallway between class, before and after school). Joining an existing group can be one of those most difficult skills to teach a child with a visual impairment. The student might not perceive a group if it is at a distance, so they are not even aware of the option of joining an existing group.

Individuals with CVI may miss visual cues that support collaborative learning, such as attention to a new item, transitioning between discussion topics, taking turns, or orienting to the project or play schema. Group work is often based on something that is visually shared, which can be difficult for a student with CVI to access, especially when surrounded by the noise and motion of peers. Then there’s body language that communicates interest (leaning forward), relaxed posture (chilling with friends), leaning on desks (informal conversation). Without full access to people and the environment, group work and social gatherings can trigger anxiety.

I missed social cues, I misinterpreted people’s reactions and I couldn’t always recognise the person that was talking to me… I often found it difficult to process what people were saying, especially if I was in a visually cluttered environment, or if there were too many people involved in the conversation.

In schools, there is this notion that a good learning environment means every inch of the walls and ceilings are covered in decorations, posters, and student work. Somehow we got to a shared understanding that a sparse classroom does not reflect well on the educator. This is simply not true. In the past decade, we’ve seen more research that shows cluttered and overly decorated classrooms “disrupt attention and learning” for most students in the class.

Visual clutter has a big impact on access for many individuals with CVI, disrupting the ability to use vision at all. An overly decorated classroom can mean that the student with CVI cannot use their unique visual and compensatory skills for learning. The visual clutter has already created an overload of visual demand on the CVI brain and now add in the noise and distracting movement and light sources, and the individual with CVI can become fatigued, anxious, stressed, confused, and completely overwhelmed. Locating people or items is near impossible. Even a patterned carpet can make the floor seem like it’s moving. Some individuals with CVI have a drastically reduced visual field in the presence of clutter and cannot control where they are looking. The more visual information a person with CVI needs to process, the more warped and distorted the visual world can appear.

In her blog post, “The war on cluttered classrooms,” Nicola McDowell wrote: “As a teenager, I didn’t have much control over many of the environments that I spent time in, including my classrooms at school. This meant that the majority of my day was spent in an environment that was visually cluttered with pictures, artwork and posters plastered all over the walls, covering the windows and at times, hanging from the ceiling. This clutter, combined with the overload of other sensory information, such as the constant noise, movement and smells of a classroom full of students, meant that I spent the whole school day feeling anxious and on edge.”

As always, behavior is communication. The more understanding of CVI, the more we can understand why people with CVI do what they do and fully see their capability. It’s time we reflect on why we uphold certain norms even when it causes anxiety and barriers for people with CVI and many in the disabled community. For all who work with and care for individuals with CVI, what are some ways to implement inclusive norms and expectations? How can we weave these into the fabric of our schools and communities? Let’s get to work!

A multisensory approach for children with CVI