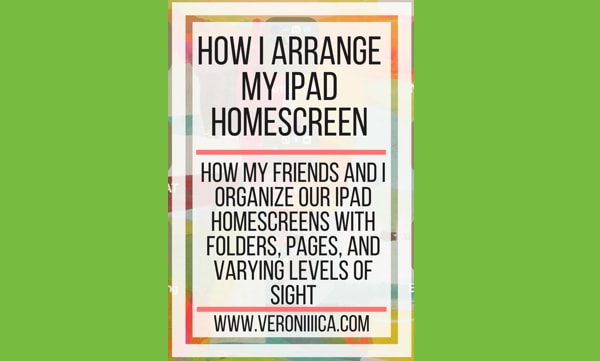 How I arrange my iPad Homescreen

How my friends and I organize our iPad home screens with folders, pages and varying levels of sight.

The other day, my friend and I were talking about our favorite apps on our iPads, which led to another discussion about how I arrange my iPad homescreen so that it isn’t overwhelming for someone with a vision impairment. My friend, who also has low vision, said that they organize their iPad apps completely differently than I do, so I decided to ask some of my other friends with low vision and blindness how they personally organize their iPad. Today, I will be sharing how I arrange iPad apps so that I can find my favorite apps easily.

First, folders or no folders?

I personally love using folders to organize my iPad apps. The moment I download a new app, I add it to a folder because I don’t like having to swipe across several screens to figure out what I need. I would rather have a dozen folders than have a dozen pages of apps. Besides, folders can have an unlimited amount of apps inside of them, and I like being able to have the apps I want to access in the center of the screen.

My friend on the other hand said that they don’t like that they can’t tell what is inside their app folders because the text is so small, and they didn’t want to memorize where every single folder was located on their iPad. Instead, they organize pages of apps so they can see all of their apps without having to tap on additional icons.

Even though we have different preferences for using folders, there are still many options for how we can choose to organize our apps.

How to rearrange apps on iPad

To rearrange apps on the iPad:

How to create folders on iPad

A note on VoiceOver

A couple of my friends reported that it’s difficult to rearrange apps with VoiceOver, and have asked me to rearrange apps for them instead. I still ask them to write down how they want their apps organized, and VoiceOver reads and navigates the folders well.

Every app on my iPad is organized into a folder, with the exception of the apps on my dock. I have 15 folders total, which takes up one page on my homescreen. Each folder has at least eight apps, and most have much more than that.

I chose to arrange my folders by subject, or in a few cases by the developer of the app.

When my friend P got an iPad, they told me that they typically use multiple apps for completing different activities such as doing homework, shopping, apartment hunting, cooking, or using social media.

P felt overwhelmed having their icons spread out across several pages, so we grouped their apps based on activity types so that they could easily find it. P feels comfortable putting their face close to the screen to see folder labels and contents.

There are 12 folders on P’s iPad, some of which include:

My friend Z uses their iPad primarily for school, and they are currently taking a large variety of classes, primarily in the science discipline. They find it frustrating to have several pages of apps since they hold the iPad close to their face, so instead decided to put the apps in folders so it would be less frustrating.

Z was telling me that they kept opening the wrong folder because it was difficult for them to see the text labels. One of the things that helped solve this was using emoji for their folder labels so they could distinguish folders based on the color or shape of the emoji.

Instead of using actual emoji, I will just list the emoji name. Z has a total of 15 folders, some of which include:

Organizing apps by most used

M loves to use their iPad for school and entertainment purposes. They haven’t had an iPad for very long but typically use it when they are in their dorm room and not as often in the classroom.

M does not like having to hold their face close to the screen to read folder labels, so instead sorts their apps based on usage or general categories of apps. M also uses an inverted display and said that they had greater difficulty seeing folders.

Pages throughout the day

L has no usable vision and was telling me how frustrated they were about their iPad apps being arranged by when they had downloaded them. As a VoiceOver user, they frequently use Siri to open apps, but they also like to be able to find the app on their own if they do not have wifi at the moment.

L personally isn’t a fan of using folders because they want to open an app with as few gestures as possible. When I helped them figure out how to arrange iPad for a screen reader user like them, we decided to use pages and organize their apps based on the time of day that they use them.

Everyone has their own preferences for how they want their iPad to be organized, so I recommend trying out a few different layouts before committing to one that you like best. Also, never re-arrange someone’s iPad without permission, because this can cause a lot of confusion and frustration. I hope this post is helpful for learning how to organize iPad apps and folders!