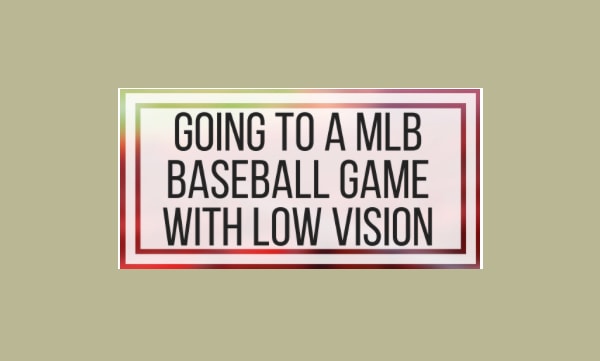 Going to a MLB baseball game with low vision

Play Ball! How to use assistive technology to watch MLB baseball games with vision impairment.

When I went to St Louis, I had the opportunity to attend a St Louis Cardinals MLB baseball game on one of the nights while I was there. While the weather was incredibly hot, it was really cool to see all of the different ways that people with vision impairments can use assistive technology to enjoy the game. As part of my summer fun series, today I will be sharing how people with vision impairments can watch a MLB baseball game.

I went to this baseball game as part of a social event with other blind and visually impaired people and had no idea what to expect going in. I do not regularly watch baseball, and have only watched a handful of baseball games played by a local college. As a result, I will not be using a lot of baseball terminology in this post, and instead will just be sharing technology resources that helped me to understand the game, since I know far more about assistive technology than I know about baseball. Read more about why I study assistive technology here.

Getting to our seats

Because there was a larger than normal group of visually impaired people, staff escorted us to our seats and through a series of crowded rooms. Staff were more than willing to help us and made sure that we all made it to our seats and were comfortable. One thing I wish I did was grab some water before we all sat down, since it is confusing to navigate the stairs of the stadium and I ended up sitting in one place for the entire game.

The view from my seat

From my seat, the baseball diamond sat at the far left side, and I sat on the second tier of seats. Since there were no obstacles, I was able to use my technology with ease and not have to worry about items obscuring my view. Another interesting part about where I was sitting is that I had an off-harness guide dog next to me who was trying to beat the heat, so I gave them ice cubes from a cup. I made sure to get permission from the owner first and asked for additional permission to take a selfie with the dog sitting next to me, since asking permission beforehand is recommended etiquette for interacting with a guide dog. Read more about interacting with service dogs here. One of the things that helped me the most was understanding audio cues in the stadium. Specific tunes and riffs on the organ helped to signal when the next inning was starting, which team was at bat, and whether someone had scored. Verbal information about the game was not announced over the stadium intercom, so I had to use other ways to get audio description, which is described in the second half of this post. Read more about audio description here.

What I brought with me

When going to the game, I brought my purse that had my favorite portable electronic devices with me, including my iPad and my Android phone. I also brought my Aira glasses with me- more on those in a minute. Besides technology, I also brought a pair of sunglasses and sunscreen with me because of the heat advisory. I ended up wearing my sunglasses all night because the stadium lights seemed very bright to me. It’s worth noting that I am pretty sensitive to bright light and wear tinted glasses all of the time- read more about tinted glasses here.

A lot of the people I interacted with that had blindness or low vision at the game brought their own radios with them to the game. This was so that they could tune in to local stations and hear descriptions from announcers more clearly. While some people used headphones, most just held the radio speakers next to their ear and used that. While I can’t recommend a specific radio to use, a small battery powered one is perfect for events like this.

For one of the innings, I used my Aira smart glasses and had one of the agents describe what was going on to me on the field. Some examples of descriptions include which pitcher was throwing, what angle they were standing at, and the layout of the baseball diamond. While I decided to test out other assistive technology solutions instead of using Aira the whole time, I found it to be a good way to get description. Read more about Aira here.

TuneIn Radio is an online service that allows users with premium subscriptions to listen to live coverage of the game. I signed up for a free trial and was impressed with the audio quality, though found that it ran at a bit of a delay because the stadium had slow wifi and I couldn’t figure out how to modify the audio streaming quality at the time. Just double-check to make sure you are listening to the live game and not a previous recording from before. Download the TuneIn app for iOS on the App Store here and TuneIn app for Android on Google Play here.

Many local radio websites allow listeners to tune in live for free, and this can be a great way to listen to the same stations as the people using handheld radios. It took some digging around to confirm which stations were doing live coverage of the game, but this is a simple solution for people who may not want to download additional apps or make an account, but still want to use a smart device such as a phone or tablet. Find out which radio stations broadcast for your team by running a web search for the team name followed by the phrase “live radio coverage.” And speaking of websites, read more about factors that make websites accessible here.

Using the MLB At Bat app

The most interesting way to watch a MLB game for me was to use the MLB At Bat app that combined radio broadcasts with interesting visuals. Using Zoom on my iPad, I was able to not only listen along in the game but see how fast a particular ball was thrown, read fun facts about players, and figure out who was where at what time. The app requires a $2.99 monthly subscription, though I tested it using a free trial like I did with TuneIn. I did not test this app with VoiceOver, but found Select-to-Speak screen reader on Android works well with the app. Download the MLB At Bat app for iOS on the App Store here and MLB AtBat for Android on Google Play here. 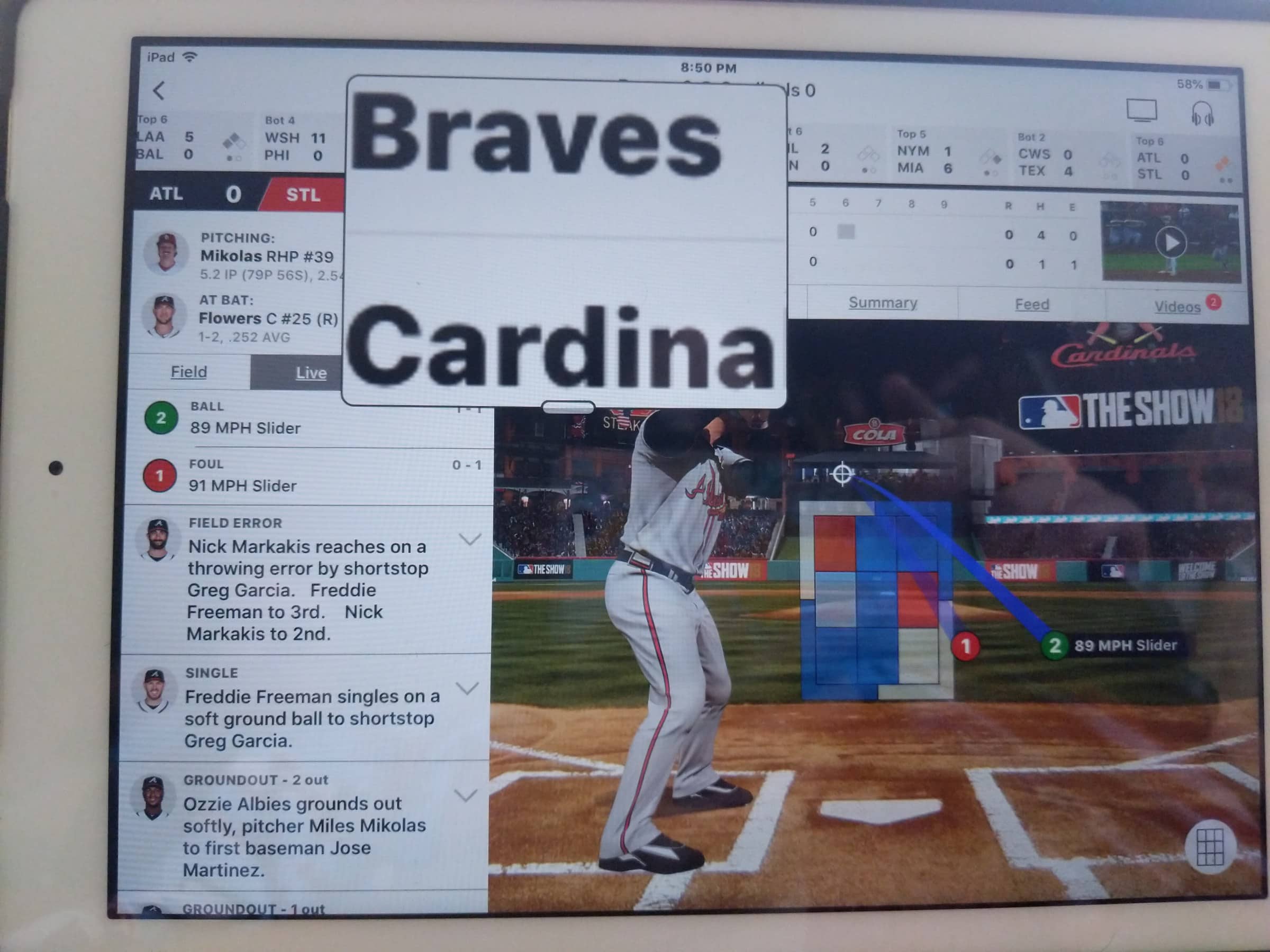 Attending a MLB baseball game was a very interesting experience and taught me a lot about different ways to receive audio description for a game. So go ahead and go out to the ball game with vision impairment, it will be a memorable experience for sure.

What is this O&M? Parent perspective video