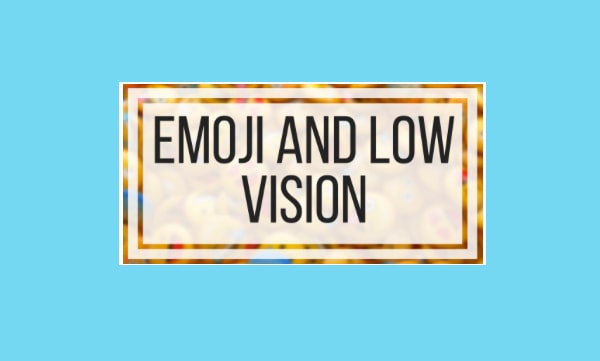 In honor of World Emoji day 2018, learn about how people with vision impairments type and read emoji.

Emoji are everywhere. They are in my text conversations, labels for folders, social media applications, and sometimes even show up on the TV. It can be challenging for me to use emoji at times due to my low vision, since I can’t always see the smaller or more intricate designs, though I have learned a lot about emoji accessibility and using emoji with visual impairments. In honor of World Emoji Day, here are my tips for using emoji with low vision, and how to make emoji accessible for low vision and blind users.

What is an emoji?

An emoji (pronounced e-moh-gee) is “a small digital image or icon to express an idea, emotion, etc., in electronic communication.” While they have been around since 1998, they have become extremely popular in this last decade. Emoji can easily be found on social media, in text messages, and even in advertisements. Some common examples of emoji include a smiley face, face with heart eyes, fire, and airplane. There are over 1800 different emoji available with new additions every few months.

Each emoji has its own unique meaning, with some meanings that may not be so obvious. Whenever I am confused as to why a certain emoji was included in a text, I run a web search with the emoji followed by the phrase “definition” or “use.” I have found that the website Emojipedia is accessible with screen readers and filled with lots of helpful information.

Since this post is for World Emoji Day, I’ve decided to list some of my favorite emoji for fun, along with their meanings

•   I like using the purple heart because it looks unlike any of the other emoji colors so I can distinguish it easily, and purple is my favorite color because it is the color for migraine and Chiari Malformation awareness.)

•    Since I wear tinted glasses, I jokingly say this sunglasses emoji describes me perfectly

•    I like the tiger emoji because tigers are my favorite animal. Not all emoji preferences have in depth reasons as to why they are awesome.

How emoji show up with screen readers

Many people with blindness and low vision use screen readers or text-to-speech to interpret information on the screen. When reading a message with an emoji, a description of the emoji is read out loud.

If my friend sends me a message with a yellow heart at the end, my screen reader would read the message and identify the emoji as “yellow heart.”

This also applies for Twitter usernames. If someone has a bunch of emoji in their name, the screen reader will read all of it.

What emoji look like to me with low vision

Sometimes I use screen magnifiers or large print in order to read emojis instead of a screen reader because of one reason or another. While emojis are often high quality images, I can have difficulty distinguishing which emoji is which without the assistance of assistive technology, which has led to me sending several random emoji that make no sense. If someone sends me a bunch of different emoji that are the same color, I may have trouble distinguishing which is which with my eyes alone, so often times I turn on the screen reader or ask my friend what they just sent me. While I can handle emoji in small amounts, having an entire text with them is not good for me, and can be disorienting with double vision.

There are a few different options for typing emoji that are easier for people with low vision than using the traditional emoji keyboard:

Emoticons are interchangeable with emoji. When most people think of emoticons, they think of symbols such as  being a smiley face. Many screen readers read that smiley face as “colon right parenthesis” if a user has not customized their screen reader’s pronunciation dictionary. If I am using a screen reader, it is easier to receive and understand an emoji than for an emoticon. If I am not using my screen reader and instead just using large print, I can read emoticons the same way I read other text, as they display in large print.

Should I avoid texting my blind/low vision friends emoji?

Unless your friend has explicitly stated otherwise, it is perfectly fine to text them emoji, but as mentioned, typing several in a row may be annoying. Also avoid putting emoji in the middle of words, as this will affect how messages are read by screen readers- a great example of how this sounds would be how singer Kesha’s stage name was pronounced Key-dollar-sign-ha since the “S” in her name was replaced with a “$.”