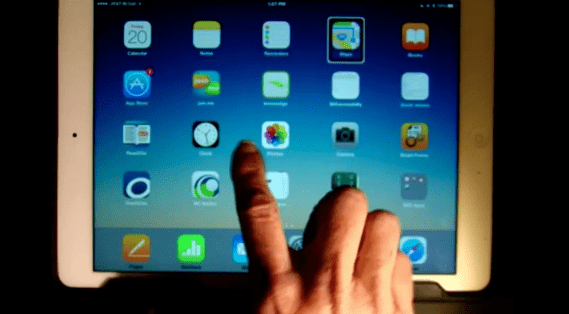 Getting Started with VoiceOver on the iPad

A systematic and effective approach on how to teach VoiceOver on the iPad to students with blindness or low vision.

Your student has an iPad – now what? This article provides a systematic and effective approach on how to teach VoiceOver on the iPad to students with blindness or low vision (BLV).

The iPad is intended to be a personal device – used by one person. The iPad has a variety of settings to maximize the individual user’s success. Each person can customize his/her iPad by choosing a unique combination of settings that best suits his/her individual needs. The majority of accessibility options can be viewed and changed in the Settings app under General > Accessibility. However, be sure to review all options in the Settings app. There are many options for students with low vision and additional options for students who are blind.

To maximize success, systematically teach BLV students to explore and understand the spatial layout of each app, the app’s options in the Tool bar and the VoiceOver navigation commands. These three skills will enable students to independently learn new apps and to easily adjust to software updates and changes. Many students initially need specific instruction on hand positioning, using a gentle tap – especially students who are used to pounding on the Perkins Brailler, the speed of their movements and the specific motions required to produce gestures that VoiceOver can interpret correctly.  Once a student understands the spatial layout of the Home screen or app, there are simple navigation commands that will jump the VoiceOver focus to a specific area, such as jumping to the first or last element on the screen (top left corner or bottom right corner).

When in landscape mode, most apps have either a full screen layout like the Pages app or a one-third, two-thirds layout like the Mail app. Be sure to specifically teach the student to identify the general layout of every app.

Note: Due to the smaller screen size, the iPhone is always a full screen layout; the iPhone should not have apps with the one-third, two-thirds layout. Example:  In the Mail app on the iPhone, the incoming emails appear as a vertical list. Tapping on an email will open and display the content of that email. In the Mail app on the iPad, the left one-third of the screen displays the list of incoming emails while the right two-thirds displays the content of the opened email.  In order to move from the list of emails to the content of the opened email, you must physically touch the right two-thirds of the screen or use navigation commands.

Dragging Finger to Explore the Screen

The Tool bar(s) also provide critical information about the app. Most apps have a Tool bar that runs across the top of the screen (directly under the Status bar), while other apps have a Tool bar at the bottom of the screen. In apps such as Settings, the Tool bar provides information about where you currently are in the app and the Back button provides information about the previous screen. The Tool bar may provide your setting options, help button, and/or actions you can do with the app. Example:  In the Mail app, the left one-third is the list of received emails.  The Tool bar above this list includes the Back button (mailbox), tells you where you currently are (all inboxes) and the Edit button. The Tool bar on the right two-thirds (above the opened email) contains the Previous Message button, Next Message button, Mark Message button, Move button, Delete button, Reply button, and Compose button.

VoiceOver changes the gestures that are used to control the iPad so that you can hear the descriptions without activating the buttons. VoiceOver uses one, two, three and four fingers to tap, hold, drag or swipe.

Gestures work best with a light touch and a quick movement. The hand should hover with the palm just above the iPad’s surface. Movements should be small, with just the finger and/or wrist movement, not a whole hand movement. Teachers can demonstrate the movements first before asking the student to do the movement. For more Teacher Hints on how to teach the physical movements of various gestures, open the attached document: Teaching VoiceOver Gestures.

Begin teaching the VoiceOver gestures, such as the right and left flick, double tap, drag and split tap, etc. It is recommended to initially practice these gestures in the Help Mode, where VoiceOver will announce the gesture and then state what the gesture does. The Help Mode is especially beneficial for those who are having trouble with the physical movement of the gestures. Example:  Many students with visual impairments think they are making a right swipe, but the actual swipe is angled downward and VoiceOver thinks it is a down swipe.

To see a comprehensive list of VoiceOver Commands, go to:

Note: The Quick Reference Guide was created for iOS 6; there are a few commands that have changed or been added since iOS 6.

Once the student is successful with physically making the basic VoiceOver gestures and he/she understands what the command does, then the student is ready to use these commands. Start on the Home screen and practice the basic navigation commands. To view the step-by-step written activity, open the attached document: VoiceOver Navigation Gestures.

Depending on the age and abilities of the student, choose appropriate apps and practice exploring the app’s spatial layout and Tool bar options. Be sure to teach additional gestures as needed, such as scrolling up/down the page or moving forwards/backwards to the next Home screen.

Students, especially low vision students, are often slow to complete tasks. When using VoiceOver, these slow students often listen to VoiceOver state all of the VoiceOver content and the VoiceOver hints, even when the student does not need to hear all that information. When practicing right flicking through the Home screen apps, encourage the student to flick quickly, only hearing the first phonetic sound of each app. Example: Right flick quickly through Calendar, Maps and iBooks app icons – VoiceOver should only have time to say “k”, “mm”, “i”.  Be sure to model how quickly you can right flick through the Home page and then “race” your student to see who is faster!

Initially, most students benefit from a quick review of the physical gestures and navigation commands used on the Home Screen at the beginning of sequential each iPad lesson.

Teach How to Use the Refreshable Braille Display

VoiceOver gestures are useful and important to learn; however, using the refreshable braille display (RBD) and/or Bluetooth keyboard commands is significantly more efficient than using gestures with VoiceOver. Example: The rotor command is physically challenging for many students and adults; however, the refreshable braille display rotor command is easy for everyone!  Some braille students struggle and become frustrated with the gesture movements but are quickly successful with the RBD commands. Braille students should be introduced to the RBD sooner than later – especially those students who struggle with the VoiceOver gestures. For more information on using a braille display with the iPad, go to Getting Started with an iPad and Refreshable Braille Display.

Teach How to Use the Bluetooth keyboard

Braille students – after becoming proficient braille readers and writers – should also master the Bluetooth keyboard paired with the iPad.

Remember, the iPad is one highly successful tool in the toolbox! Students should have a variety of tools to choose from. Emerging braille readers should have a combination of paper braille and digital braille (refreshable braille display). Highly successful, independent, braille students are using iPads paired with RBDs in elementary school, efficiently using iPads with Bluetooth keyboards in middle school and computers in high school. There are many students who master these schools much earlier!  These successful students have access to their own devices at school and at home; they also have fully integrated these devices into the classroom. Keep in mind, older students will choose different tools for different activities: Internet searches might be done on the iPad, term papers written and edited on the computer, sending/receiving texts on an Apple Watch, using a GPS app for new O&M routes and bus travel on and iPhone. 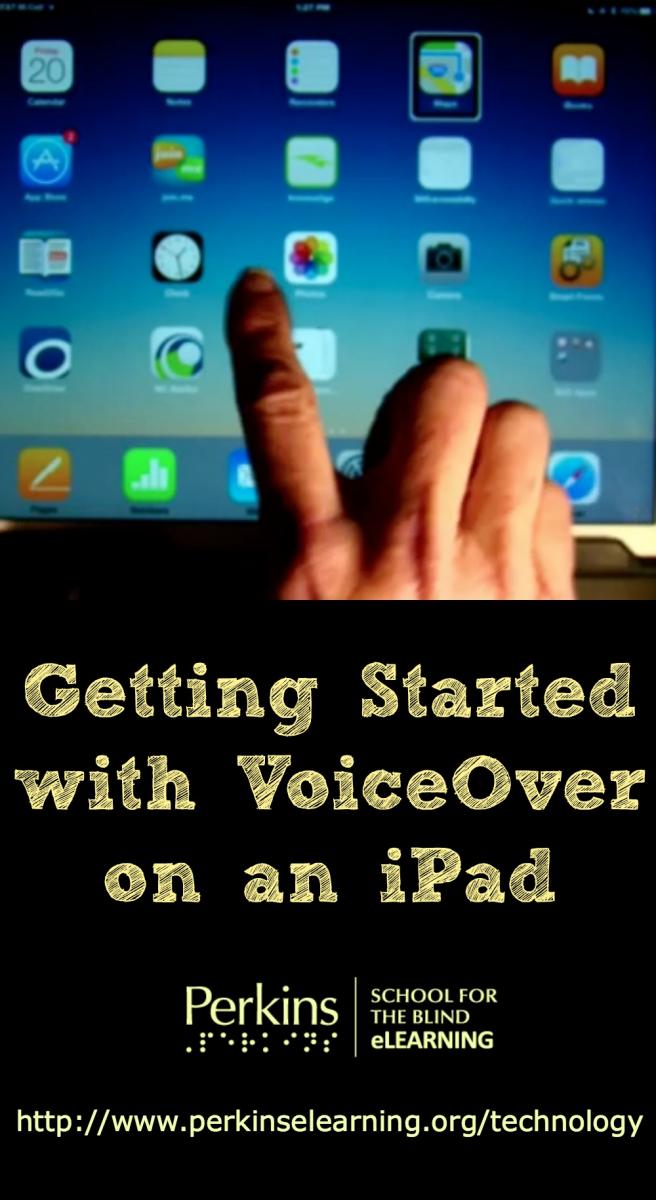