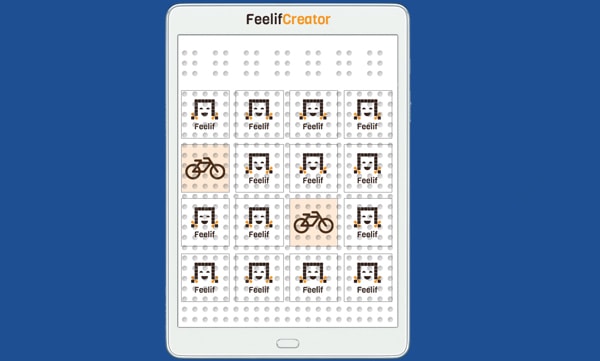 The wining European social innovative game that allows all the blind and visually impaired and normal sighted children to play together.

What is more beautiful than watching children joyfully play with each other? These are also the moments when parents have some time for themselves and for each other. In coming days when we will be more inside than outdoors, the children game also moves from the backyard into the apartment. Running outside will be replaced by more peaceful games, drawing, watching television or playing computer games, listening to fairy tales, enjoying board games and playing with toys.

If we have a blind or visually impaired child, how can we include him/her in the game so they can all play equally with each other?

Feelif offers just that. It is developed specifically for the blind and visually impaired children, but it is at the same time excellent for normal sighted children too. For example Feelif Memory is a game where we have to collect as many of the same pairs as possible. While the blind or visually impaired child will recognize the images via vibration, voice and audio description, the other children will see the picture in addition to all this. Together they can discover new sounds, train their memory and learn a lot of new things during the game. Feelif Memory is an application that we really recommend!