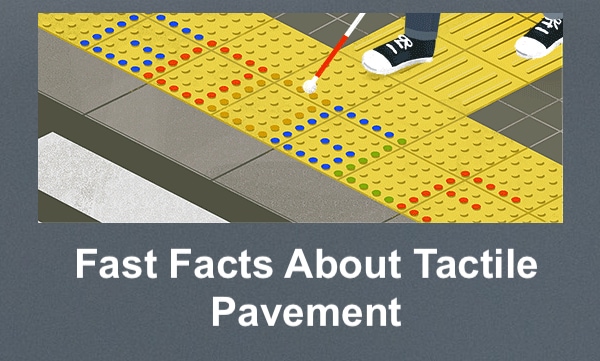 Google Celebrating Seiichi Miyake with a featured GIF of a cane traveler standing on truncated cones at a crosswalk.

On March 18, 2019, the Google homepage featured an image that shows a blindness cane user standing on tactile pavement, with the word “Google” written across the bottom of the dots. I found out about the image after several friends texted me saying that there was a cane that looked like mine on the Google homepage, and I was excited to see not only my cane, but an important invention that I use every day. Today, I will be sharing fast facts about tactile pavement and how tactile pavement helps me as someone with a vision impairment.

Japanese inventor Seiichi Miyake is credited with developing tactile paving, sometimes referred to as tenji blocks, back in the 1960s. He came up with the idea of creating tactile pavement in 1965 as a way to help a vision impaired friend with navigating public spaces, train stations, and stairs. Tactile pavement was first installed in Okayama City on March 18, 1967, and was made mandatory  for all rail stations about a year later.

What is tactile pavement?

Tactile pavement is a type of pavement that features raised lines, domes, or other textures to communicate safety information to people who are blind, have low vision, or another vision impairment. Large domes or lines are designed to act as a stop sign, while more subtle lines indicate that a path is safe to walk on. Tactile pavement can be found in indoor and outdoor settings in many areas throughout the world.

When did tactile pavement become a thing?

As previously mentioned, tactile pavement has been used in Japan since the late 1960s, but it wasn’t until the 1990s that it began to pop up in western countries. In the United States, tactile pavement started to become commonplace after the passing of the Americans With Disabilities Act of 1990, a piece of legislation designed to promote accessibility to public spaces. Around the same time, countries such as Canada, the United Kingdom, and Australia began adding tactile pavement to their paths as well.

Where can I find tactile pavement?

Tactile pavement can be found in many different locations, including:

Why is tactile pavement brightly colored?

Most tactile pavement is a different color than the rest of the path, especially in outdoor settings. This is to help provide increased contrast for people that have low vision or otherwise have some usable vision, so they can see where the path is. This is especially helpful for people with vision impairments that do not use canes or other mobility tools.

Who benefits from tactile pavement?

Tactile pavement is designed to help people with vision impairments such as blindness and low vision. Having access to tactile pavement allows people to travel safely and independently, while ensuring that important safety information is conveyed in a non-visual way. Tactile pavement can also benefit people who are otherwise distracted, as they can feel the dots or lines with their feet as they travel.

What does tactile pavement feel like when using a cane?

I use a rotating marshmallow or ball tip cane whenever I go out on my college campus, because it provides a mix of auditory and tactile feedback and it is very durable. Whenever my cane glides across tactile pavement dots, it feels like a speed bump, telling me that I need to pay more attention before I cross the street or continue navigating.

The more subtle patterns feel like I am running my cane over a small grate or bubble wrap and that I might benefit from using additional applications or tools for navigation.

There are other types of tactile pavement that are more decorative. When I was walking through the airport recently, there were small bronze fish on the ground that created a path to a nearby gate, which was incredibly helpful. I could feel the ridges of the fins and details of the scales through my cane and follow the path easily.

When does tactile pavement help with navigation?

I find that tactile pavement is the most helpful for me in two scenarios:

I am navigating through a busy area with lots of traffic, and I have no idea where to cross. Once I feel the tactile pavement with my cane, I know that this is a safe area to cross and I should watch/listen to see when it is safe. In addition, when I am waiting for the Metro, I can use the tactile pavement to ensure I am not standing too close to the edge.

At my college freshman orientation, I was known as the girl who fell down a large flight of stairs behind the student center- twice. Since I don’t have a lot of feeling in my feet as the result of a brain condition called Chiari Malformation, I wasn’t able to feel or see the edge of the stairs, which resulted in me coming close to injuring myself multiple times. Now that I use my blindness cane, I can use tactile pavement and tactile markers to find the edge of stairs and ensure that I don’t fall down.

Where should tactile pavement be added in the future?

If I could wave a magic wand and have tactile pavement appear anywhere I wanted, I would request that it be added to the pedestrian paths on my college campuses to show which direction people walk on each side, as I have accidentally collided with many people. I would also be excited to see it in front of campus landmarks as a way of mentally mapping where I am.

Why is tactile pavement important?

Tactile pavement helps me tremendously with navigation as a blindness cane user, and I am grateful to live in an area where tactile pavement is very common to find. In the future, I hope that more places will add tactile pavement as a way of communicating information to people with vision impairments who may not otherwise see visual signs.

Thank you Google for highlighting something that I use every day, and for sharing the stories not only of inventors, but of the assistive technology that helps me to lead an independent life.