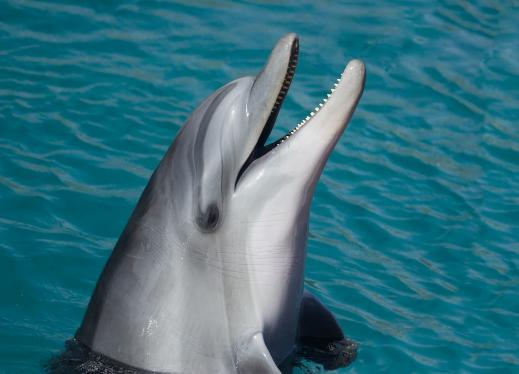 Dolphin Talk: How Do Dolphins Communicate with One Another?

A student from Perkins School for the Blind looks at how dolphins communicate with each other.

Perkins School for the Blind Secondary School student Isabella Scott’s science fair research experiment “How Do Dolphins Communicate with Each Other?”

“How do dolphins communicate with each other?”

What I Already Know:

Dolphins use echolocation to catch their food. Dolphins swim in a group called a pod, and somehow communicate with each other.

Echolocation is an amazing way for dolphins and other ocean animals to find their food. Echolocation works like an echo. Sound waves are sent out, and eventually hit an object then they bounce back giving the host information. They can tell how far away an object is, how big it is and if it is moving below them or above them. Body language is another way that dolphins communicate. Tale slaps on top of the water, for example, can be used to warn other dolphins of danger or show playful behavior.  Whistling and chirping sounds are a way for dolphins to talk. Each dolphin creates different frequencies. This allows other dolphins to hear who is talking. Dolphins have many ways of communicating but each time I read more and more of how they talk, it always amazes me. More research is always needed to dive deeper in the ocean of echolocation.  The world is full of many natural beautiful things and echolocation is truly one of them.

Although I learned a lot about dolphins, I still have questions. I hope to learn if it is possible for humans to create the different frequencies of dolphins on a machine and try to communicate with them.