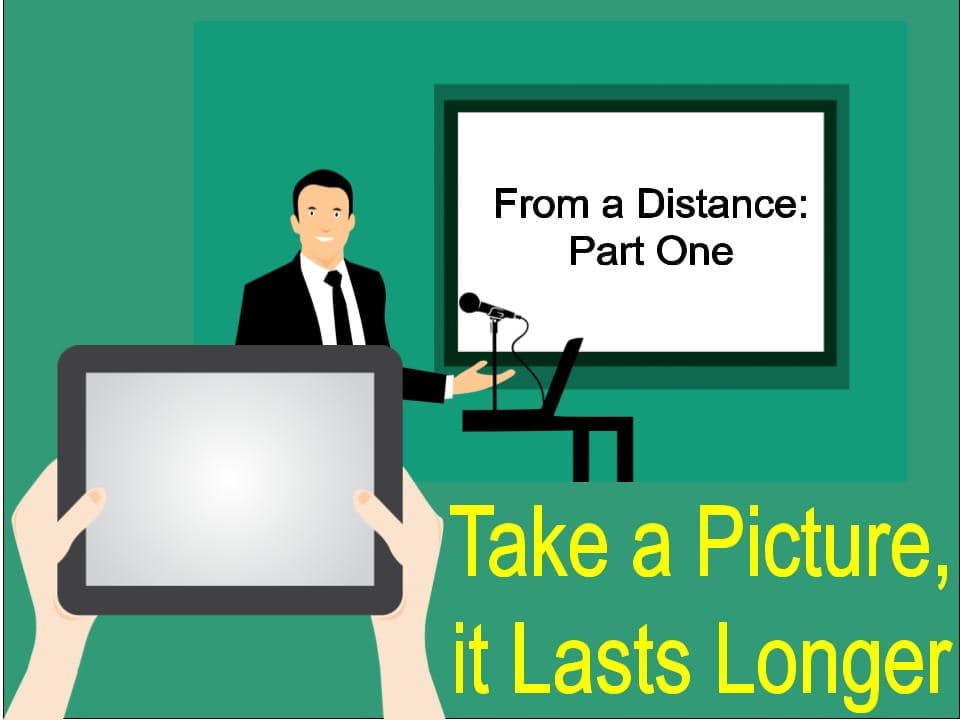 From a Distance Part 1: Take a Picture, It Lasts Longer

This article is the first in a three-part series featuring ways for students to access classroom materials at a distance.

I’ve always had low vision.  I never knew anything different, and frankly I think a lot of the experiences I had as a young woman with low vision shaped who I am today so I’m not knocking it.  It’s just a fact. And as any young person in a classroom that happened to have low vision, I had my share of challenges.  My least favorite was accessing the board.

For those of you who are old enough to remember rolling down your car windows with a crank, sending faxes instead of email, and using phones that (gasp) had to be attached to a cord to function will probably remember blackboards.  Those of you who have always had normal vision probably don’t cringe when you see them the way I do.  I genuinely hated blackboards.  Not only was the chalk hard to see in the first place, but after the writing was erased half a dozen times, it was even harder to see what the teacher wrote over the residual dust.  Getting up to read the board was distracting to myself and others.  Don’t even get me started on the lighting and glare issues.

When I was maybe in fourth or fifth grade, I was introduced to a monocular.  I think my teachers thought it would help me read the board from where I was sitting, and at times it did.  But it was a lot of work to find what I needed to see, focus the device, shift my gaze so I could write it down, then start over.  And long passages weren’t any easier because every time I took a breath, my arm or focus shifted just enough to make me have to start all over again.  Holding my breath became a necessity (which was probably why I did so well on the swim team now that I think on it). Add to that the pressure of making sure I had written down what I needed before the teacher erased the entire thing and I had to try to fill in the blanks of what I missed.

I don’t bring up these challenges to garner any sort of sympathy . . . actually, the opposite is true.  I think it’s important for teachers to know exactly what kids are working with when they are not given an opportunity to use technology to access classroom materials.  It’s stressful both emotionally and physically.  That dry gritty tired eye fatigue feeling is not what anyone wants at the end of the day.

Fast forward to 2019.  Elementary students with low vision have other options for distance viewing that don’t involve making your arm into a makeshift telescope holder or constantly asking the kid in the desk next to you whether the first line in that math problem contained an eight or a zero or which word was underlined in the sentence the teacher wrote on the board.

So what are some of those options?  So glad you asked! Because this series of articles will focus (pun intended) on accessing distance material in the classroom.

As the name of the article implies, this first solution is using a tablet (or similar device such as a smartphone) to take photos of the board or other material presented at the front of a classroom.

As relatively “low tech” as this solution is, it’s my standard and my go-to.  Almost every student has access to a smartphone or tablet, whether it is their own or on loan from their school.  So why not take advantage of that camera?

Let’s back up…with all the technology innovations, why is this option still something so frequently used?  Well, let’s look at it logically.

We live in a visual world.  And most people like staying connected by sharing that visual world virtually.  Everywhere you look, there’s a celebrity with an Instagram feed (who also probably has a dog with his/her own Instagram feed but I digress).  To keep up with the increasing demand for clearer and better pictures by the average American, tech companies have been under increasing pressure to make the latest and greatest cameras more affordable.  And, logically, they are integrating these cameras into phone and tablets.  People want to post that great senior prom picture or their grandchild’s tap dance recital and they want those pictures to be magazine worthy.

As cameras got better, the ability to zoom in on pictures without them becoming blurry and pixelated increased.  At the same time, tablets became more and more of an educational tool and not just a way to play solitaire hoping the teacher didn’t look too closely at your screen.

Teachers and students discovered that taking pictures of content on the board (and by this time most classrooms had whiteboards) was a fantastic solution!  Pictures could be saved, enlarged, and more easily copied if necessary because the tablet was on the student’s desk and could be enlarged, cropped, and filtered as needed.  And better yet?  The tablets were mainstream technology that students could use without sticking out like pink polka dotted elephants.

Over the years, using the tablet as a portable camera to access class content from a distance changed in small ways, but generally has stayed the same for several years.  And that’s a GOOD thing!  It’s a skill that can be generalized across environments and even, for the most part, across devices since touch screens employ the same basic gestures.  So that student you taught to use a tablet to photograph the giant story map on the whiteboard can use a tablet or phone to take a picture of a sign across the street they can’t quite read or access the fast food menu before placing their order.

What smartphones and tablets have the best cameras for accessing distance materials?  It’s hard to say since cameras are constantly changing and improving.

So you’ve got your tablet with a relatively decent camera.  What more do you need?

It might surprise you to learn that a few other items might make the difference between your tablet (whatever the brand) being an expensive paperweight and a useful tool.

A Tablet Holder or Stand

If your student is in early elementary school, it might be asking a lot for him/her to hold up a tablet to take a picture.  Their hands might not be large enough to hold up the device and take the photo at the same time.  Or if your student has mobility issues, he or she may not have the strength to hold the tablet at the necessary height.  Either way, you’re probably going to want to look at tablet stands and holders.

A stand or holder can be used to hold the device at a given angle and allow the student to take a picture without needing to hold it steady or at a specific height. There are literally hundreds to choose from various online retailers, but here are a few places to start:

Honestly, you can just Google “tablet mount” or “iPad mount” and you’ll get more options than you can shake a stick at…

Kids will be kids…and kids drop things…often.  So investing in a sturdy rugged case for your tablet is a wise move.

If you thought there was a wide variety of tablet stands to choose from, the variety of cases is even larger.  And not only that, but you can get a great case for a good price at pretty much any place you can get a tablet.  Again, you can just do a search online for the specific model of tablet you have (such as an iPad Pro 12.5 screen or a Google Pixel 3) you will find more than enough options, lists, opinions, and recommendations.

OK, strictly speaking, a bluetooth keyboard isn’t necessary to take pictures with a tablet.  But once your student is taking pictures with that tablet, he or she might want to do all their notetaking in one device where font can be enlarged and text more easily manipulated.

If your student has a keyboard and is using apps (such as Google Docs or whatever the school he/she is attending is using) to do their daily work, they won’t have to shift gaze nearly as much.

Not unlike the tablet cases discussed above, there are MANY options for bluetooth keyboards.  But keep in mind that some keyboards might be better suited for students with smaller hands.  Also, some students like the keys that provide some sort of physical feedback (for lack of a better term, let’s call them “keys that click”) while others might like the more cushioned or rubber keyboards that make much less noise and give less feedback.

Some Final Thoughts: If it Ain’t Broke, Don’t Fix it

There’s a reason that taking pictures and zooming in has been a staple in the low vision toolkit for so long.  And that’s because it works. It uses, mostly, mainstream technology and doesn’t vary a great deal across devices.  Updates may improve the quality of the image and how it is accessed, but the usual gestures such as “pinch to zoom” remain consistent.

So the next time you as a teacher are trying to think of the next high tech solution to implement with your low vision kiddo, you might not need to look any further than a few inches in front of you (because, statistically speaking you are probably reading this article on a tablet or smartphone).

Editor’s Note: This Paths to Technology post was first published on June 5, 2019; the information is so beneficial for students with low vision that it is being reposted!