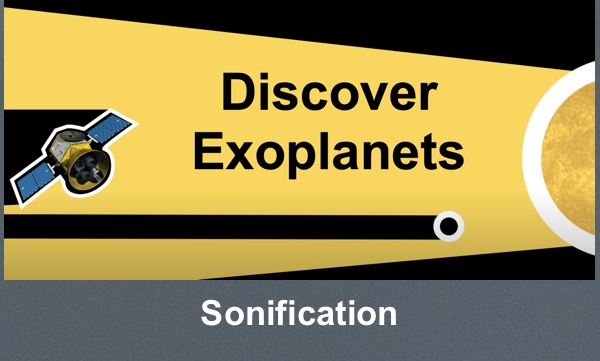 Space enthusiasts - be the first 5 students to complete the activity and receive a 3D astronomical model!

Some of us folks who are soundly middle aged can recall a time when finding planets outside our solar system was the stuff of science fiction. In 1995 the very first exoplanet was discovered orbiting a star using a technique called the transit method. As a planet passes in front of a star or transits, the light from the star dims just a little bit. When we sonify the light measurements over time, we can hear the dimming and even determine the orbital speed and size of the planet.

This video by the Astronify group at Space Telescope Science Institute in Baltimore Maryland is the second in a series that is designed to teach young astronomers how to interpret the light curves. Hear the Sound of Light was first in the series. If you missed that video, check it out before exploring Exoplanet. It explains what sonification is and why it is important to the field of astronomy.

If you are watching this video with a young person, see if they are able to construct a model on the kitchen table of what is happening in space to produce the light curves you hear in this video. Construct  your model and if you are one of the first five people to send me (Kate Meredith of GLAS Education) a picture, I will send you a 3-D model of something astronomical. Post your picture here or email them to [email protected]