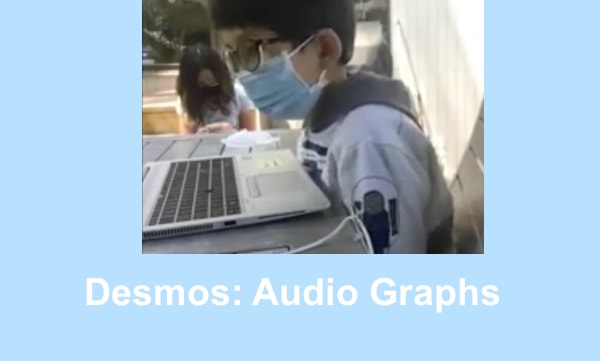 Desmos, an advanced graphing calculator, is a web application and a mobile application and Desmos is accessible with screen readers! It is now an embedded tool on the calculator portion of the digital SAT, PSAT, ACT, and NWEA MAP Growth tests. Desmos is also used on year-end tests for 27 states (and counting). When should a student with visual impairments be introduce Desmos?

Yue-Ting Siu shares her introductory to Desmos audio graphs lesson with her second grade student. In the video, the student learns how to turn audio trace on/off and how to play the audio trace. Desmos’ Audio Trace is mode allows a student who is blind or low vision to explore the graph by sound rather than by sight. (Note: Audio Trace is also known as “sonification” in other apps.) Watch the video below and see how exciting listening to an accessible graph can be! (smile)

Note: In the video, the student imitates the sound of each graph. The last graph, he draws a “U-shaped” graph on the table! Ting goes on to share that after the video clip, mom asked, How do you know that the graph is a “U” and not a “V”? The student sigh a big sign, and said, “Of course it’s a “U”. If it was a “V” the sound would be a point.” Yes, this second grade student truly understands these audio graphs!

As always, students should be introduced to tactile materials before transitioning to the digital equivalent. Ting shares that her second grade student had many experiences feeling and exploring line graphs using tactile graphics. Below is Ting’s multi-week lesson plan in her own words. . .

Here is a general layout of my multi-week lesson plan for introducing a second grader to sonification and data visualization (video shared with parent permission):