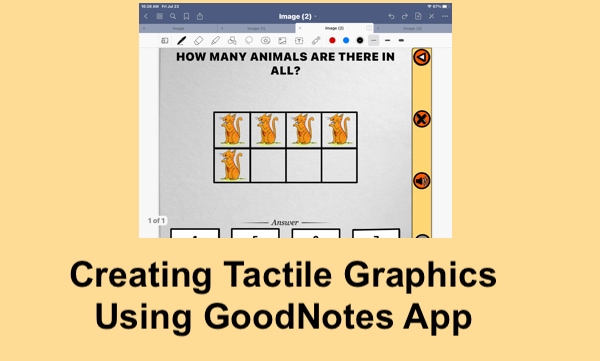 Step-by-step tutorial on how to quickly and easily create digital images to run through a PIAF or Swell machine.

A tactile graphic machine, such as the PIAF or Swell machine, makes raised line drawings on special paper, called capsule or swell paper. The heat in the machine causes the lines to swell, creating tactile graphics.

Software to create images for the tactile graphic machine

I spent days researching various sketch, art and paint programs, along with photo programs, for both the iPad and Mac. The main criterion was to find an application that is easy for educators to use, and that contains all the basic features needed to quickly create images for tactile graphics machines. This application should be intuitive and simple to use, without an overwhelming number of features. (Honestly, the sketching/paint apps that I reviewed required watching numerous detailed tutorial videos and/or reading manuals/blog posts; these apps took dedicated time to find the features that I needed to complete my task!)

After trying numerous applications on a computer and tablet, it quickly became apparent that using a touch screen tablet is hands-down the easiest way to “draw” compared to manipulating a computer’s cursor.

Image of the GoodNotes Tool Bar:

Note: Double tap on a button to see all the options.

The GoodNotes app quickly became my favorite choice due to its user-friendly and simple design – and GoodNotes has all the features required to complete the task! GoodNotes is currently $7.99 in the App Store and is available for iOS and Macs; it is not available in Google Play.

GoodNotes in the App Store

Using a stylus is significantly easier than drawing on a touch screen using a finger! There are currently two Apple Pencils available; if purchasing an Apple Pen, be sure to check if it is compatible with your iPad! Note: There are other stylus brands available. See the list below to identify which pencil works with which iPad:

The Apple Pen 1 as a removable cap and recharges by plugging into the iPad.

The Apple Pen 2 does not have a removable cap; magnetically attaches to thte iPad to charge.

The video below is a step-by-step tutorial on how to create a digital image for a tactile graphics machine using the GoodNotes app. Since not everyone has access to an stylus, the videos were created with finger gestures. You can imagine how easy it would be to use a stylus, as the tip is more defined than the width of your fingertip. It can take a couple of tries to start/stop tracing when using your fingertip!

Image of tactile graphic created in the video, with an outline of the grid, answer choice boxes and buttons down the right side of the screen. This image is ready to be printed on capsule paper and then sent through the tactile graphics machine.